The Bandcamp machine continues to roll ahead at full steam. With more and more label-based material entering the waters, it’s even tougher to find the smaller releases, though we at DR are always happy to help widen the search. This month we cover Cognizance, Empirine, Human, In Defilade, Moaning Silence, Norseth, The Offering, Ogarya, Paladin, Torturous Inception, and Walk in Darkness.

Coming in hot from their last EP, Illusory, the technical juggarnauts in Cognizance have decided to give us a new taste of material with “Ether of the Void.” Those only one track to dig into, it shows the band firing on all cylinders. Catchy harmonies, frantic speed, and a good sense for groove all find their way into the track, with plenty of technical material for fans to dissect. The band has made a name for themselves with a number of short EPs, and a new sample every few months may in fact be the right approach for this complex material.

Combining more burly death metal segments with floaty atmospherics is what makes Empirine’s sixth EP such a charmer. There’s a bit of Swedish flavor in tracks like “The Nameless,” but it switches over to more progressive moments, with enhanced clean vocals (read: vocoder) and keys, in a way that will keep you on your toes with its blend. There is, of course, melodies to be had in the heavier segments, and the meaty riffs aren’t above playing with the synth elements as well, which helps to merge the two sides of the act. All in all a solid piece of metal that absorbs from influence from a number of sources without veering too far off base.

Early last year saw the release of the excellent Cerebral Inwardness, and Contemplating Soliloquy shows up as its meaner and nastier big brother. All of the technical and cosmic leanings from the last go-round are here, but overall, there’s a heavier and darker component to the album. A stronger production, which gives the guitars more leverage while maintaining an ear for quality, is a major highlight and serves to bring the band up a few notches in the eyes of fans of those looking for more Obscura, The Faceless-type releases. A great step up in every way.

Self-categorized as militant blackened death metal, it seems an apt title given the thunder and the fury behind Rulers of Famine. Intense and in-your-face aggression a la Nile or Behemoth merges with a combination of blackened vibes and a somewhat old school yet modern approach. The type of album that hits hard and hits often (“Contaminating the Waters” is fittingly frantic), the surprise comes with longer tracks that introduce more melodic elements (“Subdue the Righteous” or “Sworn to Expose”), which doesn’t get in the way of the militaristic approach. Dominatingly heavy, but never at the expense of the song itself.

Alternating between more somber doom and depressing yet upbeat gothic moments, Moaning Silence manage to hit a solid cross between the two. Some raspier shouts alongside male and female cleans help rounding out the sound, finding the right tone as the situation arises. Some may be drawn to the band’s cover of The Beatles’ “Yesterday,” which takes a more gothic feeling to it while carrying the spirit of the original. “Flaming Fall” comes out as the strongest point, with sometimes crunchy, sometimes melancholic riffs and keys varying the landscape while Eleni Kapsimali’s vocals soar above. There’s a unique vibe here with the potential to grow with their next outing.

To some like this scribe, the world can’t be filled with too many bands emulating the melodic death metal sound. Norseth take their stab at it plain and simple – lots of catchy melodies, some upbeat riffs, and energetic vocal shouts. A blend of classic melodeath with a more modern edge, but swinging firmly to the harder side of things. So soundwise, you know what you are getting into here but it doesn’t make it any less worthy of giving it a click. Straight-ahead melodic death metal has its place, and if that is your philosophy, you’ll definitely find some enjoyment here.

It’s always pleasing to find a new act that choses to go their own way rather than follow the crowd. The Offering slyly mixes elements of traditional heavy metal and power, melodic death metal, and hard rock and wraps them with some modern trimmings. It’s an approach that feels classic yet fresh at the same time. Just take opener “Rat King,” which opens with a classic metal scream and almost Nevermore feel, only to shift into more extreme territory and slick grooves. The shifting continues, alongside some strong solo and lead work, as well as plenty of melodic hooks to sink your teeth into. If one thing is certain, it’s that The Offering have the potential to make a massive mark in the scene as they move forward.

While one may not immediately think, “brutal death metal with sci-fi leanings,” is the most original concept going, you’d be wrong to dismiss Ogarya on that premise. The band’s oppressively heavy assault (Abnormality comes to mind here) is laced with both technical riffage and subtle melodies, which turns out to be significantly more memorable than what most of the genre turns out. There’s symphonic/sci-fi atmospherics as well to add to the flavor, and the male/female growls add a slightly unique spin as well. Ubiquity is a combination of devastating brutality with a surprising amount of memorability, and a real gem for death metal fans looking for a new band to check out. Keep an eye on this one.

Some solid timing to release a first offering as guitarist/vocalist Taylor Washington is currently filling in on bass for Necromancing the Stone, this two song demo hits all of the melodic metal marks. Plenty of classic guitar fireworks, serious hooks, and shred characterize the material, with a feel that is both vintage and modern all at once. Washington’s vocals align to the music at any given moment, from thrashy shouts to traditional falsettos to more extreme raspy moments. Seems a tease to hear only two tracks with this much energy, but with a sound like this, it’s simply a matter of time before the right label gets wind of it and this band hits the stratosphere.

Merging the band’s last two EP releases, Headfirst into Oblivion and Void, this compilation may not be a necessary one from a fan perspective, but for those who missed out on either release it’s a chance for you to catch up and enjoy an evening’s worth of brutal, slamming death metal. Certainly one of the more underrated performers in this category, Torturous Inception provide strong songwriting (something that can be hit or miss in slam) and a diverse tempo selection from blistering to churning into a combination that works, even if the format is familiar.

Take the Within Temptation/Epica model and throw some added gothic vibes to it and you’ve got a good impression of what to expect with In the Shadow of Things. Not that it’s a bad thing, as the gothic influences do veer it further sideways than many other acts, and the vocals have the charisma to position the band a few slots higher in the rankings as word gets around. Things move from the more melodic “Last Siren” to more triumphant material like “Walk like Heroes” and there’s no lack for hook-y material that sticks in your brain. Worth looking into if you enjoy the style. 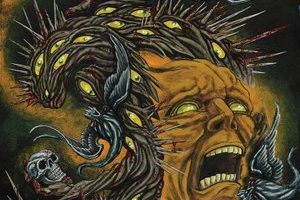