Shores of Null – The First Drop 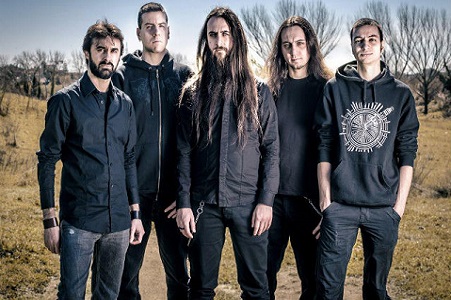 As with most albums of significant value, there’s usually the “a-ha” moment, the pivotal point during the course of a listening session where interest in a band becomes belief, then turns into total endorsement. For Italy’s nascent Shores of Null, it comes via the tail-end of the song “Ruins Alive,” where after the band gets through its patented Alice in Chains-meets-Katatonia-meets-Daylight Die song romp, an unexpected blast of melodic death metal blows through, a virulent, exciting segment of speed-picking that recalls Gothenburg glory of yore. All this, in one song, mind you.

The band’s Quiescence debut (Candlelight) has rapidly emerged as one of the year’s best sonic forays, a multi-faceted effort with a constant thread of melody, atmosphere, and hooky gloom. This uncanny balance is even more impressive considering the band will turn a year-old in April, having formed from several previously-established Italian underground metal bands. Guitarist Raffaele Colace starts us off:

“Dave [Straccione, vocals] and Gabbo [Giaccari, guitars] have known each other for a long time, they’ve toured together with their respective bands, Zippo and The Orange Man Theory, and always fantasized about putting up a band together,” he begins. “I played with Mens Phrenetica, but we couldn’t express the darker and gloomier atmospheres we wanted with our mother bands, which are/were so different from what we do with Shores of Null. Actually, it was the need to create a somehow Gothic, melodic, and at the same time, crushing sound, that made it all start. Emiliano [Noumeno, drums] and Matteo [Il Grande Scisma d’Oriente, bass] joined the band later on, leading to the actual lineup.”

Shores of Null calls Rome home, and while the capital of Italy is far from a metal hotbed, it does allow for some quality networking, of which the collective members used to their advantage when putting the band together. The only non-Rome resident would be Straccione, who lives two hours away in Pescara, but Colace says forming the band without him simply wasn’t an option. Same goes with not learning from the past.

“It’s not exactly about mistakes, as instead relating to the right people that share the same passion with you. We all have done so many sacrifices devoting most of our time to music, and everyone’s desire has always been to achieve something beautiful. If you combine the will to play, the will to create and a good amount of hard work, all the sacrifices you’ve done will eventually pay off.”

According to the band, many of the riffs found on the debut were created a year before the band was realized. Once Straccione was integrated, Shores of Null quickly found its sound, even if finding said sound appeared harder than it really was. “No, it wasn’t hard at all,” chimes in Straccione. “We simply gathered together all our darker influences and channeled them into a sole musical meld. You can hear doom, black metal, melodic death, some gothic influences as well, but you can’t pick up just one genre to define us. We just wanted to sound gloomy, solemn and epic, and that’s what came out.”

Not to minimize the importance of the rest of the band, but Straccione’s vocals should be lauded for being such a difference maker. Utilizing a similar vocal cadence as the Alice in Chains pair of Layne Staley (RIP) and Jerry Cantrell, Straccione effortlessly plaits one memorable vocal line after the next, including standout chorus choices on the aforementioned “Ruins Alive,” and “Quiescent,” which is perhaps his best moment on record. Point being, Straccione is a European vocal revelation.

“We knew Dave’s vocal talent already and obviously we were aware that he would have added his own peculiar style to the songs,” relays Colace. “I admit that I’ve always imagined those songs with a death voice, but I’m very happy that what I thought has only remained in my head. My musical tastes as well as Gabbo’s are pretty similar, and even if our personal styles are quite different one another, combined together they’ve led to the creation of that stream of notes. Clearly Dave completed everything with his fantastic vocals.”

“I prefer clean vocals above all, because I think you can explore more with melodies than with growls,” adds Straccione. “I’ve never been a death metal singer and probably I will never be, but this project required some heavier parts, so I challenged myself and came up with this hybrid use of vocals. It’s all about the balance, my friend.”

Wrapping up, Shores of Null recently partook in live dates Primordial and Saturnus, but have set their sights on expanding their reach across Europe. And as a proper marketing tactic for the run-up to the album’s March release, the band released a video for the above-mentioned “Quiescent,” which is about as pro of a video as a fledgling underground band can produce, furthering the notion that Shores of Null are all about quality.

“When you believe in a project as we do, you want to achieve the best results possible,” finishes Colace. “And you don’t need to call Stanley Kubrick to make a decent video, there are plenty of underground artists that know how to do a great job. The concept of the video was an idea of Martina Lesley Guidi and she filmed and edited it together with Francesco Corti and Luca Crescenzi, while Francesco Giaccari took care of the visual effects. Of course we enjoyed making it.”