Dead Rhetoric: Tell us how you were able to get your father to perform sax on “Sleeping Gods Awake” – and how proud that moment must have been to bond together on that composition?

Krais: He was watching Battlebots or something like that on television, and I was like ‘Do you want to record some sax on the album?’ and he said, ‘yeah’. We set up the microphone, and we sent him the track to listen to where we wanted the solo to go, and we recorded it. Sean had already recorded his solo, and his comes right after. He listened to it, and decided he was going to try to do something a little bit similar as to what he was doing – we gave him the headphones, he took out his saxophone, and recorded it. It was awesome. It was a proud moment – this is really cool, and we have a picture of him that we keep of the recording – I think it was more funny though because of the situation. The reason behind that is John had written that song as a wind ensemble piece – and in a wind ensemble, you have saxophones. He had it as a MIDI-programmed saxophone solo, and we decided to ask my dad if he just wanted to play it and record it. We scrapped that one and he did something else, we let him go for it.

Dead Rhetoric: What have you had to place more work on – your vocals or your guitar playing within the band?

Krais: I’d say right now I’m focusing more on the vocals. Not that the guitar playing is not as important to me, but it’s… the vocal stuff is becoming more and more demanding as we are going on. I’m trying to make sure that when we perform live, we have the performances that we are delivering the best quality that we can. The guitar, I do practice guitar – I’ll do my scales and things like that. And I’m practice the songs when we have a show, a recording, or a performance coming up. For now, I practice more of the vocals – I come from a violin background so I know how to warmup and translate these ideas to the guitar.

With that we have a show coming up and we are playing on the 10th of September with Hammerfall in Brooklyn, and Taylor Washington from the band Paladin is coming up to play my guitar parts for that show. I can do both the guitar and vocals, and have been doing it from 2007 forward, but now that the guitar parts … when we write the songs, everyone is writing the music. Sometimes we collaborate, and sometimes we write a whole song alone. We each have different guitar styles. For instance “Fly With Me”, the guitar parts were written by Ryan, and he has a different guitar style than typically the way Sean or I would write. In order for it to be played 100% live and get the vocals right, I want to make sure we cover all avenues the best way I can. If this is going to be the future of the band where I’m just going to be singing live or playing guitar too, we don’t know yet.

Dead Rhetoric: Located in Long Island, New York – how do you believe your band is accepted on the local front when you perform live? Has it been a struggle to find the right shows to be a part of, considering the style you play and the variety of bands that exist in the local NY scene?

Krais: In Long Island, we have about a snowball’s hope in hell of playing a show. There’s no power metal here on the island. In the early days when we were performing it was like a satire or parody feel for the reception that we were getting because people didn’t know what it was. It’s pretty much metalcore, tech death and hardcore stuff on Long Island. They would love it, they loved the solos- but it was almost a tongue in cheek thing. We are right next to New York City, and that’s where all the bands go. It’s like a double edged sword living on the island – on the one hand, we are never going to find a show that fits us on the island 100%, but on the other we live so close to the city, it means all the big bands come through. That’s been my strategy- we’ve played with Angra, we’ve played with Rhapsody, we’ve played with Primal Fear, Unleash the Archers, Crimson Shadows, Hammerfall – because we are so close to the city.

It’s 40 minutes to go to New York City- and Dragonforce is playing, so let’s see if we can get on that bill. And now, that’s the next phase of what we are doing. It’s been working so far so we’ll see where that takes us. Besides Virgin Steele, who have been around since the dawn of time, there is no new power metal bands on Long Island, I’d say we are the lone wolves.

Dead Rhetoric: What do you consider the biggest challenges that the band faces currently to ascend to the next level in terms of popularity and respect?

Krais: I would say the biggest challenge is just getting the word out there and promotion. So far everything we’ve done and are continuing to do is all grassroots, sharing it, us saving money to do some promotional ads online. Just getting the word of mouth going – people sharing, it’s working so far. We’re all just so happy that the response that we’ve gotten so far is just all organic. We did run some ads when the singles came out, but when the album came out it’s been all people sharing it- we’ve been getting reviews like with your website, and trying to reach out to as many people as we can to review our album. People have been contacting us nonstop, wanting to upload our video to their channel, and we want them to post it and share it. The biggest challenge is getting the word out there enough so that people want to check us out live, and a reason to go out and play other areas. They want us to come out to other parts of America, the Netherlands, Russia, South America – it needs to make sense for us to do this.

Dead Rhetoric: Considering the development of power and progressive metal through the internet, social media platforms, and the community that developed as a result worldwide – where do you see the state of power/progressive metal today?

Krais: Today I see it on an upswing. It is definitely going to… we are going to see it completely take off, maybe not in the sense that it was in the 1980’s with the glam bands. I think in America we are going to see a lot more bands trying to pull off the power metal sound. In my opinion it’s going to be more like a Beast in Black or Battle Beast kind of thing, the pop-ish sound with the power metal drive to it. It is going to be the gateway for listeners into the power metal sound, we are probably going to see a lot of bands that have that sound. On the symphonic side of things, that is developing – I hope that will be a newer craze for fans. I really believe progressive and power metal is on an upswing and is going to get a lot more popular. There will be more bands in that style popping up instead of the djent bands. Dragonforce kind of started it, but I don’t think it was the right time – it was but it wasn’t for a lot of bands to come out and playing all that stuff. It will probably be a gradual thing- in the next ten years I think you are going to see a gradual upswing and rise in popularity for power metal.

Dead Rhetoric: How far would you like to take ShadowStrike in terms of a career? Are you realistic about the amount of work it takes to make a living solely off the music – especially in power/progressive metal?

Krais: We are going to go all the way with it, as far as we can take it. I would say that’s another reason why the album took so long, we are all going to school and we have other jobs/careers – we understand. Our parents are music educators and they know the music world. Music is great, but you have to make sure you have a backup plan, as that’s how you end up funding this. We got the whole spiel from them growing up. We are not thinking we are going to be cruising around with Yngwie in a Ferrari anytime soon. We are going to take things as they come, we are going to save as much money as we can for the band, and if we are blessed enough to get to that point then hey, we are going to embrace it and enjoy it. It’s all you can do – keep moving forward and keep being positive about it and enjoy every moment of it.

Dead Rhetoric: What do you like to do in your down time away from music as far as passions, hobbies, and interests?

Krais: If you couldn’t tell, we all love video games – we all like to hang out and play video games. We will grab drinks, John and I like sports so we like the Mets and try to go to a baseball game every now and then. I’m a huge hockey fan, I love the Islanders and I will try to go to some hockey games. We all like having bonfires and barbeques together, stuff like that. We like hanging out with our friends, we will have fun, very down to earth hanging out. We have acoustic instruments and sometimes jam, hanging out. Nothing too crazy, Sean is a librarian in New York, he loves to read.

Dead Rhetoric: What does the future look like for ShadowStrike now that the album is out as far as shows, tours, festivals, videos, other promotional endeavors?

Krais: It’s looking really good, actually. I can’t say anything officially, we are working on a lot of things. We have the one show on September 10th with Hammerfall, which we are really excited about. We are trying to some other shows, some festivals, things like that. It’s all in the works. In the coming weeks and months things will most likely start coming out, stay tuned. We have already started writing for the next album, I don’t know when it’s going to be done- but we are already working on it. 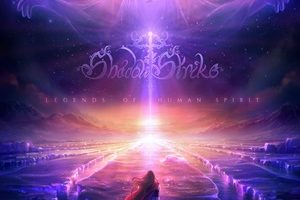