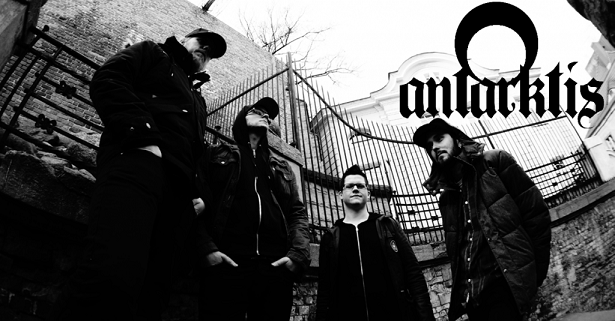 The annual log-jam of albums has begun, or rather, it’s fall release season. Such is our duty when September kicks-off: Tackle as many albums as possible while not leaving any behind. A near-impossible task, but we try our hardest, starting with this month’s Rapid Fires featuring Antarktis (pictured), Devastation, Fatal, Fire Strike, Half Blood, The Hate Colony, Hostilian, Lascar, Low Estate, Nekrohowl, Silius, Street Sects, Thundershield, Under Assault, Tetrarch, and Wait Hell in Pain. 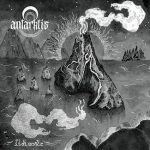 Antarktis – Ildlaante (Agonia)
Good company here, that being Björn Pettersson (In Mourning) and Tobias Netzell (In Mourning, ex-October Tide), two men on the frontlines of Swedish dark and progressive metal. Clearly with some kind of Cult of Luna itch to scratch, the men joined forces to create Antarktis, which, rather flagrantly, takes on the famed post-metallers sound of old. Taking direct cues from the Salvation (2004) and Somewhere Along the Highway (2006) albums, Antarktis manages to create a wholesale version of those albums, complete with monolithic guitar riffs and soft dynamics. It’s nearly a carbon-copy, but performed flawlessly. – David E. Gehlke (Antarktis Facebook) 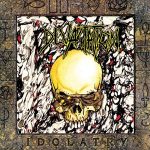 Devastation – Idolatry Reissue (Punishment 18 Records)
The third album from Texas thrashers Devastation also happened to be the tour in support of said record this scribe took in with Demolition Hammer as openers and Malevolent Creation as headliners – a potent triple bill for the early 90’s across North America. Caught in the burgeoning death quagmire that laid many thrash acts in cut-out bins, the eight main songs saw the band getting slightly more technical and long-winded in the instrumental sections. The riff/drum combinations and half-time groove sequences during “Freewill” hit all the Sepultura sweet spots of the time (Scott Burns as producer doubling the effect), but little else elevates this release against stronger bands in their genre. Tacking on live material enhances the deal, just in more of a rough and raw form. More of a document for the ‘worship all thrash’ faction than newcomers. – Matt Coe (Devastation on Facebook) 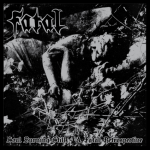 Fatal – Soul Burning Still – A Fatal Retrospective (Hammeheart)
Yet another band being unearthed who never quite their just due when they were active, Michigan’s Fatal played back then, to what amounted to an on-the-cutting edge brand of death/thrash. Overlooked by the bigger labels of the time, the band was left to release a handful of demos and EPs either on their own or on Thrash Records. Hammerheart Records has saw fit to compile a compilation (duh) of their old works, bringing to light the band’s spirited and undeniably-tight brand of underground metal. There’s always a buyer-beware with these sort of things, but Soul Burning Still – A Fatal Retrospective is worth your time. (David E. Gehlke) (Hammerheart official site) 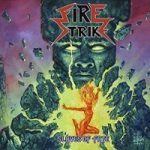 Fire Strike – Slaves of Fate (Stormspell Records)
Active under different monikers since 2004, Brazilian quintet Fire Strike release their debut full-length armed to assault your senses with traditional heavy metal. Dual guitar antics plus a steady, pounding rhythm section already piques Maiden/Accept-oriented patrons, but add in the comfortable multi-octave melodies from Aline and you can see songs such as “Reach For Your Life” and “Streets of Fire” rearing back to classic Warlock days. Additional French language drama narrative opens another highlight “Master of the Seas” – the bass underpinning and twin harmony plus soaring vocals quintessential to the heart of the genre. Slaves of Fate blazes with 80’s glory, iron steel for young and old to scream along and head bang in tandem to. – Matt Coe (Fire Strike on Facebook) 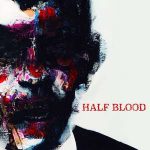 Half Blood – Half Blood (Self-Released)
Chilean modern metallers Half Blood hit the groove button heavy and often. Taking influences in such as Sepultura, Gojira, and even Slipknot and Tool, they seemingly hit many different angles over the course of their self-titled debut. They can go from some more melodic stuff (“The Choice”) to all-out aggression (“Self Exile”) on the drop of a hat. One can make the quick assumption that the heavier material is more compelling, and it does tend to be. Blistering, thrashy tempos allow the grooves to sink in the best. Some of the more melodic stuff, implemented into songs like “Release” only seem to serve the function of slowing things down. It’s not that it doesn’t work, but sometimes its better to let a steamroller just be a steamroller. – Kyle McGinn (Half Blood official website) 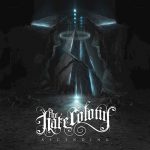 The Hate Colony – Ascending (Mighty Music)
“Norwegian metalcore.” Never thought the day would come, but alas, it’s here in the form of The Hate Colony. Hailing from Trondheim, it’s awfully difficult to fathom a band from such an area nicking their influences from American ‘core, but hey, to each his own. Not surprisingly, Ascending is brick-walled, stocked with those played-out, jump-da-fuck-up “bounce riffs” that typically draw the ire of the traditional, un-trendy metal crowd. A tough go all the way around. Good for The Hate Colony breaking away from their home country’s long-standing BM spell, though. – David E. Gehlke (The Hate Colony Facebook) 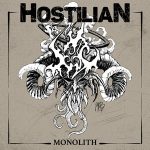 Hostilian – Monollith (Self-Released)
We gave this one a song premiere at the end of August, but everything written then about “Survive” stands true for the rest of the remaining three tracks on Monolith. Heavy, massive grooves are sure to pummel anyone in the immediate vicinity when this one is playing, while the songwriting craftsmanship and stellar leadwork will keep this one interesting far beyond the usual ‘groove-based’ acts. The EP approach works here as a solid introduction to a band that many should enjoy on the modern side of things, even if it does feel like it ends way too quickly. – Kyle McGinn (Hostilian on Facebook)

Lascar – Saudade (A Sad Sadness Song)
Chilean depressive black metal outfit Lascar (rhymes with “Nascar”) sure can turn ‘em around fast, somewhat like the band they pale in comparison to, An Autumn for Crippled Children. Whereas AAFCC writes methodical, gorgeous, lush and breathtaking songs, Lascar haven’t quite figured out how to make their band of post-black metal work. On Saudade, the band is somewhat hampered by a drum machine, not to mention poor vocal placement and stalled melodies. While the melodic spurts that comprise of “Thin Air” heighten the mood a bit, Lascar is ultimately done in by songs without much traction, or drama. – David E. Gehlke (Lascar Bandcamp) 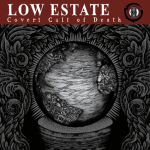 Low Estate – Covert Cult of Death (The Flenser)
Just about, but not quite, or possibly so depending on who is queried, a super-group, Low Estate rounds up Red Sparowes, Sannhet, Orchid and The Year Is One members for a black metal-on-sludge offering. Obviously, there’s quite a bit of harshness to go around here, even as Publicist U.K. crooner Zachery Lipez pops up on “Day of Days.” Heck, even Integrity lead throat Dwid Hellion makes an appearance, making Covert Cult of Death a firebrand, relatively captivating listen that blends disparate worlds into one giant, nuclear maelstrom. – David E. Gehlke (Low Estate Bandcamp) 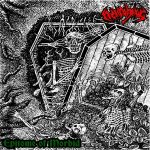 Nekrohowl – Epitome of Morbid (Slaugherhouse Records)
After a real dragger of a 3-minute “mood-setting” introduction (read: unnecessary) in the form of “Summoning Darkness,” Nekrohowl starts to really unleash some chaos for the remainder of their EP. Not exactly old school material, but certainly some influences from it (not of the Swedish variety but rather ’90s US brutality akin to Suffocation and Morbid Angel), Nekrohowl aren’t really re-inventing the wheel, but nor should they have to. They deliver energetic and methodical death metal that revels in solid songwriting over tech wankery and sheer old school mud, and there’s absolutely nothing wrong with that approach. Ripping and brutal stuff. – Kyle McGinn (Nekrohowl on Facebook) 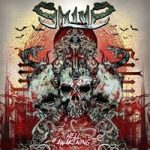 Silius – Hell Awakening (Massacre Records)
Proving their thrash value through local battle wins in Austria to play at Wacken as well as open for Arch Enemy and Biohazard, Silius penetrate minds and bodies through this debut full-length. A crushing guitar attack, relentless tempos, and gang vocals keep “Immortalize” and “Sick and Tired” bursting with fiery mid-tempo rhythms and smart transitions. Add in the blood curdling Phil Anselmo meets Morgana Lefay-edge to singer Matthias Thurner in his screams and melodies and it’s easy to see how this would go down a storm for those into Exodus or Low-period Testament. Original – not really (although the morose “Tool of Destruction” give off a somber dynamic)…but the execution and confidence override that aspect, which should go down a storm with those who live for this genre. – Matt Coe (Silius on Facebook) 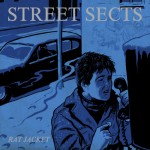 Street Sects – Rat Jacket (The Flenser)
Comprised of Leo Ashline and multi-instrumentalist Shaun Ringsmuth, Street Sects hover around that hyper-futuristic orb where samples lead the way and essentially, shape the music. Released by leading experimental extreme metal label The Flenser (hence, our coverage), the 12-inch Rat Jacket clocks in with four songs of trippy, albeit hyper and jerky slabs of drum-and-bass music. There’s a palpable edge to cuts like “Blacken the Other Eye” and frenzied “Total Immunity,” showing the future of music is here sooner than we think. – David E. Gehlke (Street Sects Bandcamp) 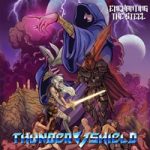 Thundershield- Enchanting the Steel (Self-Released)
Hailing from Georgia, Thundershield return a year beyond their last effort with a six-track follow up Enchanting the Steel EP. Subscribing to majestic vocals, tales of fantasy, warriors, and unicorns (“The Last Unicorn” evidence of that) plus riffing and tempos that straddle old NWOBHM bravado and European power metal bombast, it’s easy to imagine the beer flow and epic unison call to arms choruses going down a storm in the right live setting. A little sloppy in spots (the sliding runs for the acoustic guitar parts that open “The Last Unicorn”), the mountain-side melodies from Mikel Hutchings and twin axe action elevate “Nevermore” and apt finisher “Punch the Sun” into metal hearts globally. – Matt Coe (Thundershield on Facebook) 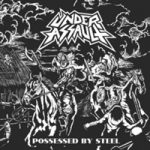 Under Assault – Possessed by Steel (Witches Brew)
Bringing it back to split releases, demo tapes, and pure underground ferocity, we have Under Assault from Paraguay with their latest 7” single Possessed by Steel. It’s raw, relentless, fueled with classic metal touches beyond the obvious thrash stance – the title cut and “Necrobutcher” deliver axe smashing, throat ripping songs the way early Cyclone, Destruction, and Sacrifice made an impact on the underground. Simplistic, shouted choruses and frantic, barbed-wire laced main vocals roar over the top of speedy guitar riffs, pounding bass and rugged thrash tempos. Active for six years, let’s hope these gentlemen get a second full-length on the landscape soon. – Matt Coe (Under Assault on Facebook) 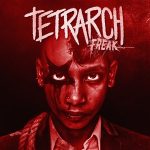 Tetrarch – Freak (Self-Released)
An interesting tactic by Tetrarch to combine nu metal influences (yes, bands like Korn and Linkin Park) and merge them with more metallic blood, ranging from acts like Trivium to Gojira to Metallica. It’s undeniably modern in tone, and while Dave Otero’s mix does give it a bit more ‘heavy’ to it, the nu-ish angles will undoubtedly be too much for those yearning for something more metallic in nature. The clean vocals are rather poppy in tone, owing much to KoRn/Linkin Park, and when combined with some bouncy riffing they are bound to give the metal veterans among us a slight cringe here and there. There’s no denying some of the potential in this, but this scribe would rather they revel in more chaotic moments (like some found in “Pull the Trigger”) rather than focusing more on the poppier aspects. – Kyle McGinn (Tetrarch on Facebook) 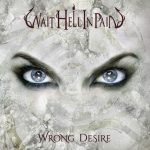 Wait Hell in Pain – Wrong Desire (Revalve Records)
Lots of ‘stock’ product in the female-led symphonic metal quadrant, and it takes some weeding sometimes to find something that sticks out. While Wait Hell in Pain aren’t quite there with Wrong Desire, they do have some points in the potential department as they move forward. For one thing, vocalist Kate ‘Hekate’ Sale has a more aggressive tone and isn’t as super sugary-sweet as many tend to be. The music is also more guitar-oriented and heavier (thus pairing well with Sale). Unfortunately, they seem to retreat into well-worn melodic territory at times. It’s not that they pull that part off badly, but it just ends up sounding like ‘more of the same.’ But if they embrace what makes them more unique next time, they have a ton of potential. – Kyle McGinn (Wait Hell in Pain on Facebook)