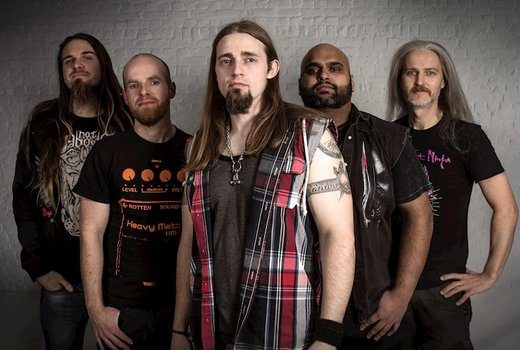 What kind of music do you think a band named screaming beast is going to play? One can make a pretty good bet that it’s going to be something on the heavier side of things. Once again proving the universal nature of metal in today’s age, the Manchester-based act take some distinctly southern (US) grooves and put them alongside some more modern metal and melodic offerings to give you a sound that’s both European and American.

The band’s debut full-length, Our New Narrative of Hate, is chock-full of rather catchy grooves and attitude. But it’s also got a ton of hooks, both musically and vocally, to take things one step further. It’s heavy, it’s aggressive, and it’s still retains a clear catchiness to it. Bottom line, it’s a fun album that you can crank and sing along with. The band was kind enough to respond to a round of questioning that details their debut, the struggles of a new band, and goals they’d like to achieve in the future.

Dead Rhetoric: To begin, could you go into the early days, and the movement from a two-piece to a full band?

Screaming Beast: This started as the project of Anton and Dan, and as more songs came together and sights for the live setting were set, Rory, Arun and eventually Jason was brought in to complete the unit. Having all known each other in various forms through the music scene of Manchester, this transition from “project” to “band” was pretty smooth.

Dead Rhetoric: Our New Narrative of Hate is your debut. What do you hope that people get out of it?

Screaming Beast: The same enjoyment listening to it that we had creating it!

It’s so important to us that our fans can connect to our music and lyrics and get a sense that they get what is going on with us and in some way we get them. The best music in the world is the one that you listen to and think this band gets what I am going through even if we have never met.

Dead Rhetoric: There’s a familiarity to Screaming Beast’s sound, yet it still feels fresh. What do you look at as the benchmarks of your approach?

Screaming Beast: I think it’s as simple as write music that makes you feel good and that we would like to hear. Stuff that we like, for us. Hopefully, that translates to the fans.

Everything we write we are happy to listen to. In fact, if any of us says this is not working for us then it probably will get a rework or put into the “to be looked at later folder”. We are music fans first and foremost and whilst we get that we will not be everyone’s brand of vodka we also know that what we produce makes us happy.

Dead Rhetoric: How do you feel that your two previous EPs helped you prepare for this first full-length?

Screaming Beast: Well, the songs from those EPs made it on to the album, so that’s some decent preparation! Although those songs and the new ones were given a “sonic update” for the full length. In a way, having the familiarity of those songs helped ease the process of putting the album together.

Dead Rhetoric: Likewise, what do you feel that you learned from this album that you’d like to apply moving forward?

Screaming Beast: The first album has been primarily written by Anton and Dan, with bits of input from the others. The songs that we have for the future are already a much more collaborative effort, with songs coming in from all members. Having been a group for a while now, we are gelling well and learning well how to work with each other – a process helped by our individual years of experience in music.

Dead Rhetoric: What’s most important when it comes to writing grooves into the music?

Screaming Beast: A good time! Literally, that is all it is, does the groove make you nod your head/tap your foot? Does it pique your interest? Does it generate emotion? This is the benchmark.

If you look at all the bands we dig they are all about the groove! The drums and bass set it out and then the guitars grind into that backbone allowing the space for Anton to weave his magic. Tried and tested formula that all metal bands follow and why mess with something that works.

Dead Rhetoric: Could you talk about the artwork of Our New Narrative of Hate?

Screaming Beast: For the first two EP’s we used an amazing artist called Niclas Mortensen at Monkey Mouth Art who set the tone and created the font for the band name. When it came to Our New Narrative of Hate we wanted to explore other, slightly darker, concepts and tuned to Andy Goddard at Crave Digital.

Andy put together an amazing concept which we all felt was the right direction as it had that eastern destroyer of worlds feel without being overtly evil. The front cover gives the sense of an ancient prophecy with the writing and the beast in the middle is somewhere between an eternal sage and a creature of chaos.

Our New Narrative of Hate as a title is not just the statement “we are going to talk about all the hate in the world” it’s also an observation that the world has turned on and tuned into a constant narrative of hate from our leaders and many of the media outlets. Maybe this is the prophecy contained in the writing?

Andy also created our new website and sculpted the theme for all our online activities and is working hard on some t-shirt designs which are just killer! They should be available on the website in the next couple of months so keep an eye out.

Dead Rhetoric: With Screaming Beast’s sound, it seems the live front is probably an exciting one. How would you describe the live experience for the band?

Screaming Beast: It’s almost transcendental! It’s very enjoyable indeed, we feel like we put on a great show, and the heads we see banging to our music would definitely indicate that this is the case! We all feel that if we bring the energy to the crowd they will feel it and enjoy the show even more and we love it when we get the crowd jumping.

Dead Rhetoric: As a newer band, what are some of the tougher challenges you’ve faced in getting Screaming Beast off the ground?

Screaming Beast: It’s tougher in general for new bands to get noticed, because there are so many, especially in the metal genre, and the quality is so high both in terms of musicianship and songwriting and we ask ourselves constantly how do we stand out, without doing something contrived?

There is no easy answer, you have to be on your game all the time pushing the music forward with social media, videos and live shows.

Although we have been a group for a couple of years, in relative terms we will only have the one album and two preceding EP’s to go off. So there is some more work to be done in terms of more music and more videos- but believe us when we say that is very much in progress!

Dead Rhetoric: What are some short and long-term goals that you’d like to see Screaming Beast achieve?

Screaming Beast: Short term goals: Touring behind Our New Narrative Of Hate, getting to play places outside of our hometown and even our home country.

Long-term goals: Continue making records, putting on bigger shows and garner a larger fan base a
Pretty much what any band hopes to do!

Dead Rhetoric: What type of emphasis does the band place on using social media to get your name out there?

Screaming Beast: Social media seems to be of utmost importance in the modern music industry, so where we can we embrace this as much as possible. There’s usually updates on our social media platforms at least once weekly if not more. Just to drop in on the fans and bring good musical tidings!

We also love interacting with our fans if they ask a question or just want to chat we are always willing to spend some time when we can.

Dead Rhetoric: What are your plans as we move further into 2018, outside of the album release?

Screaming Beast: We are shooting a couple of videos for a couple of the songs – “Despair” is already out, and available on our YouTube – so they will be released later in the year and hoping to get some more gigs and play this album to as many lovely folks as we can!

We are also writing new music for whatever will be our next release – we already have almost another album’s worth of material that is in the pre-production phase and will be recording it in late 2018 or early 2019.