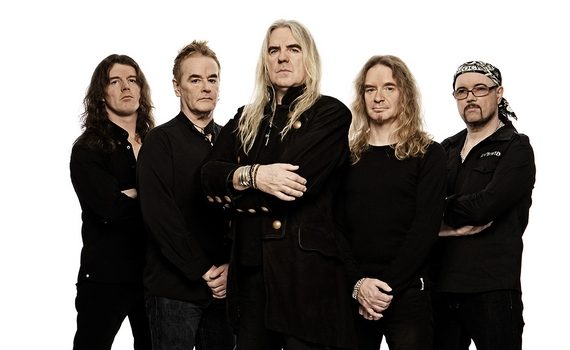 Active since 1978 as Saxon, this UK band show no signs of stopping on their metal crusade. Thunderbolt is the group’s 22nd studio record – and in the annals of the genre, there aren’t very many bands that can say they’ve reached that benchmark. What keeps the band relevant is their innate ability to trust the process, familiarize themselves with the advances of technology to surround themselves with reputable producers/management/label people to keep the train rolling, at this point leading to a third generation of followers. All the while cranking out solid songs that keep toes tapping, hands clapping, and choruses ringing out to audiences in small theaters to large, Wacken style headlining festival settings.

Prior to the band going on a significant North American tour with Judas Priest and Black Star Riders, we reached out to vocalist Biff Byford to fill us in on the new record, the importance of stunning cover art, if there are any plans to slow down/retire soon, and how he views the ever-evolving genre at hand given their five decades as a part of the scene.

Dead Rhetoric: Thunderbolt is Saxon’s 22nd studio album of your career. What factors do you believe contribute to the consistent and strong output of the band, especially this deep into the discography?

Biff Byford: I don’t know really. I’m very happy with the way the band is going at the moment. I have a great working relationship with the boys. It allows me to arrange things and write lyrics, and I can pick from a great selection of different guitar riffs. That’s how we do it- the boys will send me guitar riffs and ideas and I’ll put it all together, fiddle around with the arrangements and get some inspiration going.

Dead Rhetoric: Do you know as songwriters when things are going to work or when you need to change things up a bit to get the creative juices flowing?

Byford: I work with Nibbs (Carter) quite a lot, the bass player – he’s a great guitarist and a drummer too. So I work with him a lot in the initial stages of writing. I’m sending him ideas for my vocals and he’ll fiddle around with them on Pro Tools – we may have done or week or two weeks’ worth of material like that before we take these songs to the other boys in the band to let them have a go at fiddling around with their arrangements.

Dead Rhetoric: For instance, what came easiest to the band for the new record, and what needed to be fleshed out or worked on a bit more?

Byford: I think they all have to be worked out a little bit. It’s a process of elimination really. I do all of the arranging, and Andy (Sneap) and myself will also do some last-minute arranging. At the initial stages if I have an idea, like for “The Secret of Flight” for instance, I think of the chorus melody first, and then the chorus gets written around it. But for the verse, you look at the guitar riffs that Nibbs came up with, and we work together. It’s trial and error, you end up writing a lot of things that end up going nowhere. We treat every song as a separate project, and we don’t write one big song and everything else is like on the backburner. We treat every song as if it’s the most important song on the album, that’s how we work.

Dead Rhetoric: Your artwork has always been important, especially through pieces like Crusader, Rock the Nations, and Unleash the Beast. Can you talk about the relationship and specialness of Paul Raymond Gregory to Saxon – and where your views are on the importance of strong covers for heavy metal?

Byford: Paul’s first album was Crusader– and that’s a powerful album cover. It was voted one of the greatest covers in a metal magazine a few years ago. I have a great rapport with Paul, and I can tell him my ideas and he gets it most of the time. Thunderbolt was his idea- I sent him a demo of the song and a basic outline of what it was all about, the Greek mythology. He came up with the idea of the eagle with the thunder and lightning bolt, as Zeus’ symbol.

The paintings that he does are huge oil paintings on canvas- so all the artwork he does for us is actually a painting, three feet by three feet, or in the case of Crusader, it’s six feet by three feet. They are all big canvases, and it’s all down to the look of the painting. It has to connect with the title of the album, and in that respect, Paul is really good. We’ve used him for a majority of our albums since then.

Dead Rhetoric: You’ll be touring with Judas Priest and Black Star Riders across North America soon. How does it feel to gain this opportunity to play for arena audiences again like you did in the 1980’s here – are you hopefully to hit multiple generations of fans, even with this being more of an older band package?

Byford: I suppose we were out with Judas Priest and Motörhead in 2015 for a few shows in North America – we’ve done fairly good gigs with them. But there’s nothing like having a fantastic package together for the fans. You have to remember that when it comes to Saxon, the fans are the most important thing to us especially when we are touring. We just feel that this package- especially Judas Priest and Saxon- is iconic. The first tour we ever did in Europe was with Judas Priest in 1980- so we’ve been friends with them ever since. The three bands are a great bill for the fans to see, the people seem really excited about the new album and about the tour, so we are looking forward to it.

Dead Rhetoric: Where do you see the major differences in the development of metal from the 70’s, 80’s, and 90’s to the current scene? Do you enjoy the variety and versatility?

Byford: (laughs) The sub-genre thing split off quite early. Once the sort of grunge explosion had settled down, bands decided to split into the nu-metal thing. I still think a lot of those bands like Slipknot, Linkin Park, Pantera, a lot of those bands were still huge fans of the 1980’s anyway, the British bands like Saxon, Iron Maiden, and Motörhead. Some of the harder cult metal is a bit out there- if people like it, there will be an audience.

Dead Rhetoric: Do younger bands ever hit you up for advice when on tour or from the festival circuit, and if so what sort of words of wisdom or topics do you have them consider or think about?

Byford: Younger bands are always looking for advice, but the only advice that we can give them is to be as unique as possible and don’t surrender. That’s the only advice you can give to young bands because there are so many younger bands that are copying the older bands- I don’t think the young audiences want that, they want something of their own. Everybody is waiting for the new breed of rock, or the next wave if you know what I mean.

Dead Rhetoric: Has your definition of success changed from the start of the band to now?

Byford: (laughs). No, I don’t think so. My idea of success is, can we still make great albums? Yes. Can we still pull it off live? Yes, check we can. To me that is success enough. It’s really not about money – it’s about the way you interact with the crowd and with your fans. It’s very fulfilling, and I think that’s a great thing.

Dead Rhetoric: Do you get as equal a charge working on material in the studio as you do taking it to the stage and performing live?

Byford: I think you can get a good buzz from doing a good vocal or writing a great track. It’s not the same adrenaline rush like it is live, but you can still get a good feeling putting together a great song, the way it comes together. Like “Predator” on the new album, I asked Johan (Hegg) to do the low voice and when we were waiting for it to come back, we were blown away. It makes the album a bit special, you know?

Dead Rhetoric: How much of a challenge is it to put together a set list given twenty-two studio albums to pick from?

Byford: It was always a challenge, even from our third album. We are never going to win that battle, it’s unwinnable. Because our audience is very wide, young and old and everything in between. There will be people specifically in America that will be getting into Saxon on this album- we have been doing a lot of press and it’s been getting a lot of great reviews, the video is being watched a lot over there. These fans can now go backwards through the catalog, so it’s a great thing.

Dead Rhetoric: Plus you have long-timers like myself who have been into you since The Power and the Glory period…

Byford: We have people that have been into us since 1979-1980. We have to play some of the big hits- “Power and the Glory”, as a lot of people saw us in the US on that tour with Iron Maiden, and the tour after that with “Crusader”. Different audiences have their favorite song. I think the internet has made things much wider now. “Denim and Leather” is quite a big song now, a lot of people knew that song but didn’t necessarily know who played it all along.

Dead Rhetoric: Have there been any countries that Saxon hasn’t been able to play in that you would love to?

Byford: Not really, we’ve been most place. We’ve not been to China, we’ll see how that goes as they might not like us down there. We haven’t been to India, and New Zealand- so there are three countries that we could go to.

Dead Rhetoric: Does retirement or slowing down ever enter the picture for Saxon – or do you imagine doing this possible for another decade if possible?

Byford: I don’t know think we’ve slowed down- if anything I think we’ve sped up. The Saxon ship doesn’t have any brakes, we are just going for it, really. (laughs). Having a good time- we aren’t thinking about retirement yet, no.

Dead Rhetoric: How do you see the rest of 2018 shaping up for Saxon?

Byford: We will play to a lot of people in America. We will come back to Europe to do the festival circuit- and then we will do another headlining run of Europe in September. We might come back to the states again and do some headlining shows, we’ll see.