Dead Rhetoric: What excites you within metal music these days – do you believe there are more innovations or surprises on the horizon to keep the movement fresh and alive?

Paeth: Not necessarily more surprises like there used to be. There are always bands that have new ideas. I have a little bit of a feeling that stuff got a little too like a blueprint. It was never as easy as it is now to copy everyone, including the sound because everyone is using the technical stuff that wasn’t available before. They buy presets from this band, drums for this one, and a lot of stuff sounds alike. We need bands that have their own character, charisma. Not necessarily more now than there used to be. There are so many more releases now. It’s much easier to make an album, and much cheaper – so there are many more people that put out albums. It’s hard to stick out of the masses, or be covered up by the masses of stuff that is not special. The really cool stuff is drowning in the masses of releases. It’s hard to see through the jungle of productions and releases – it used to be easier to find the pearls.

Dead Rhetoric: Do you believe the consumers don’t spend as much time absorbing releases because of the fact that there are so many records coming out week after week?

Paeth: I think so. I have to include myself in that, if I’m honest. The way you listen to music also changed. I don’t want to exclude myself. You open Apple Music, and if you have a subscription then you can listen to almost everything you want to instantly. You don’t go to a record store like you used to, and the clerk knows you want the new Journey album – he plays it for you, you listen and you are so happy. He holds the vinyl, takes it home, and listens to it over and over until he needs a new one. He loves it so much that he has a relationship with the product. It’s not like this as much anymore. Times are changing. People don’t celebrate albums anymore. I have a feeling it was different back in the day because you couldn’t copy albums as quickly – you didn’t have access to the product as quickly. You would explore the stuff that you owned a little bit more and a little bit closer. Some people in heavy metal, we are the scene that is actually lucky to have some fans that still do this. It’s getting smaller though in our community.

Dead Rhetoric: How do you like to spend your free time as far as hobbies, interests, and activities away from music when you have the free time to do so?

Paeth: Until a couple of years ago, I made the mistake in my life that I didn’t have any hobbies outside of music. I was always working on music, and music was also my hobby. And then I noticed that I didn’t like it anymore – it was too much, working all the time. You can lose the love for this – don’t worry, I have it back now, and have for a while. It’s just like I didn’t have anything else outside of family. I thought I had to get myself a hobby – and I always liked old motorcycles because my uncle had them always. I came to his garage, saw this old motorcycle and thought I wanted one of those and learn to repair it. I didn’t even have a license, but I bought myself a motorcycle. I would do this a little bit, working on old motorcycles, in between doing a lot of music again. Every once in a while, if I get fed up, I will take a little ride or fix something, repair something and then I am happy. And we have a dog, that also makes me happy.

Dead Rhetoric: What would you say have been some of the pinnacle moments in your career – landmark releases or actions that you took where you knew you were making a significant impact on the music landscape with your work?

Paeth: Hmm, I never thought about going into the end of a production thinking, ‘wow what we created is going to make a significant impact’. But we’ve had moments where when we were done, thinking this is really special and hope people will really appreciate what they will get, because this is really different. It sounds strange, I think I can tell the difference. I worked for many albums thinking it was good, but it didn’t end up like that. One of the very first albums I worked on was Angra – Angels Cry, right after when this was done, I remember fighting for it in front of the Japanese record company. We got this fax, and I still have it somewhere, it was about their music and how we approached it. I called them back in the day because of my relationship with Heavens Gate- I will call JVC Victor and talk to them. We will take the full responsibility of what we’ve done with this album – just release it. And they did, and it went gold in Japan, so they were very happy. I was sure it was different and kind of a landmark. It was magic in a way and I could tell.

Not necessarily all my ‘landmarks’ were super successful. Sometimes it’s just a personal thing. One of the landmarks is Virgo, which I did with Andre Matos who unfortunately passed away a few months ago. We wanted to do something else, it was a musician’s vacation in a way. We had a good budget, we could book a cool string section, a big band, in a great studio, a gospel type of choir. I went to London for the mastering, and stuff like that. It is still something I’m proud of, and very different for me but still a landmark that was not super successful. It came out at a bad time because the first day of the promo trip was when 9/11 happened. It was disturbing, this world war three mood was there in the atmosphere. Also The Scarecrow was one of the landmarks, and Rhapsody as well. The first Rhapsody… maybe it’s not exactly what I love music-wise, but it is very special for what it is in a way. It was very successful, and the same goes for The Scarecrow. Rhapsody is 100% not my style, but the sense for melodies was great back in the day. The way it was approached was very special.

Dead Rhetoric: What’s on the agenda for Sascha Paeth over the next year in terms of music, producing, songwriting, etc. – and would you ever consider writing a book or doing a documentary regarding your activities in the music industry?

Paeth: You know what? We had this every second Thursday, we would meet in the studio with a couple of friends, a youth meeting but just older. Until five years ago, every Thursday evening, sit down, talk, have a beer and sometimes I would talk about stuff and they would say, ‘Sascha- you have to write a book about this’. It was hilarious stories. There are a lot of stories to tell. I don’t think I have the talent or the patience to write a book. I would need somebody to help me – actually I have somebody that played in my first band who would be the right guy, he remembers everything. I started to forget so many cool things, it can come back to me if somebody tells me a memory. I’ve had so many things happen over the past thirty-five years – it would be interesting, but I’m not planning it. I’m doing little documentaries here and there on my YouTube channel actually, to have fun with this. We invited some people to talk, little videos about little topics, answering questions that fans have.

The next show is Masters of Ceremony, the first show we are playing on the 17th of October. It’s a premiere, on my Spanish island. In the frame of a full metal holiday, the name of the event. We will play in a hotel, a festival inside of a hotel. We don’t have plans to play more this year with that, we have Avantasia shows in December. Around February we are talking of a tour with Masters of Ceremony, the possibility is there. We will see what is happening from there next year. 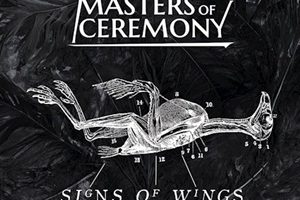