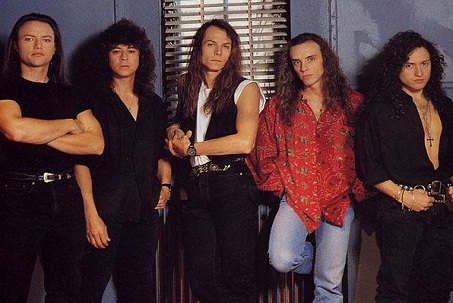 Tate: No, not really. It’s a lot of work. I don’t know if it would be beneficial to us. I suppose if there’s one record I’d like to re-do is the first one, The Warning, only because we never got to finish it. It was taken out of our hands by the record company and since we weren’t used to making records and were so young at the time, they said, “All right, you guys are done, you got to give it to someone to finish it up for you.” We learned a valuable lesson. From then on, we came in under budget and got the records done on time.

Blistering.com: Moving into the present, you did a run of cabaret shows. How did they turn out?

Tate: It was good, probably the most fun I’ve had at a Queensyche show…ever [laughs]. We like theatrics, we like to create an interesting show and I’m a big fan of cabaret and performance art. I’ve been pushing for that for a while with the band, and really, it had a life of its own. We weren’t planning on touring this year because we are making a record. We had done some in February, just because they were a fun thing to do. A friend of ours in the Seattle area who owns a theater called us up and asked if we had a special thing to do for Valentine’s Day, so we wrote it, put it all together, did two shows and thought we were done. But then we started getting calls from different promoters who had heard about the show and asked if we were interested in bringing it to their location. We figured, “Wow, if promoters are interested in bringing the show to where they’re at in this economy, we’re going.”

Blistering.com: How did you make your material work in that kind of setting?

Tate: Our material is pretty visual, so it was fun to put together the show. There’s a lot to it with the props and different lighting and you had all kinds of people onstage with you that you have to develop a rapport with them, just so they know to be in the right place at the right time [laughs].

Blistering.com: The new album, what’s the progress on it?

Tate: It’s good. We hope to have it wrapped up by the end of January, then release it in the Spring. We have a new record label that we signed to [the Loud And Proud imprint of Roadrunner]. We’re in a very creative state of mind.

Blistering.com: Direction-wise, where are you going?

Tate: That’s always a touchy subject [laughs]. Everybody hears things different and hears a song in their own way. For me, it’s a real departure in songwriting with this one. Eddie [Jackson, bass] and Scott [Rockenfield, drums], our rhythm section have written a lot of material on this album and there’s a lot of rhythm going on. It’s a very modern-sounding record because of that and we’re experimenting with how we’re playing guitar, trying to steer-clear of the whole “bonehead” metal guitar style of playing [makes “chumping” noise]. That’s kinda Neanderthal and not where we’re at. We’re playing the guitar in different ways, voicing it in new ways. If we’ve done that guitar style before, we’re backing away from it and trying something new.

Blistering.com: Doing vocals over this must be tricky then, right?

Tate: That’s the interesting thing too, when you have a lot of interesting rhythms to sing to, it inspires you to move in different directions vocally. That’s something I’ve been enjoying a lot with this record. I’ve been singing in different ways.

Blistering.com: Your career has become so diversified, yet at the core, Queensryche is still a metal band. Is there ever any inclination to go back to your roots and cater to your fanbase that no doubt, wants to hear more metal out of you?

Tate: Honestly, the way I feel about it, is that we define what metal is. We do. Bands that play music define what metal is, fans don’t. They just listen to it. I don’t mean that to sound arrogant, but that “box” that we call metal, it has a lot of parameters to it. It doesn’t have to be one way and there’s a lot of bands that play one way and that’s all they can do. What we like to do, is stretch out. We’re influenced by a lot of different types of music and if you were to look at each of our record collections, we have every record ever made. So much influence from different styles of music and time periods and we like to work those influences into what we do.

We try to take what people call “metal” and we take it and push the envelope on it, and redefine it. That’s our goal; not to do what we’ve done on the previous record or do what other bands are doing. The worst thing you could say to anyone in this band is, “Oh, so you guys are a metal band.” Or “You’re a rock band,” or “You’re a progressive metal band.” We’re not that – we’re Queensryche. We don’t want to be categorized in some little box and have to wear the outfit and be in that box.