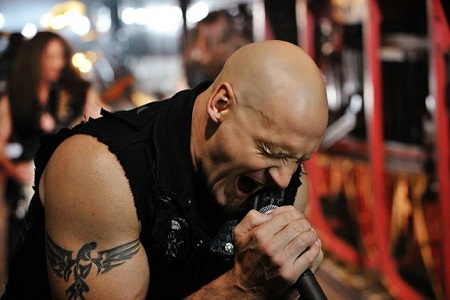 Blistering.com: What made “Bad Guys Wear Black” the choice to be lead single?

Scheepers: We were discussing it and were thinking about which song would be the best video. You always have to think about the time of the song if you have a six-minute track, you have to think about how much time it will take the shoot the video because as I told you, the music business is not as strong as it was 20 years ago. Record labels don’t have so much money to spend on video clips, so we have to think about money. In the end, we picked a strong a song and short song, somehow. It’s a perfect song for the video clip.

Blistering.com: Switching gears, a lot of German metal bands that hit around the 90’s are still doing well. What do you think is the reason you guys, and Blind Guardian, Gamma Ray, and Helloween are still out there?

Scheepers; I think it’s still the instinct from when we started. We are a rehearsal studio band. We aren’t the kids that record everything in their home studio, we also know how it is to rehearse our asses off for weeks and I think that allowed us to have a certain quality. Like I said, I’m recording my own vocals, but I don’t want to miss the time when we were learning, the years when I was 16 to 27 in Gamma Ray. You really learn a lot when you’re rehearsing and composing with a band, and rocking your ass off the rehearsal studio. If you can make it there, you can make it anywhere.

Blistering.com: What kind of things did you take away from being in Gamma Ray?

Scheepers: A lot. I was starting to tour all around the world, apart from America. I had to comfort to not record everything in two or three weeks – we were there for three months for the Heading For Tomorrow album. You always collect experience and learn a lot, which is the most important thing. I still think nothing will ever change that fact that I have respect for Kai [Hansen] and all the other musicians of Gamma Ray. We are great friends still. When we meet on the road, we have a good time. It was just time…maybe it wasn’t perfect anymore in the end. But two months later, we were sitting together and having a good time. And that’s why we got together to record Judas Priest’s “Exciter.” It was a certain strange feeling for me, going up there again where I was five years for almost every weekend [laughs]. It had to be….everything sorted out in the end.

Blistering.com: Everyone knows you were one of the finalists to land the Judas Priest gig in the mid-90’s. Any regrets with not getting it?

Scheepers:None at all. Everything is so long ago now.

Blistering.com: Hard to believe that was 15 or 16 years ago.

Scheepers: I know, but everyone is happy now, even Tim [Owens] is happy with what he’s doing. I don’t want to speak for Priest, but I’m happy to hear them with Rob again, and everyone is okay. Primal Fear was born, and that was a very good step and time in my life.

Blistering.com: If you think about it, you not getting the Priest gig led to Mat finding you and starting Primal Fear. Fate, wouldn’t you say?

Scheepers: I tell you, I was about to stop after Gamma Ray and not getting the Priest gig. The disappointment was really big back then. Then I spoke to Mat, and we’re coming back to the friend thing – he really helped me out of a black hole. We sat together and composed some songs, very free, without any pressure, sent the tape around, and all of the sudden, everyone wanted us and that was great.

Blistering.com: You’ve hit North America a few times, so are there any plans to try and come back?

Scheepers:Absolutely, we have to. We want to, we’d love to. It’s really hard, though. It’s pretty tough for a German band to come over there with a working visa since it’s so expensive. It’s a big, big deal, and a big thing to get there and play. It’s worth it. We experienced last year when we did a few weeks over there. Not every house was packed, but in the end, it was the right step to get our foot in the door. You have to play live and it’s a huge country. It takes you weeks, even months to get everywhere, and you have to be really strong and to stick together and be one unit. We always say in Europe, “You make in America without splitting up, you can make it anywhere.”