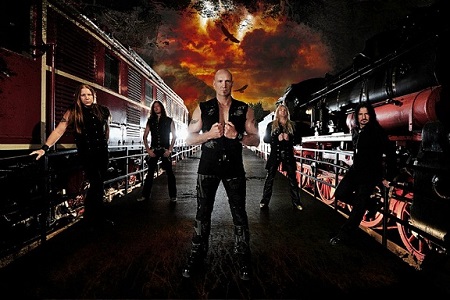 The story of Primal Fear is one of friendship, of all things. The combo of singer Ralf Scheepers and bassist Mat Sinner goes back to the mid-90’s, where a disillusioned Scheepers was ready to throw in the towel after missing the cut to replace Rob Halford in Judas Priest. Already having been ousted from Gamma Ray to make way for Kai Hansen’s return to the mic, Scheepers was contemplating a different career altogether until Sinner convinced the now bald-plated frontman to keep going, resulting in the formation of Primal Fear in 1998. Since then, the pair has weathered the storm of countless lineup changes, power metal backlash, an aborted North American tour in 2003, and the “Junior Judas Priest” tag that has followed them throughout their career. Clearly, this makes the title of their new album Unbreakable all the more fitting.

One knows what they’re always going to get with Primal Fear, which in this age of diluted and cheesy power metal, is a good thing. As workmanlike as the band has become, there’s no substitute for killer songs, something Unbreakable has in spades, so with that in mind, we were able to catch up with the affable Scheepers via telephone to discuss the band’s work ethic, the new album, his past with Priest, and what lies ahead for a band lovingly dubbed as “The German Metal Commando.” Take it away, Ralf…

Blistering.com: You guys are always so productive and it’s not like churning out subpar albums. Where does the work ethic and drive come from for Primal Fear?

Ralf Scheepers: Actually, we’re a good team. We have four writers: Mat, Magnus [Karlsson], Alex [Beyrodt], and me for this album and everybody has great ideas and we have a certain kind of “set” when composing a new album. We first sit together and talk about what we want to do and with this album, we wanted to get back to what we were doing on the first album, the Primal Fear self-titled album and Jaws of Death, and some energy parts from Nuclear Fire as well. So this was in our heads when we started to compose the album. We wanted to get back a little bit.

Blistering.com: That’s what I was thinking too upon my first couple of listens. Because you have established your sound and have had it for so long, does that make it easier to come up with material?

Scheepers: It definitely does. It comes absolutely natural; you don’t have to be pretending something, you just go ahead and do what you love to do and that’s what’s happening. If Mat or Magnus come up with a song and I put some lyrics to it, it’s like they already knew what I was going to do with it. Over the years we’ve grown together as a great writing team, and I think it shows.

Blistering.com: You and Mat have been with the band since the beginning, so has your dynamic grown even stronger over the years?

Scheepers: Being friends over the years and spending time together, plus having trust…that’s the most important thing. We’ve been through the thick and thin over the years and the bad things with the business and internal stuff, we’ve grown together even more. We have a responsibility…to ourselves, to the music we’re doing, and also the fanbase we have, and that’s what we still keep in mind, and keeps us going. That’s the reason why we called the album Unbreakable.

Blistering.com: That led into my next question – I think the album title is very fitting. For you, what does it encompass for Primal Fear?

Scheepers: It’s absolutely natural that sometimes, five people don’t stick together; you can’t say it’s forever. But sometimes it’s perfect, like when Mat and me are doing are thing. Like I said, it’s still great. If somebody in the past was unhappy, they could easily say the reason why he’s unhappy, but if that doesn’t happen, what can we do? We don’t want to force people to stay with us [laughs].

Blistering.com: The guitar tandem of Alex and Magnus seems to be firing on all cylinders, and I’m really impressed with some of the things they do on the album.

Scheepers: We always found out when we play live. Alex has been helping out the band since 1999, almost since the beginning with certain reasons like baby breaks, business breaks, and so forth, and he always jumped in and proved that not only does he love the band, he loves the guys. Last year, we were touring with him and Magnus on the road in South America and we had a great time. Alex is always somehow a guy that’s always positive and the two of them got great ways to play together. It absolutely fits and the chemistry is there and that’s just amazing. It was the indicator that the album is going to be great because the guitar team worked so great.

Blistering.com: I don’t think it’s a stretch to say that this one of your more guitar-oriented albums you’ve done in recent memory.

Scheepers: That was one our goals to have that, because Primal Fear in the end, is a guitar band. We experimented in the past with Seven Seals and a little bit on New Religion, and the last album 16:6 (Before the Devil Knows You’re Dead) had some experiments. We are the heavy metal guys; the guitars, drum pounding, vocal screaming band in the end.

Blistering.com: Your voice has held up remarkably well. If you put the new one up against Jaws of Death, you sound pretty much the same. Any secrets?

Scheepers: I’m trying to be healthy, it’s not always easy [laughs]. With trying to sleep, but always trying to enjoy my life [laughs]. I think that’s a major key for any singer. Since I’m working in my home studio, I’m very self-critical, I’m always repeating until I nailed it. I remember times when we worked together in the studio, they always said it’s “good, it’s good,” and I would go, “I don’t think so.” But they’d be “Keep it!” And being upstairs in my home studio, I don’t keep it; I just go for it until it’s perfect.