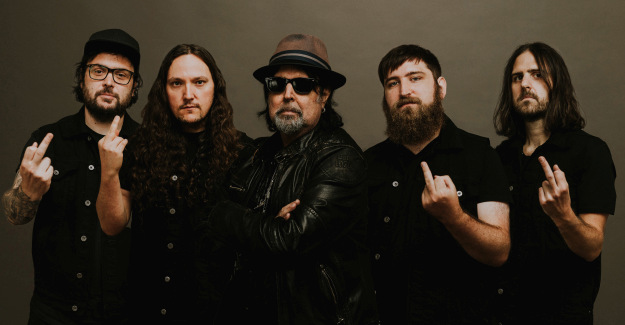 A unique father and sons set up, Phil Campbell (of Motorhead) and three of his sons (Todd, Dane, and Tyla) comprise this act, alongside vocalist Neil Starr. Playing some aggressive rock music that features plenty of energy behind it, as well as some offshoots into some blues and southern rock territory. Their upcoming second full length, We’re The Bastards takes the strengths of their debut and fleshes it all out even further. We took a few minutes to catch up with bassist Tyla Campbell to get his thoughts on the material, the role of bass, the band as a family, and more!

Dead Rhetoric: What can you say about the new album, We’re the Bastards?

Tyla Campbell: I think we’ve developed ourselves. It sounds a bit cliché, but we are a new-ish band even if we have all known each other for years since it’s my dad and two of my brothers. But as songwriters we hadn’t really written songs together before. So there’s a steady progression from the EP we released to The Age of Absurdity, and you can really see us in our element, finding ourselves a bit more, on this album.

Our first album we did some slight experiments, like “Dark Days” which was a slower and bluesy song. We didn’t know how it would go down since people might have been expecting a more aggressive Motorhead sound because of my dad. But it ended up being one of our most popular tracks. So we broadened our horizons a bit more this time with songs like “Desert Song” and “Born to Roam” which have a more southern rock vibe. I think we have found our sound a bit more and felt more accomplished as songwriters.

Dead Rhetoric: Is there anything that you are particularly proud of accomplishing this time?

Campbell: I think it was good that we wrote the songs before lockdown, and recorded them during lockdown. So the recording process was a bit different. We were 100% on social distancing, and there was only like 2 people in the studio. Usually the whole band is in there to give you feedback on different parts. So that was interesting. But if I had to say that one thing that I’m proud of, it’s the last song, “Waves.” It’s kind of a rock ballad in a way, but it’s a nice closing song. I think Neil [Starr]’s lyrics and vocal melodies are some of the best he has come up with. I can’t wait for people to hear the album.

Dead Rhetoric: There’s a lot of energy in the music – do you consider the live aspect when writing?

Campbell: I think maybe subconsciously. Sometimes we know when a song will go down well live. When we write a song, we know some things we can do with it live. For one of our songs from the first album, “Get on Your Knees,” we do that call and response with the crowd. We kind of imagined that when writing it and came up with that spot. So I don’t think it’s anything unnatural, we don’t sit around and think about ideas that will go well live. It’s a bit of just doing what will come across naturally.

Dead Rhetoric: What do you feel makes Phil Campbell & The Bastard Sons unique?

Campbell: There’s three generations in the band. you’ve got my dad, who was brought up on ‘60s and ‘70s music. Then you have Neil and Todd [Campbell], who were brought up in the grunge era and their favorite bands were Nirvana, Pearl Jam, and Soundgarden back then. Dane and I were brought up with nu metal, but I also listened to a lot of other music, so I think that we bring a lot of different inspirations. There’s this melting pot of different ideas. I think that’s how our music comes across. The final product is because of our different influences.

Dead Rhetoric: Could you talk about the band as a family – being in a band with your father and brothers.

Campbell: I’m not sure that it makes that much difference from any other bands. Being in a band is like being in a family anyway. You are always going to have arguments and disagreements regardless of if you are a family or not. We usually have the odd disagreement out on the road, usually something stupid like the set list or something not being on the rider – it’s always pointless and stupid. But you always hug and make up in the end and have a beer. So it’s not too different. We are a family, but a band’s a family anyway.

Dead Rhetoric: Given your father’s musical path, do you feel it was inevitable that you and your brothers would do the same?

Campbell: That was always the idea, whether or not we could do it professionally was another question. We have all been in bands over the years. When you are 17 or 18 you get an idea of starting a band and making it. We had all done really well. My other band, The People The Poet, we have done tours over the UK and gotten lots of radio. But none of us have ever gotten to the next level – getting big or making a living off of it. There’s so many bands that it’s hard to do. We are really lucky at the moment, even if we can’t play concerts or tours.

But with The Bastard Sons as we are, we are very fortunate to be able to make a living off making music. Before this band, I was in a screen-printing studio for five years and I worked in a shop for another five years too. When we were younger it was good to be on that path towards rock music, and when we were younger everyone else was listening to other things, like Spice Girls or N’Sync. I was wearing my Metallica shirt wondering what the hell that was. We are glad our dad brought us up the right way.

Dead Rhetoric: Yeah, that seems to happen with the heavier side of music – getting tossed to the side a bit in favor of whatever is trending at the moment.

Campbell: I’ll tell you one thing that changed it was when nu metal came in. Some people may not like it, and I can’t say that I listen to it now, but I loved it back then. It got a number of my fellow friends who would buy Robbie Williams or Poison – for some reason a band like Limp Bizkit got regular people into rock music. That’s what I felt in my school environment – those people listening to the pop/punk culture. Even if you don’t agree or like them, they caused a lot of people to like rock music. Which may have gotten them to listen like classic bands like AC/DC or Led Zeppelin. It made them less embarrassed to listen to their dad’s record collection.

Dead Rhetoric: What are your thoughts on bass playing and the role in the music?

Campbell: I think it’s a bit underappreciated. But if you are in a group of friends who know little about music, they always say, ‘turn the bass up in the car stereo.’ Our drummer used to do that – he would ask why the bass was so loud. People love hearing that thump. If you watch a band and you took the bass out, it would sound weird to me. I know there are a lot of two-piece bands, like White Stripes or The Black Keys, but I just can’t get into two piece bands. It just needs a bass. Put a bass in and I’m all for it! I’m a guitarist by trade, as I started out playing guitar but I am enjoying my role playing bass at the moment. It’s a nice change. It’s also two less strings to change. I hate restringing guitars. I think a lot of non-musicians don’t appreciate the bass but if you take the bass out of the music, it wouldn’t sound right to me.

Dead Rhetoric: What’s tough about releasing a new album during COVID – what impacts has the pandemic had on the band?

Campbell: The main thing is that we can’t go out and tour in support of the album. We were supposed to go on a headline UK tour in November. When we realized that wasn’t going to happen, there was a small conversation about delaying the album. But we all thought that at least if fans couldn’t get to a show, we could give them new music so that they have something to look forward to.

Dead Rhetoric: What would you like to see from rock and roll music in 2020?

Campbell: I’d like to see a concert [laughs]! Unfortunately, that can’t happen. There are a few social distanced concerts and gigs, but most of the venues I know of can’t do that, financially. That’s my honest answer really. Go to a concert, rock out, buy some merch and have a few beers. Get some late night curry and get the last train home. Unfortunately, it hasn’t happened for about seven months or so and I can’t see it happening for the rest of the year. Maybe not until next summer, who knows? We’ve got to stay positive that next year will be better for everyone.

Dead Rhetoric: Being in this situation, do you have any plans for 2021?

Campbell: We rescheduled all of our shows from this year to next year. We have a German headlining tour for April. We have booked it in case things go back to normal and there’s a vaccine. We might have to reschedule it for the following year. But basically, we have rescheduled all of our tours until next year. I’d imagine that if there’s no shows or tours for the first part of next year, we’ll write another album I think. I don’t see a reason not to. Fingers crossed, if everything is great, we will have a new album and some tours. Hopefully that will be the case. I miss playing shows, but I miss going to shows as well.