Paradise Lost – The World Made Flesh 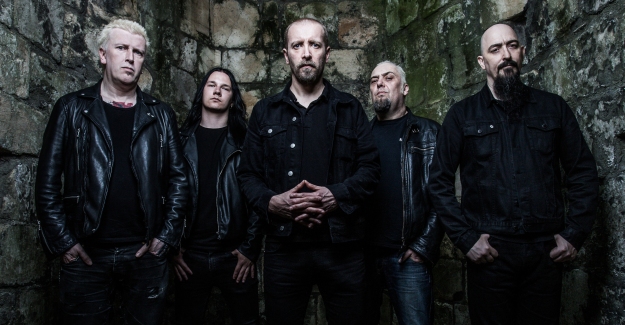 Practical inventors of the U.K. gothic doom sound, Paradise Lost aren’t exactly ones to gather in a circle and listen to their old creations for inspiration. Rather, it’s in their DNA, a strain that has undergone more mutations than we can properly list. It’s the explanation for the fact that no two PL albums sound the same. The band was, and is, ever-morphing, feet planted on the ground “in the now,” while retaining their identifiable sound, which is largely defined by the songwriting team of vocalist Nick Holmes and lead guitarist Greg Mackintosh. And if the band decided to pop out another electronic-infused album, would anyone be surprised?

Circa 2017, though, it’s all monumental doom by way of their 15th studio album, Medusa. Comprising of eight bristling, riff-intensive numbers, the album finds PL digging through the fertile soil of their ’90s doom era, in particular, the underrated Shades of God album. But while that album occasionally gets lost amid the piles of riff and tempo changes, Medusa’s unwavering maturity and focus brings it all together into one bleak package. Proving that northern misery is still alive and well, we snagged Mr. Holmes for an interview. Here’s how it went…

Dead Rhetoric: It has been mentioned by you and Greg that Medusa resembles the Shades of God album. Did you go back and listen to that album prior to recording Medusa?

Nick Holmes: No. I think it’s more of the essence of the album, maybe. It’s probably the most riffy album we’ve done. The thing of that album is that was always about welding riffs together. It wasn’t about trying to do slick song structures, it was about this old-school [approach] trying to weld riffs together. I think there’s more structure on this album, for sure. Like I said, it’s more riffy, I think. We never really go back and listen…I only listen to the old albums when I have to rehearse them.

Dead Rhetoric: Shades of God can be seen as your first transitory album. It was like an entirely new thing.

Holmes: It’s a really, really heavy album. It’s one of my favorites because it’s a very different album for us – no other album sounds like it. The singing style is different because I was using a new type of voice, partly because it killed me. It was a transitional period, I guess. We were going toward a more songwriting element. Icon was probably a lot more commercial with that regard. It’s more of an in-between album. It’s not a very well-known album; it’s not one of our top-selling albums. Yeah, I think it falls by the wayside a lot. It’s a strong album from a metal perspective.

Dead Rhetoric: You brought up the change in singing styles. As a vocalist, was it difficult to go from a guy who was grunting in key to what was found on Shades of God?

Holmes: The growling thing is okay, but when you try the growling and singing, the in-between, it rips your throat out. It’s incredibly physical as well. That’s why I stopped doing it on Icon. I thought if I wasn’t going to growl anymore, I’d better try this thing as it were. The in-between growl and singing was too hard; I couldn’t maintain. It’s not natural to do that. There’s technique to growling, but the idea on that album just killed [it]. I could sort of get there. I think we did a little bit on Gothic. I could do it on request for a song or two, but that’s enough.

Dead Rhetoric: Did the positive reception to The Plague Within play into the creation of Medusa?

Holmes: I think it was the song “Beneath Broken Earth,” really. That came together quite fast and it was a very natural way of writing. It reminded us very much of how we used to write songs when we were younger. I guess that was the kind of springboard, like okay, “Let’s do more of this.” Even with the death metal vocals, I try every singing style on every single song, but ultimately, the death metal style sounds the best over those riffs. You could try clean singing over these riffs, but it doesn’t sound right, it doesn’t have the same impact. The vocals are another instrument to me, especially the growled voice. Everything has to complement each other, so that’s why the vocals are particularly gruff on the new album.

Dead Rhetoric: I have in my notes that you use your entire array of voices on the new album.

Holmes: Yeah, I was singing in every voice. But I mean, in the past, if there’s been a really massive riff and you sing over it and you put more voice into it, it just loses impact. It’s not as good. That’s me speaking as a fan of old-school death metal. It’s got to hit the mark. I don’t want to say “Okay, I don’t do the death metal voice anymore.” We’ve done it a lot over the last couple of years. It’s whatever sounds right with the riff.

Dead Rhetoric: Does playing in this “old style” make you feel nostalgic?

Holmes: I don’t really get nostalgic about our band, even the music we’ve done. Every album represents where we were at that time. When I look at pictures of us when we were kids and we were starting out…I get nostalgic talking about other bands. I was chatting the other day with [drummer] Nick Barker [ex-Cradle of Filth, Dimmu Borgir] and a few of the guys from Memoriam and we were talking about the old tape trading and the bands we liked, like [Possessed’s] Seven Churches, that makes me nostalgic. Those were the best days of our lives. That’s when we were starting, but I never feel like that about the band. It’s a continuing thing. If I stopped doing it, then we’d have retrospective and could look back, but we’re still doing it, we can’t think about it like that.

Dead Rhetoric: Do you think you have the drummer situation solved now that you have Walteri (Väyrynen)?

Holmes: It’s been okay with the last few drummers, but they both were in the band for six years, which is a long time to be in a band. For a couple of reasons, Jeff Singer left because he started a large family very quickly. He had to be at home and get a proper job for that. Adrian [Erlandsson] found himself incredibly busy with his various bands and it was crossing into PL and he was struggling to do everything at once. They both left for pretty good reasons. It’s not like they’re assholes. [Laughs] We’re all friends. So far, Walteri has been working out great. The thing is with metal and being a musician, especially with metal, you get older and you have children and the money is crap in this business. You spend a lot of time away from home because you’re always on the road. You have to balance between money and enjoyment. It’s a tough business. It’s getting harder now than never. You have to work harder to make more and if you have kids, it’s a toxic picture.

Dead Rhetoric: Was there much of an adjustment period playing with Walteri?

Holmes: No, he’s like a new, very modern drummer. He’s into a whole host of bands that have influenced him, coming up from these amazing black metal drummers and classic drummers we grew up listening to. He’s got a real wide range of styles he can turn off and on whenever he wants. The level of playing now from when we started in the late ’80s, it’s like a different league. The things drummers can do is insane compared to what they could do back then. He can handle it. He can do blast-beats, he can do slow. A lot of fast drummers can’t do slow, but he can do that as well. He’s very talented; he’s only 23. He’s got a glittering career ahead of him.

Dead Rhetoric: Your re-recording of “Sell it to the World” is great. It’s one of the better songs off Believe in Nothing. Is there any sort of trepidation in re-recording a song for a heavier audience?

Holmes: It was re-recorded, so there’s only so far you can go. I could re-sing it or Greg could use a different pedal on his guitar. It can only get so much heavier. That album is a flat-sounding album. That’s probably the only album we weren’t one hundred percent happy with. We thought it sounds flat. We liked a lot of the songs, but it didn’t have the sound we wanted. But yeah, [producer] Gomez [Arellano] has brought it back to life. He’s doing a great job with it.

Dead Rhetoric: What made you pull that one out? Was anything from Host given consideration?

Holmes: We were looking at Host, but we couldn’t find the master tapes.

Dead Rhetoric: Would EMI still have them?

Holmes: I thought we had them, but we can’t find them. Yeah, it’s a shame because out of that period, that’s the album I would most like to re-do. I would be interested in re-recording some elements of it and completely re-doing it. It probably won’t happen because we got a new album out and we’ll be busy with that. I always think in hindsight that’s the one I’d like to re-do and work in a modern context, but it probably won’t happen.

Dead Rhetoric: Sonically, Host is not a heavy album, but it has an atmosphere and approach that could translate to how a metal band would operate.

Holmes: Yeah, there are some songs you could do that with. I like a lot of it, even with the soft singing, you have to be careful with that. It is what it is. I really like that album. Regardless of whatever has been said or whatever. I still think it’s a really strong album, some of our best songs are on it. It was very much of the time. There were a lot of things around that…it’s just as well Facebook wasn’t around at that time. The negativity that would have gone down…

Dead Rhetoric: Just think if it was around when you were going from Draconian Times to One Second, especially with the haircuts and all.

Holmes: It would have been insane. [Laughs] That would be so fascinating to be able to have read what people were actually thinking.