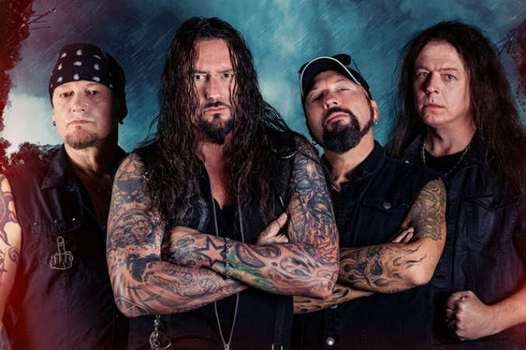 Professional musicians in the modern era place no limitations on their creative output. It’s all a matter of hard work and time management to accomplish more than ever, especially given the studio technology available at everyone’s affordable fingertips. Bassist/vocalist Schmier of thrash mainstays Destruction originally developed the German Pänzer to fuel his old school desires, to reach back into his early NWOBHM listening days and develop a band that put forth traditional metal to the people. Friends in guitarist Herman Frank and drummer Stefan Schwarzmann rounded out the lineup, issuing a promising debut in 2014 with Send Them All to Hell.

Changes have been afoot in the three years between records – Herman stepping away to work harder on his solo career after leaving Accept, necessitating a reconstruction as a pillar in the songwriting ethics of the band beyond his premiere playing abilities. Enter two guitarists with V.O. Pulver and Hammerfall axe man Pontus Norgren, plus a shortening of the name to Pänzer and we receive their latest record Fatal Command. Pushing the twin guitar elements to the max, this effort will make people don the denim and leather, bust out the bullet belts, and raise a toast to all that is right for the almighty steel.

Shortly before the release of the record, we set up a Skype chat with Schmier – who after a brief internet connectivity issue in his German homeland was able to get things squared away for this talk. You’ll learn more about the man’s shoulder surgery following his wire-tripping on the Summer Breeze festival fairgrounds and follow up recovery, why the lineup changes took place, views on the worldwide political climate, and a decent amount of scene talk from the always engaging gentleman.

Dead Rhetoric: How are things regarding your recent shoulder surgery and recovery – and is this the worst injury you’ve had in your career, especially in an off-stage festival setting?

Schmier: Yes. I’ve had a few broken bones before and tendons, but this shoulder is an important part of the body. It’s the biggest problem I’ve ever had, everything is connected to the shoulder. It was not funny when it happened, and a big learning lesson for me. I was never in the hospital for a long time until this. When you dislocate your shoulder, they put you on narcotics to put your arm back in its socket. I’m recovering well, I was happy to get the surgery.

When you can’t play, it’s not just like taking a spa day. We are not independent as musicians, if you are fucked for a while, the whole band is in a crisis. I am lucky I didn’t put my band in a crisis, we could continue- we played shows illegally without even telling my doctor, it’s rock ‘n roll. I have to get the movement back, because I was in a cast situation with my shoulder muscles. It makes your muscles decay very fast and your tendons shorter. I should start the physiotherapy next week, I’ve been doing the exercises ahead of time. I decided to listen to my body instead of my doctor, and so far, it’s been a good decision.

I can’t do crazy rotor movement with my shoulder and so forth. I hope to start back with sports soon, I was told I couldn’t do anything with sports for two months. That’s disturbing because I like to work out. When your body knocks on the door, you start to appreciate your health again. I’m glad I could get out of it as good as it is now.

Dead Rhetoric: The biggest change since your debut Send Them All to Hell occurred with Herman Frank leaving and gaining two guitarists in V.O. Pulver and Pontus Norgren – was this a smooth process to integrate these musicians into Pänzer, and did it significantly change the songwriting process for Fatal Command?

Schmier: It would have been a difficult time if we got two junior-level guys in the band. V.O. Pulver was the producer for the first Pänzer album, and he was the second live guitarist for those gigs that happened. When we continued, he was the first guy I asked if he wanted to join us and write songs with us, and it worked out pretty well. It was all a big question mark for a little while. Pänzer is about having fun, and with two guitar players we didn’t want to have to work from scratch. Pontus is also familiar to us, he is a good friend of Stefan’s, and a good friend of mine. He’s also a very busy guy but he really enjoys music and he’s an easy guy to work with. You want to have a continuation with the band that are friends.

The songwriting at the beginning was a bit of a question mark- but after we wrote the first song together which was “Satan’s Hollow”, it was magical. We released this as a demo as a (teaser), and we knew it would work. When we knew Pontus was going to join the band, we wrote all the songs with two guitars (in mind)- that makes this album for me so much better. I’m a big fan of two guitars, just gives the material double harmonies and much more lead possibilities, (that) classic heavy metal has two guitars. In Destruction we are a three-piece, so I push the two guitar players in this band really hard, because I wanted the best out of them. I had my vision of how Pänzer should sound with two guitars and I think it did very well. You can hear the second album has more guitar harmonies.

Dead Rhetoric: In trailers for this record, you mention the importance of chemistry and vibes, especially when looking at the history of heavy metal as far as great records. How do you maintain a balance between paying tribute to your early heroes and influences while writing fresh material in this group?

Schmier: I’m a big fan of vibes. If you look at the history of heavy metal or rock and roll, all of those bands wrote their best albums when they were friends. I think that’s something I’ve learned through all these years being in the industry, if you don’t have a good relationship with your bandmates, it’s very difficult to write good material together unless you write evil, destructive styles of metal. For me at least, this is why Destruction broke apart back in the day, you could really tell that things weren’t working anymore.

With Pänzer it was very important that the new guys are friends and it’s easy to write. We don’t have to talk much about what we are doing- we just do it and it all comes together. Pontus was on the US tour for Hammerfall when he was recording his parts for the Pänzer album. He would have the finished song, and he contributed his parts in a back lounge, he made a little studio in the back of the tour bus and he would send us what he recorded. Let the music do the talking is more or less what we did- we didn’t discuss too much about what we wanted the band to sound like. This band is about playing music and paying tribute to where we come from. It’s also about no boundaries, no big expectations. There will always be people saying ‘oh my God- this is nothing new.’ We aren’t doing it for them- we are doing this for the people that want songs in the old way.

Dead Rhetoric: You shot your latest video for the title track at the infamous Z7 club – what memories do you have surrounding this venue, and what makes it such a special place?

Schmier: It’s very close to my home, even though I live in Germany it’s just 40 minutes away from where I live. When I go to shows I often will go to this club in Switzerland instead of the shows in Germany. They have the best gear, the biggest stage, the best people working there, and when the best cook died they hired even better people, so they have the best catering. It’s the perfect size for a venue- too big of a size venue doesn’t sound as good, and you can fit about 1,500 people here- and you can make it a little smaller for the smaller events. All the big bands that I love played here, I’ve met a lot of bands that are now friends of mine and we’ve played there a lot of times of course. When I go out on tour and I meet other bands, we talk about the best venues in the world everyone mentions Z7 to me. They have laundry machines, nice backstage showers, and nice people. You feel like you are a rock star on a holiday when you play that venue.

We thought when we would do a video for this album, we didn’t need any big scenery. A real performance clip like it was done back in the day when I was young, getting into heavy metal – those performance clips with bands playing heavy metal, seeing how they played the songs and you just catch the energy of the band. We wanted to pay tribute as well to this venue that we grew up with, to catch this old school vibe, that was an important task for this video clip.

Dead Rhetoric: Did you ever imagine we would be living through as tumultuous a political climate on a global scale as what we are going through currently? As a result, I’d imagine it allowed you to come up with plenty to tackle in the lyrics for Fatal Command?

Schmier: The cover looks so political, but not everything on the album (lyrically) is political. But some topics right now are very important and I had to write about them. There is a lot of stuff that happens (politically) even in Europe- more so than the world politics. Especially dealing with Europe falling apart, as a European citizen we have been trying to grow together and have the same currency, borders without passports- and this is all going away now. The immigration problems that we have had the last few years, that was pushed by the media but it’s also affected many of our countries. I have a need to write about that- I like to write about real life in the lyrics. Not all the songs are political though. The cover is also a tribute to the 1980’s- in the 80’s we did covers in this comic style, politically incorrect to comment on different things. Heavy metal covers these days try to look like art- we wanted to go back to the roots and have this 80’s familiarity. It’s not anti-American – just because Trump is on the cover, does not make it anti-American. We have some controversial people on the cover, that’s what makes the cover so cool. The Trump fans may be butt hurt, but don’t be so uptight. 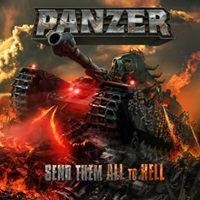