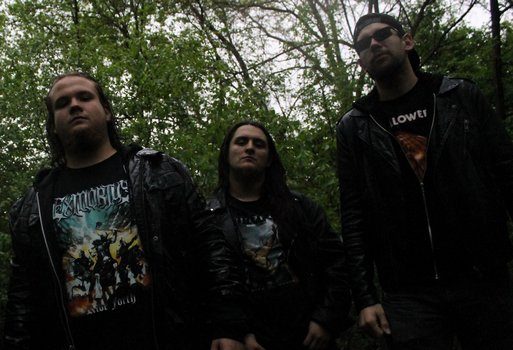 Considering the tools at the feet of metal musicians these days, the skies the limit when it comes to proficiency and creativity- especially if you enjoy multiple genres. Hailing from Chicago, IL – Opacia in its four-year history has been quite productive, releasing a demo, single, EP and now full-length effort for On Blackest Wings. Currently a three-piece in the studio and seeking a second guitarist to start bringing this material to live across stages locally and beyond, their style embraces a versatile thrash/melodic death template – acts domestically and abroad that really push the limits of speed, intensity, and power but never forsaking hooks, melodies, and catchy grooves. It’s not often that you think of a band that can be like Iced Earth or Amon Amarth one minute, then switch into Children of Bodom, Revocation, or Immortal the next and have it make sense – which is the case for Opacia here.

We reached out to guitarist/vocalist Luke Sever who was happy to answer our questions regarding the development of Opacia, their releases, the outside activities the members have in other groups, and thoughts on the thriving Chicago scene plus future goals.

Dead Rhetoric: Opacia began in 2015 – what can you tell us about the early formation of the group? Did you all know each other because of previous bands (or current ones) in the scene, and did you know straight away the types of qualities you wanted to put across with your brand of melodic death/thrash, or was there a feeling out process?

Luke Sever: Opacia originally began as my own project branching out further from the normal realms of thrash metal that I had been playing. Rich (bassist) and myself were in a band together at the time and when I had the first idea for Opacia I immediately went to him to play bass. Mike came in when we were looking for a drummer and Rich had met him at a show a year or so beforehand. He was playing drums for Nucleus and we knew he had the chops for what we were doing. There wasn’t much of a feeling out process going into writing since we all have similar interests and inspirations.

Dead Rhetoric: You recorded a demo, single, and EP within 2016 – what can you tell us about the songwriting and recording process for these efforts? Were there any surprises, obstacles, or challenges that took place during these recordings?

Sever: The recording process for our demo was really, really low budget. I was in high school at the time and we had access to some low level recording equipment, so I had the original three songs written and I had a friend help me record vocals while the guitars were recorded direct-in and drums were programmed. For the We Ride EP, the recording experience was much more professional. We recorded with Dan Klein of Iron Hand Audio and he was an amazing engineer to work with. During the recording sessions for the EP, some issues arose with the drum recordings and Dan had actually stepped up to the plate and recorded the drums not knowing any of the parts. He finished in only a couple of weeks which totally blew our minds.

Dead Rhetoric: On Blackest Wings is the band’s first full-length album. Where do you see the major differences in this effort compared to your previous work? Where do you sense the areas of change or growth that maybe took place?

Sever: This album was a major stepping-stone in all of us growing as musicians and bandmates. The largest difference at first listen is certainly the quality of the recording. On Blackest Wings was recorded by Joe Tiberi and he accomplished so much more than we could have even imagined with making this album come to life. Mike’s drum part writing had become much more complex and that added another edge to what the album was coming to be. There was also a larger amount of melodic/epic elements in this album compared to the EP, which is what we were striving for in conveying the stories.

Dead Rhetoric: Who came up with the cover art – and what do you believe you are trying to get across visually with this?

Sever: The artwork was a collaborative effort between me and Rich. It is derived directly from the title track. The main antagonist in the story of the track is an ever-growing god that had been using his human creations as cattle to grow and become ever more powerful, but the people had seen him as benevolent and kept praising him. In the end of the story, the god finally returns to earth in a fiery rage to destroy all he had created which is the mountain that is in the artwork, along with the skeletons of the innocent that were being burned along the way.

Dead Rhetoric: Most of the songs on the new record clock in between six-seven minutes. Discuss the challenges of keeping listener interest in that format, how do you know when the parts are seamless and interesting without overtaxing or boring the listener?

Sever: We’ve never really found much of a problem in the lengths of our songs. We’ve always strived to tie the different parts of the songs with leads and drum fills to bring everything together. If we can listen to the full track and never get bored, then we know that the track is in a good direction. Changing chorus’ and adding melodies in parts where they weren’t before has always helped.

Dead Rhetoric: How would you describe Opacia when it comes to your live show and performance? What do you want the listeners/attendees to get out of this, and what have been some of the more memorable performances to date for the band?

Sever: We make our performance as energetic as we can get it. We want to make the show as entertaining as possible for the people that paid to come even if we’re the opening band. If they paid a $10 cover, then we want to put on a $30 performance. I think the most memorable show we’ve played was opening for Insomnium at The Forge in 2018. Slayer was playing the same night and the venue was still packed even for us! Super energetic crowd that gave us amazing response.

Dead Rhetoric: There are diverse influences in the band’s sound – everything from Revocation and Exmortus to Iced Earth, Death, and Children of Bodom among others. Does this veritable musical stew and outlook contribute to the type of fresh, original approach Opacia has and hopefully will maintain over the course of your career?

Sever: It certainly does. We try to pull influence from as many different artists as we can, because every musician has a different way of expressing in certain genres. I am a huge fan of Alexi Laiho and his playing and I pull major influence from him in my lead playing, but I don’t want every single solo to sound like him. The fast rhythm sections of all the bands mentioned above has been a major part of us building our songs from the ground up.

Dead Rhetoric: What do you see as the biggest challenges or obstacles that Opacia is currently facing – and what steps need to be taken to overcome them?

Sever: Currently the biggest roadblock in our way is finding a second guitar player. We have had many different players come and audition but we just haven’t found the guy yet. So playing live shows is sort of out of the question until we can fill out our sound, especially with how busy all of us are in our personal lives.

Dead Rhetoric: The members of Opacia also play in other original outfits beyond Opacia. How do you balance the activities of all these bands, are there acts that take priority/ precedence over the others?

Sever: For now Opacia has been sort of displaced amongst all of the other bands that we play with. We still love writing the music for it, so that will never go away. Rich has The Eldritch Grimoire, who has been gaining steam and playing tons of shows. I also have Crusadist, who has multiple tours and an album release coming up. So we wanted to put out the Opacia record to make sure that everyone can hear the music before it gets pushed too far back.

Dead Rhetoric: What are your views on the state of the heavy metal scene – both on a local basis within Chicago, as well as how your outlook is on the overall scene globally?

Sever: Chicago has a very diverse and interesting scene. Ever since I’ve started playing around the city, there has been multiple changeovers in the bands that stick to the forefront. Overall, it seems metal has been making quite the comeback. It’s exciting to see bands finally breaking through the higher levels of touring and bigger shows that have always deserved it.

Dead Rhetoric: How would you describe the personalities of each of the members of Opacia – and what unique qualities do you think each member brings to the table to aid the cause?

Sever: All three of us are like, 8 years old at heart. Me and Rich are huge nerds and love video games and movies. Through us playing games, we’ve both found influence in soundtracks from the games we both love. Especially from the Dark Souls series, since there are 3 songs on On Blackest Wings that are from the games. We have been great friends since the beginning, so we don’t tend to have the civil issues that a lot of bands have, so writing the music has always been a very easy process and we all bounce off of each other’s ideas all the time.

Dead Rhetoric: What would be the top three albums in your collection of all-time – they can be metal or otherwise? Also, what have been some of your favorite concert memories, purely as a fan when you’ve attended shows?

Sever: I think my top three records of all time would be Slave to the Sword by Exmortus, The Sound of Perseverance by Death, and Dawn of the Nine by Unleashed. I’ve loved all three since the very first day I had heard them, and they’ve never left my rotation. My favorite concert memory is seeing Exmortus in a tiny bar called Bada Brew with Warbringer and Enforcer. The show was originally supposed to be at Mojoes when that was around, but got moved to Bada. Seeing all those bands so close and personal was an amazing experience that I will never forget, especially after meeting them all for the first time. Another would be seeing Amon Amarth for the first time (yet again with Exmortus) at the Riviera Theater in Chicago. Their huge stage performance was an absolutely life changing experience for how I viewed shows.

Dead Rhetoric: What’s on the horizon for Opacia and any other bands/activities on the music front over the next twelve months?

Sever: For the time being, we are hanging back and writing more songs as they come to us. The new album has done pretty well and we are so humbled by how everyone has received it. Hopefully we’ll have another album ready for everyone in the next year or so. As soon as we have our arsenal back on track, we’ll return to playing shows. Until then, Crusadist has an album coming out in the fall with a tour to follow, and some more shows that we’re playing at home. 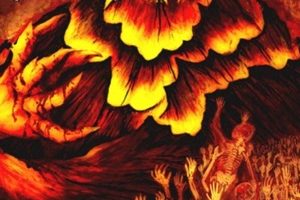