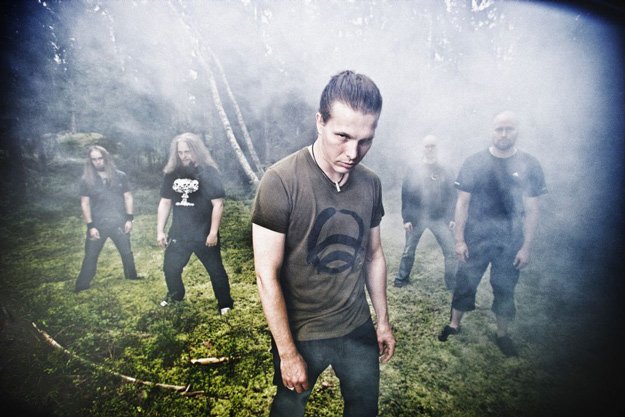 Fitting that the first interview Blistering runs for 2011 is for the band (and an album) that in all likelihood, will end up at the top of our year-end list a good 11 months from now. Omnium Gatherum’s New World Shadows is perhaps the best slab of melodic death metal in over a decade, the union of all that is melody-laden, memorable, and cohesive. The Finns had already carved out their own sound through the years with dirty melo-death gems such as Spirits and August Light, Stuck Here On Snake’s Way and 2008’s The Redshift, butNew World Shadows is on an entirely different plane.

The architect is founding member/guitarist/primary songwriter Markus Vanhala, who, after the departure of longtime guitarist Harri Pikka was able to spread his melodic wings, culminating in the opening epic “Everfields,” the brazen melodic thrash of “Ego,” as well as the haunting “The Distance” and world-beater (and best OG song to date) “Nova Flame.” When combined with the obvious growth of singer Jukka Pelkonen, the results are simply breathtaking…there are no flaws on New World Shadows.

With its release a few months down the road (it’s due in early March in North America via Lifeforce), Vanhala was able to respond to Blistering’s gushing queries in a relatively short amount of time. This was the fourth time we’ve chatted with OG, yet Vanhala’s enthusiasm (as well as ours) was palpable. Read on…

Blistering.com: First things first, as someone who has followed you guys since the Steal the Light EP, it is my belief New World Shadows is your best album to date. Is that the consensus amongst the band?

Markus Vanhala: Thank you, sir! And yes, we all agree with ya on this one that this album easily is the best and the most finished and completed piece of work we’ve done yet, and that’s the truth, nothing but the truth and not only the promotion campaign even it also it is that too, ha-ha. I spent countless hours and nights with this one and I’ve never done anything as much focused than this precious album. As our vocalist Jukka said on the press release, “this is the album we’ve been wanting to do for years,” and I couldn’t agree more on this one! Now we got all our matured skeletons from the closet and put everything on tape just like we’ve always wanted… and good things have come to this!

Blistering.com: Going into the songwriting process for New World Shadows, did you have any idea as to what you had on your hands?

Vanhala: Our previous album The Redshift was a success for us and it got us touring much abroad with great bands like Nile, Dark Tranquillity, Swallow the Sun etc., so of course it was challenging to start to write the successor for it, as also we were really pleased with that album. This time it was also the first time I had “the pleasure and the curse” to compose the whole album now all by myself, so I had the vision that the new album will be a slightly different kind of Omnium Gatherum album and I thought more about the whole big picture since from the beginning to write the album. I also wanted to search myself what I was after then in the mid-90s when I formed this band, flew back to those big feelings and emotions of the teenage-me and that way, the magnum opus breed itself slowly but surely. This kind of things have somehow lost during the years, but I’m really happy that I found those feelings and managed to carve those to songs here. I’m sure that’ll be heard here. This time I also did lots and lots of pre-production at my studio and polished the ideas over and over again, so it plays a big role here too.

Blistering.com: You’ve always been dubbed as a melodic death metal band, but always had some type of grit to your sound. With the new album, a lot of that “grit” is now gone and it’s incredible to hear the melodies you’ve created. Do you think you now fully embody the melodic death metal tag?

Vanhala: That melodies vs. the grit were around because of the interaction between me and OG’s previous long-time guitarist Harri, who left the band before this new album. As I’m more into melodic stuff, that’s the reason what drives the notes and chords here to that direction. Of course New World Shadows is still heavy as a really heavy thing, but I like my OG metal more with melodic-edge. Maybe this is more “melodic death metal” than OG ever, but there’s a lot more progressive stuff and all kinds of spices between the lines than the “usual” melo-death bands on average. I’m also a big fan of prog rock and bands like Rush, Marillion, Genesis, Yes and dig also much trip-hop like Massive Attack and stuff like that and even pop music, so I guess there comes that variety and the overall spirit not to be only “basic-melodic-death-metal” that’s usually quite boring nowadays…

Blistering.com: Did the departure of Harri affect the songwriting? Or was it a motivating factor?

Vanhala: Of course this is one of the main factors with the album difference and after the first annoyance with the thing, I took this also as a big motivator for me to have my own path here now without compromising with him style-wisely. Of course we have also a new bass player Toni [Mäki] on board and he is a bad-ass dude so it has motivated and boosted also things in the band!

Blistering.com: You always had a fair share of melodic songs before (i.e. “A Shadowkey” and “Greeneyes” come to mind from the last album), but all of these songs have some form of glimmering melody to them. How did that come about?

Vanhala: Eh, it should have been that the moon and the stars were aligned and the spirits and the hobgoblins of the music were on my side as they we’re humming and whispering these perfect notes to my ears. Like I said, I think that the melodies and musical hooks are cool! We were just finally as honest as we can be musically with this record and it turned out to be the best that we can deliver. If people won’t understand our thing here and now, then it would seem that they won’t ever understand us. Well, hopefully they do but we’ll do this anyway!