Omnium Gatherum Reflects on “The Redshift” 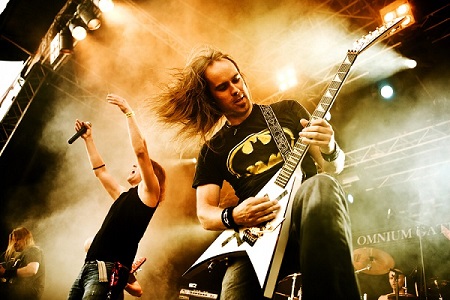 Considered by many – not just the band – to be Omnium Gatherum’s “next-level-up” album, 2008’s The Redshift has received the reissue treatment via the band’s former label home, Candlelight Records. Timed for release on February 25th just as the band’s first-ever North American tour was in full swing opening for Sweden’s Dark Tranquillity, the reissue sees only a handful of live and demo tracks tacked on to the regular running order, but, it’s the guts of the album worth re-investigating.

As the body of work that effectively opened the melodic gateways that are all over 2011’s unbeatable New World Shadows and last year’s flawless Beyond, The Redshift brought upon a rare moment of continuity for the band, with the album being their second with Candlelight, second with vocalist Jukka Pelkonen, and second with keyboardist Aapo Koivisto.

“Lots of ‘second chances,’” begins guitarist/founding member/principal songwriter Markus Vanhala. “But I think we made it on the second chance. On The Redshift I made clear to myself to get rid of all the ‘test drives’ and ‘searching of our stylistic ourselves’ demons and I just wanted to let go and continue on the path that was natural for us – to do more melodic stuff, as that’s what we like. It was a smart move, after Years in Waste and Stuck Here on Snake’s Way, ‘cause in my opinion, the band was lost on those records.”

“Reflecting back on that period of time of OG it is true that some stability member-wise was established,” chimes in Pelkonen. “Also for this fact and some other factors our style of creating music was transforming really on The Redshift album to the style it also represents nowadays. At the same time, though, there was quite a transformation happening within OG. This transformation was due to the changes that happened after Stuck Here on Snake’s Way. When making The Redshift, it was quite clear to us that this was style-wise, the mold we would be using in the future too.”

The path/mold the Vanhala/Pelkonen pair are referring to is the increased usage of melodies, something that almost become an afterthought on the aforementioned Years in Waste and Stuck Here on Snake’s Way. While those two albums are formidable in their own right (good for you if you caught the OG pun), they didn’t bring forth the band’s true colors the way they should. Album cuts like “A Shadowkey,” “Greeneyes,” and “Second Flame” certainly establish the notion that this was a more elaborate, but no less immediate OG.

“I just started to write more melodic songs with this one, ’cause I just simply love more melodic stuff and wanted to come back in a way towards the glory days of Spirits and August Light,” notes Vanhala. “There was no leftover stuff, so I started from absolute zero and the first songs to emerge were ‘Second Flame,’ ‘Shadowkey’ and ‘Nail,’ and I right away noticed that I’m going to the right direction and just kept on exploring and composing via that path!”

Case in point: The above-mentioned “A Shadowkey,” the album’s most saccharine, and enjoyable cut. “I made it in my livin’ room and was happy when it was ready and called to Aapo to come and check it out, as back in the day he was living in my neighborhood, that’s all I remember,” says Vanhala.”I think the song was highly influenced by Rush, so it’s death metal Rush.”

Another left-turn made on The Redshift was “Greeneyes,” the album’s potential ballad entry. Snake’s Way had a song of similar restrained degree in “Just Signs,” but “Greeneyes” is the next level, especially with Pelkonen’s underrated clean vocals.

“Concerning the slower songs ‘Just Signs’ and ‘Greeneyes,’ [they] are both very different compared to each other,” lends the singer. “When you think of the atmosphere of the songs, they quite different. ‘Just Signs’ is gloomier and [more] shady than ‘Greeneyes.’ Naturally, both these songs are good ones to add some clean vocals. It is a matter of taste in my opinion which one the song has catchier melody for example in clean vocals because of the fact that they are so different. We must remember this is still death metal music and the adding of clean vocals on any of the songs is always done with a lot of consideration. All the angles are covered and the logic of using clean vocals in some parts is gratified.”

Initial press runs for the album included a quote from one Dan Swano, a man who almost singlehandedly ushered in the melodic era of Swedish death metal via Edge of Sanity: “I hate bands like Omnium Gatherum, they are so good it pisses me off!!! Their fine blend of melody and aggression is so good I actually thought about stealing the record and releasing it as my own. You won´t find a better album in years.”

In a bit of excellent timing, Swano had just reactivated his legendary Unisound Studios around the time the band was recording The Redshift, and after receiving an email inquiry from Vanhala, the two parties decided to work together with Swano in charge of mixing and mastering.

Swano’s response to hearing Omnium Gatherum for the first time is one of enthusiasm:

“Why the fuck haven’t I heard about these guys before?” begins our man from his German base. “This is awesome stuff!”

The parallels between OG and Swano’s Edge of Sanity are evident, but not overwhelming. However, the prevailing sense of melody and progressive elements effectively binds the two together, making OG an act Swano has championed repeatedly.

“I was the ambassador for AOR-style melodies in Edge of Sanity in ’93 to ’96, and of course it felt cool to hear that other bands grew up up on our stuff and also opened musicians of the more brutal kind to bands like Marillion and Rush…the other guys in EOS never took a liking to that stuff, though.”

In the five years-plus since the release of The Redshift, Omnium Gatherum’s career arc has now surpassed the expectations the band placed on itself in 2008. So in essence, it’s a classic example of a band finding its sound, exploiting it on succeeding releases, then becoming bonafide stalwarts. The spoils of such focus, of course, are a direct result of how good the band really is, though.

“It’s a good album and have lot of good memories about it, as it kinda started the era of OG to be a “real band” professional wise,” finishes Vanhala. “There’s lots of OG classics on the album that we still play live actively, like ‘Nail,’ ‘A Shadowkey,’ ‘Chameleon Skin,’ and ‘The Return.’ The album followed much touring in Europe with Dark Tranquillity, Nile and Swallow the Sun and we had the days of our lives, finally. Now we have a ‘second round’ of days of our lives with Beyond album, as this album have finally opened the gates for us outside Europe. Last year we toured Japan twice and also played in South Korea and China, which was truly awesome indeed! And now we’re finally coming to North America to start touring!”

“The Redshift is still maybe my favorite album of them all,” wraps Pelkonen. “I don’t know why this is. Maybe it has something to do with The Redshift being that album which really started to define OG’s art and all it stands for. So if I am forced to name the best album, it probably would be The Redshift.”

For a complete and comprehensive overview of Omnium Gatherum’s career, check out our two-part Infinite Minds: The Omnium Gatherum Story, which can be found here, and here.