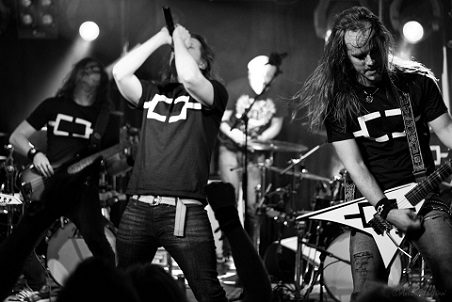 DR has the good fortune of being able to communicate with Omnium Gatherum guitarist/all-around nice guy Markus Vanhala on a semi-frequent basis, meaning, the possibility of when – or if – the band was ever going to make it to these shores was a common point of discussion ever since the two of us became email pals a few years ago. Basic logistics like tour support from the label, work permits, visas, etc., were typical roadblocks, but, when you’re a critically-acclaimed band, with an excellent album to tour behind, along with a swelling fanbase in North America, the impossible eventually becomes possible. Alas, the Finns finally made it over to North America this winter.

Touring in support of their 2013 album Beyond, OG nabbed the main slot in front of Sweden’s Dark Tranquillity, prime real estate given the sonic parallels between the two. Indeed OG has made the most out of the opportunity – turning a profit on the tour thanks to stellar merch sales, not to mention an all-around enthusiastic response from crowds that admittedly, surprised the band.  Then again (and this is from our 100% biased viewpoint), OG are rather easy to like…they are metal’s preeminent melodic death metal band, after all.

In total, the DR staff caught the tour three times, the first with Matt Coe in Worcester; the other two in Cleveland and Pittsburgh, the latter of which was the destination for an in-person interview with Vanhala. Vocalist Jukka Pelkonen was supposed to join too, but apparently, he had a little too much to drink the night before in Louisville, so down (or should we say “dahn”) to Pittsburgh staple Primanti Brothers we went for a chat on the second to last day of the tour…

Dead Rhetoric: Tour highlights, other than last night: What jumps out?

Markus Vanhala: Tour highlights…in Memphis, we were having a blast with Mikael [Stanne] from Dark Tranquillity and our Joonas [Koto, guitars] and going to these cool blues bars. They’re everywhere. That was really cool. Plus, Las Vegas…

Dead Rhetoric: I remember you telling me the story of when you were in West Virginia with Insomnium and they wouldn’t take your Finnish ID at some bar.

Vanhala: After Cleveland, we had the same thing. We had a day off in Boise, and we were going to the gas station to buy some beer and they didn’t even accept Finnish passports, so we were like, “Fuck, these guys are in their 40s, and we’re in our 30s, and you still won’t sell us beer?” Luckily, our merchandise guy, Chad, is American, so we had him do it, but we were hiding around the corner when Chad was buying us beer, like in the old-school days. [laughs]

Dead Rhetoric: So Memphis was good, the bus broke down, though…

Vanhala: The bus broke down in Virginia on the second day of this tour, then we had to wait five hours to get a van and, then [we] got into a small van, both us and Dark Tranquillity. Then we got the new bus to Baltimore. After New York, we got our old bus back, but our bass player [Erkki Silvennoinen] didn’t remember that we changed buses, so all of his gear was on the old bus, so as we were crossing the border to get into Canada, he didn’t have his wallet, passport, or anything. The old bus was already 900 kilometers away, so we had to use FedEx. Erkki was left behind, so when we came to Montreal, he had to use a taxi to get to the gig.

Vanhala: I know. But, gladly we made it, although we were already planning to play Montreal without bass because it was sold-out. I think it was the best show of the whole tour, Montreal.

[One of DR’s long-time friends Argel Marchelletta stops over and introductions proceed.]

Vanhala: The moustache makes the man.

Dead Rhetoric: So where were we…Montreal worked out, even after the bass player scare.

Vanhala: After the first busy week, it became really easy-going. I would say all of the gigs have been good.

Dead Rhetoric: If Jukka were here, I was going to ask since this is his first time over here what he thinks of the States, like the driving distances and so forth. What’s the feeling you get from the guys?

Vanhala: Yeah, when we were in Texas, there’s like a huge distances. You had four days in Texas, but two gigs because of the long distances and it was nothing. You can look out the window for five hours and there’s nothing. It’s such a big country.

Dead Rhetoric: You and I have been talking about this for a long time, the prospect of OG finally making it over to the States, so now that you’re here, has it lived up to your expectations?

Vanhala: Yeah, it was worth the wait. When we were here with Insomnium, I was just really happy to be here, and I thought we’d never make it with Omnium Gatherum here. It seems that our label has done something good because the feedback has been really good. We’ve been really surprised.

Dead Rhetoric: You’re a known quantity here in the States, probably more than you think.

Vanhala: The Dark Tranquillity guys said they have been surprised we’ve been selling so much merchandise, which is cool because it’s expensive to have all the visas and flights, but they said they’ve haven’t seen a support band selling so much on their tours like this.

Dead Rhetoric: Were you worried about taking a loss on this tour?

Vanhala: Yeah, we were worried because we thought we’d lose a lot of money, but now, we’re making a profit, so it’s great. Big business.