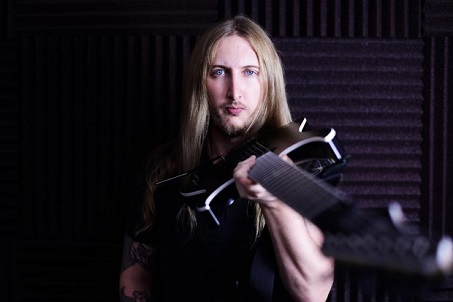 The reshaping of The Haunted’s lineup was a long time coming, with the band having effectively spent itself creatively well before the release of 2011’s critically and commercially-panned Unseen. Most underground ‘heads still see the band as the ripping, maniacal thrash act that popped out 1998’s invincible self-titled album, 2000’s Made Me Do It, and 2003’s One Kill Wonder, so the Peter Dolving Mach II era of the group was never quite accepted.  And so after the departure of Dolving, drummer Per Moller Jensen, and primary songwriter/guitarist Anders Bjorler in 2012, a phone call was placed to emerging Swedish guitarist Ola Englund.

“Jensen [The Haunted guitarist] gave me a call after he’s been watching a lot of my videos, really,” begins Englund. “Starting talking about gear and stuff and he eventually popped the question. I didn’t know any one of the guys from before. I’ve been knowing this for almost six months and it’s hard to keep it in, for sure, especially when you’re so excited about something. But we kept our cool, which definitely gave the unveiling a lot more impact.”

The unveiling Englund is referring to took place on June 26, with Made Me Do It-era vocalist Marco Aro, and original drummer Adrian Erlandsson rejoining the fold (bassist Jonas Bjorler rounds out the lineup). With the blatantly more aggro and death metal-infused Aro out front, Englund said fans of the band’s early 00’s output will be pleased.

“The new stuff is definitely going to be heavy and fast. That goes without saying now that Marco is back, really. Also, I think it’s a healthy direction for the band to strive towards. I’m personally a fan of all The Haunted albums but I’ve always been a straight-up 90s metal guy. That just appeals more to me.”

“Unseen is an awesome album, counters Englund. “I love it, but I’m not thinking of that album when I think The Haunted. For me, The Haunted is about thrash and almost at the point of being death metal.”

One of the main reasons for Aro’s departure in 2003 was because of the band’s heavy tour workload. With the members of The Haunted also engaged in high-profile bands like At the Gates, Paradise Lost, Witchery, The Resistance, and Six Feet Under, some creative scheduling is going to take place once the band’s new album hits.

“The Haunted is not going to be a touring band right now, but we’re not saying we’re NOT going to tour ever,” notes Englund. “For now, we’re going to play festivals, one-off gigs here and there. So yeah we’re going to focus on the album and our other stuff. I wouldn’t mind touring, though. I like to keep myself busy.”

Aside from The Haunted, Englund keeps himself busy as lead guitarist in the above-mentioned Six Feet Under and his own project, Feared. Feared, who just released their excellent Furor Incarnatus this year, is Englund’s undisputed baby band, a visceral combination of groove metal ala Pantera, and thick, molten death metal. “I’m not a trendy guy,” admits Engund. “I just keep on playing the old Pantera rip-off riffs I’ve always been playing ha-ha. Hopefully there are still people enjoying that kind of metal.”

In his spare time (whatever that is for Englund), the guitarist has built an impressive array of YouTube videos for guitar gear aficionados. Engaging and knowledgeable, Englund could probably make a living running his own music store, but alas, commitments between Feared, Six Feet Under, and now The Haunted will keep the Swede incredibly busy through 2013 and beyond.

“I’ve always been a gear-nerd in that sense that I always wanted cool shit,” he finishes. “Back in the day, the most metal tube amp out there was a Mesa Boogie Dual rectifier and I remember getting one. It was just so awesome. I’ve always been the hardworking kind of guy and I’ve always liked having a lot of stuff happening. The stress pushes me in a good way.”