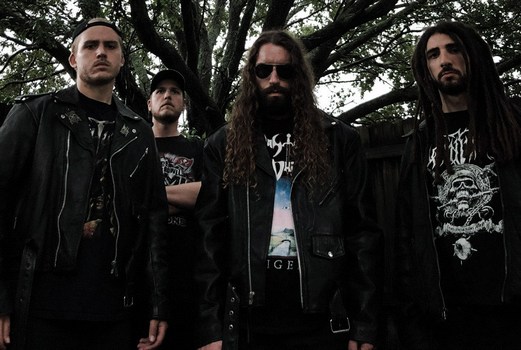 Edging closer and closer to the end of this year, much of the new release deluge is now behind us. It’s been a very busy few months though, especially considering the pandemic at hand. So we have our work cut out for us when it comes to finding new material to enjoy. This month we check out Anthea, Bloodred, Carnal Ruin (pictured above), Curimus, Distant, Furnace, Infesticide, Repuked, Sense of Creation, Sinner’s Blood, Skyless Aeons, Thurisaz. 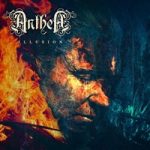 Anthea – Illusion (Rockshots Records)
Originating as an outlet for vocalist Diego Valadez (Cellador) and drummer Peter Vasquez (Angel Sinestro) to combine melodic symphonic metal with cinematic, theatrical, and extreme elements, Anthea are now a full band releasing their first album in Illusion. The nine songs run the gamut from Kamelot/Nightwish-oriented efforts like “Reach” and the title track to broader affairs with neoclassical/progressive strains such as “The Light Divine” that can be slightly Dream Theater-oriented. “Moirai” appears in two versions – one featuring Moonlight Haze singer Chiara Tricarico in a duet situation while the closing rendition is an orchestral aural display. Great to hear more US bands getting into this style – their insight as well genre-blending propensities offers more diverse material and can appeal to a wider array of metalheads. – Matt Coe (Anthea official website) 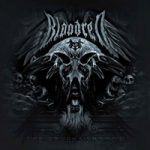 Bloodred – The Raven’s Shadow (Massacre Records)
This German blackened death metal act Bloodred consists of mastermind Ron Merz on all vocals/instruments outside of studio help from Leaves’ Eyes/ Atrocity drummer Joris Nijenhuis. For their second album The Raven’s Shadow you receive nine songs that pummel in fierce aggression and caustic darkness – and yet there’s an added sense of epic melody on certain guitar aspects to keep tracks like “We Who Rule the North” and the title cut evoking Primordial/Bathory-esque charm. The windy atmosphere and steel hits give the nine-minute closer “The North Star Whispers (To the Blacksmith’s Son)” that extra chilling feel, twin guitar melodies against calmer clean strains then shifting into some cultural riffs and thick tremolo parts – to heavy and dark, headbanging delight for all. Think Emperor and Amon Amarth meets a touch of Amorphis of old here – fascinating and killer. – Matt Coe (Bloodred official website) 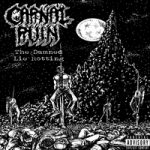 Carnal Ruin – The Damned Lie Rotten (Redefining Darkness)
If pure, unadulterated death metal is your thing, it’s time to latch onto Carnal Ruin and go for a ride! Just enough buzzing guitars to get you to reminisce a bit, while they cook up a series of riffs that are bound to catch your fancy. It’s raw and energetic from beginning to end, which is exactly what this style requires, and the aforementioned riffing is heavy as required while stil giving the music an enjoyable fun factor to bang your head to. It’s only four songs, but if you enjoy death metal you are going to play this plenty of times over. – Kyle McGinn (Carnal Ruin on Facebook) 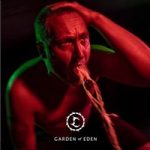 Curimus – Garden of Eden (Inverse Records)
Lobbing an intriguing death/thrash cocktail since the mid-2000’s, Curimus arrived at their third full-length Garden of Eden. This Finnish act possesses an acidic roaring vocalist, riffs that straddle the two aforementioned genres, and tempos that can groove one minute and push the accelerator to the floor over the next measure. In thirty minutes these ten tracks kill much like At the Gates, The Haunted, and later day Sepultura along with a bit of Teutonic thrash rage from the early Sodom/Destruction mold. Picks to click: “Ignite” with its heads down crunch and versatile speed kick hits, the mid-tempo stomp of “Eradication Manifest” which features some interesting progressive guitar sweeps and bass heroics, plus the deadly closer “Absence”. Curimus may have taken six years between records, and yet the bruising and battering nature of their material makes this well worth the wait. – Matt Coe (Curimus official website) 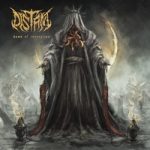 Distant – Dawn of Corruption (Unique Leader)
Last year’s Tyrannotophia wasn’t exactly an exciting one. Distant’s modern take on deathcore and slam is excruciatingly heavy but sadly it’s also pretty excruciatingly boring at the same time. The band plods around with the slow tempos and attempts to conjure up some atmosphere at times, but the lumbering tempos never really elicit much energy, even when they do pick up a little speed. It’s more about that ‘damn that’s heavy’ vibe, but when there isn’t much to back it all up, it turns into a pretty underwhelming experience. – Kyle McGinn (Distant on Facebook) 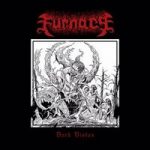 Furnace – Dark Vistas (Soulseller Records)
By simply mentioning that Rogga Johansson does the guitars and vocals, you can already get a good idea of what Furnace is going to be playing, right?. You would think that, but this bit of Swedish death metal has an even more melodic feel to it than many of Johansson’s other acts (not to mention the lack of a HM-2 inspired tone). Instead, Furnace is a murkier and more foreboding affair which plays to its Lovecraftian influences well and the melodies feel more Amon Amarth than say, Entombed. Enjoyable stuff, with plenty of melodic undercurrents to keep it moving with triumphant heaviness. – Kyle McGinn (Furnace on Facebook) 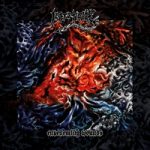 Infesticide – Envenoming Wounds (Blood Harvest)
It’s really easy to imagine Infesticide being some big Morbid Angel fans. Envenoming Wounds has a old school death metal sound that practically screams it. The twisted, angular riffs feel otherworldly and the death metal occasionally bordering on thrash vibe has a certain Altars of Madness feel to it. At the same time though, the band’s sound is so energetic and furious that it’s hard not to root for the act. Infesticide have a barnburner on their hands with this one, so we’ll let the Angel-isms slide this time. – Kyle McGinn (Infesticide on Facebook) 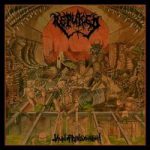 Repuked – Dawn of Reintoxication (Soulseller Records)
Rotten old school death metal at its finest. Dawn of Reintoxication takes the filthiest sounds of yesterday and vomits them out with plenty of enthusiasm. Autopsy and Pungent Stench rank high on the influences list but better to go for the grimy and slimy in this case than being the millionth Swedish iteration. The riffs consistently work, whether it’s an all-out rager like “Kick Fuck” or a more oozing track like “Morbid Obsessions.” Bottom line, if you like your death metal on the dirtier side, you are going to really dig this one. – Kyle McGinn (Repuked on Facebook) 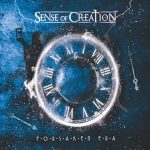 Sense of Creation – Forsaken Era (Revalve Records)
Developing in London, England a decade earlier but returning to their native Italian home in 2018, Sense of Creation is a symphonic rock/metal act issuing their debut album Forsaken Era. The five-piece blend together a melodic hard rock and symphonic metal template where the keyboards and guitars possess equal roles in the aural landscape, while singer Elisa Tomaselli employs various whispering to smooth clean and semi-operatic melodies to convey her thoughts. From a piano-driven ballad like “Sorrow” to the cyber/electronic-driven strains of the dramatic “Iustitia” as well conventional symphonic metal numbers like “Misery” and “Hidden by the Light”, you get the sense that Nightwish and more streamlined work of Amberian Dawn, Sirenia, and Epica along with a touch of gothic influences comes into play as far as outlook and tones. Already having a second album written, this is an adequate start for those who love melodic symphonic metal with focused writing and delivery. – Matt Coe (Sense of Creation on Facebook) 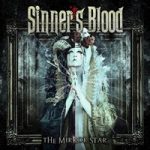 Sinner’s Blood – The Mirror Star (Frontiers Music)
South America has always been known as a continent with a passionate metal scene – and they are starting to alert the world to their domestic talent. Sinner’s Blood hail from Chile, a newer quartet content to churn out some catchy melodic heavy metal for their debut The Mirror Star. Developing catchy power riffs, neoclassical awe-inspiring breaks and grooves on top of the potent Russell Allen meets Dio-esque pipes of vocalist James Robledo, songs like “Phoenix Rise”, the slinky commercial-leaning “Never Again” plus seven-minute epic ballad “Who I Am” sit in that class of Firewind/modern Primal Fear artists: robust, sharp, and skilled at writing and executing memorable songs. Curious to watch the development of this act. – Matt Coe (Sinner’s Blood on Facebook) 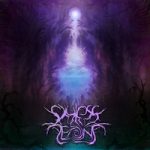 Skyless Aeons – Drain the Sun (CDN Records)
Being drawn in with the progressive death metal tag, Skyless Aeons present their debut with Drain the Sun. While the progressive elements are there (plus a fine bass inside), there’s a lot of death metal to behold. It’s not a bad thing for sure, but the problem lies in that many of the riffs just fail to take flight. There’s a lot of longer cuts (7-minutes +) that could do with some shortening to get them to their point. It ends up costing the band, as the tracks wander past their finest points. Hopefully it will be a problem that is less evident next time around. – Kyle McGinn (Skyless Aeons on Facebook) 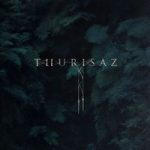 Thurisaz – Re-Incentive (Self-Released)
The hits just keep coming. I’ve had the pleasure of reviewing stellar, atmospheric albums from Wake and Lesser Glow this year, and now Thurisaz has joined the fray with Re-Incentive. Lush, opulent, and engaging, this record is both soaring with synths and devilishly brutal at the same time. The yin and yang of harsh and clean vocals work perfectly to convey the heartbreak and dolorous themes of this LP. The songs roll with suite-like purpose, it’s quite hard to pick a highlight but if I have to name them, it would be “Exemption”, and “Isle of No Man”. Both of these songs are affecting, somber and channels the likes of Sigur Ros or Haken, with nary a note or moment wasted. Thurisaz manages to be just as heavy with the piano-laden tracks as they did with their black metal-inflected tracks. They have mastered the art of balance between darkness and light, crafting an album that is an exhilarating journey to the deepest recesses of one’s soul, enriching one’s days with every listen of Re-Incentive. It doesn’t get any better than this. – JE Batin (Thurisaz on Facebook)