The year is inching to the finish line (let’s get this election out of the way, too), which means the release schedule will be less voluminous than before. However, independent metal labels are often immune to the spending habits and/or proposed releases of far bigger labels, so plenty to go around, hence the October 2016 installment of Rapid Fires. In this month, we cover Afterlife Symphony, Brainstorm, Fetid Zombie, Gateway to Selfdestruction, GosT, Istvan, Leaves’ Eyes, Mercyless, N.K.V.D., Northern Crown, Not Above Evil, Predatory Light, Sentient Horror (pictured above), Silence the Yearning, and Zix. 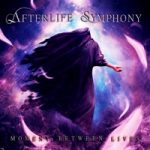 Afterlife Symphony – Moment Between Lives (Revalve Records)
Throwing emphasis on both angles for a change, Afterlife Symphony are an Italian symphonic metal band on their second album Moment Between Lives. Dramatic flourishes, semi-operatic vocals, and engagement on an emotional level make this 11 track, almost hour-long record stimulating. Many will hear Epica/Within Temptation reference points musically for “Broken Breath” and the swooping darkness that is “Novembre (Part II)”, but there’s also an uplifting nature and progressive/gothic shift to “Half-Moon Light” and “The Abyss” which carries The Gathering to the forefront, especially through Anna Giusto’s voice and phrasing. The best aspects of this genre occur out of contrasts – Afterlife Symphony understand this, while developing a series of infectious songs. A newcomer ready to breakthrough for sure. – Matt Coe (Afterlife Symphony on Facebook) 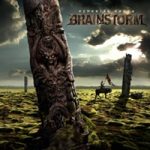 Brainstorm – Memorial Roots Re-Rooted (AFM Records)
Appeasing fans disappointed in the original Sascha Paeth/Miro production, German power metal band re-root their eighth studio album Memorial Roots from 2009, fleshing it out with an Achim Köhler remix and 4 bonus tracks that were on digipack and overseas releases as well as an edit for “Forsake What I Believed”. Using a more heads down, heavy American-oriented power philosophy (no happy hooks or cheesy melodies here), songs like “Ahimsa” and “Shiver” shine, while an Accept-oriented “Too Late to Deny” probably should have been a proper album inclusion due to its strong, thunderous mid-tempo riff hook. 77 minutes of music, collectors will flock to this more so than the new brigade. – Matt Coe (Brainstorm official website) 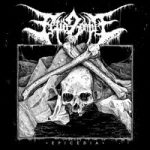 Fetid Zombie – Epicedia (Transcending Obscurity)
One of esteemed artist Mark Riddick’s projects, Fetid Zombie have been cranking out material since 2008. Epicedia claims title to the act’s sixth full-length, of which Riddick himself handles much of the musicianship (sans a number of guest spots). Old school death metal is the name of the game, and with four tracks in the 8-10 minute range, one may approach with caution. But it proves unnecessary as Fetid Zombie are much more than one might initially expect, with flourishes of melody and atmosphere to help along the way. In fact, the older death metal feel is never compromised, but the melodies are often splendid and fit surprisingly well. The musicianship is second to none here, and should start to give Riddick a musical following that rivals that of his artwork. – Kyle McGinn (Fetid Zombie on Facebook) 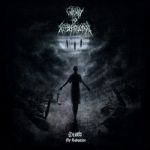 Gateway to Selfdestruction – Death, My Salvation (Northern Silence Productions)
Merging elements of atmospheric black metal with Katatonia-esque riffing make for interesting bedfellows on Death, My Salvation. A good mix of the emotions, moving from more aggressive black metal sections with anguished screams to the more melodic and melancholic. The Katatonia-inspired riffing gives a more rock-ish feel (think more Discouraged Ones/Brave Murder Day than newer material) at times, such as on “Soziopath” but doesn’t alter the mood of the album from its blackened aspirations. Plenty of bleak melodies to sink your teeth into – a strong debut and a band to watch. – Kyle McGinn (Gateway to Selfdestruction on Facebook) 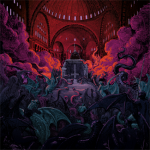 GosT – Non Paradisi (Blood Music)
Blood Music, as so documented on this very site, specializes in selecting bands from all over the extreme music spectrum, metal or not. Factor electronic outfit GosT into the equation. Guided by sole member Baalberith, Non Paradisi is intended to be the musical adaption of Milton’s classic Paradise Lost novel. Now, only three of these jams feature vocals (the best of the bunch being “Supreme,” which features Hayley Stewart), but the vibrant strokes of the synths create enough of a ruckus for Non Paradisi to drive home its point, and for GosT to continue its upward ascent. – David E. Gehlke (GosT on Facebook) 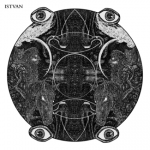 Istvan – istvan (Aural Music)
Always a head-scratcher when a band has vocals, but hardly uses them. Like, why have them at all if they’re going to be on the sideline 90% of the time? Such is the issue for Italy’s Istvan, who are an indistinguishable stoner/doom troupe. The bulk of their self-titled album trots out the usual array of retro, Sabbath-loving riffs, occasionally offset by droopy laid-back parts. Album closer “Kenosis” has some boogie ramp-up to it, yet beyond that, pretty forgettable, if not staid stuff. – David E. Gehlke (Istvan Bandcamp) 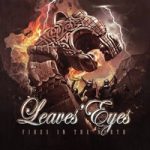 Leaves’ Eyes – Fires in the North (AFM Records)
Let’s call Fires in the North what it is – a sneak peek at new vocalist Elina Siirala outside of her performances with the band of late (let’s also avoid the much-publicized controversial departure of longtime vocalist Liv Kristine). A short release no doubt timed to align with the band’s North American tour, the only new track here is “Fires in the North,” albeit in both electric and acoutic versions. Both have their perks, with the electric giving long-time fans some confidence that Leaves’ Eyes are going to continue along with their path at the same level of aptitude as they have with the past. The acoustic version lets Siirala take centerstage and proves she has some impressive pipes that will continue to drive the band forward. The 3 remaining tracks (“Edge of Steel,” “Sacred Vow,” and “Swords in Rock”) have been updated only with Siirala’s vocals, which may irk some fans, but do their job at telling that Leaves’ Eyes have found the right vocalist to move forward with. – Kyle McGinn (Leaves’ Eyes on Facebook) 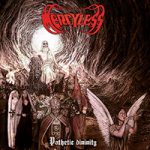 Mercyless – Pathetic Divinity (Kaotoxin Records)
French death/thrash band Mercyless on their sixth studio album Pathetic Divinity continue on the path of their early 90’s roots – issuing 10 tracks of punishing metal in the early Morgoth/Morbid Angel vein. Persistent blasting against sick transitions plus the whammy bar/ tapping-oriented lead breaks keep the energy at a peak level, while guitarist Max Otero has the Chuck Schuldiner-oriented growls down pat. Shifting from fifth gear overdrive to mid-tempo doom/death in “A Representation of Darkness”, the low-tuned pinching within “Left to Rot” against the relentless double kick action proves Mercyless are out for blood and crush the weak who stand opposed to their command. Sure to satisfy the old school death crowd. – Matt Coe (Mercyless on Facebook) 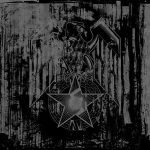 N.K.V.D. – Totalitarian Industrial Oppression (Krucyator Productions)
French industrial black metal act N.K.V.D. is the brainchild of Autokrator’s Loic F. So you can expect the relentless, but it’s not without some of its own creepy charm. The industrial tones are quite bleak, and seem to hit the sweet spot with the frantic black metal elements – designing a tone that veers off from most “industrial black metal.” It’s dark, frequently blast-ridden, but provides enough variety to ensure it doesn’t feel like one long, crushing beat. Containing the band’s first two works, the long sold-out Diktatura and Vlast, there’s plenty of material to keep one occupied – not to mention the notable shift from the more direct and oppressive Diktatura to the darker and more atmospheric Vlast. – Kyle McGinn (N.K.V.D. on Facebook) 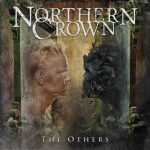 Northern Crown – The Others (Self-Released)
Lots of classic doom boxes to check off here, as Northern Crown are adherents to vocal-dominated, riff-oriented, melodic doom (the best kind, obviously). Vocalist Frank Serafine picks his spots carefully in the gallant “Surreality (No One Came to Mourn Me)” as well as “Les Autres,” a heavy-handed cut that leans on Euro angles. Clearly a band with their hearts (and minds) in the right spot (note: they previously covered Candlemass, so there you go), Northern Crown proves to be a fine entry into the American doom cabal on The Others. – David E. Gehlke (Northern Crown Facebook) 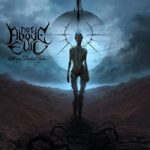 Not Above Evil – Always Darkest Before (Self-Released)
UK/Swedish trio Not Above Evil are quite an interesting melodic death/metalcore crossover band – as their third full-length Always Darkest Before portrays a potent cocktail difficult to forget. It’s not very often you hear a vocalist in bassist Sideeq Mohammed who can move from Randy Blythe acidic-oriented screams to death bellows at the drop of a hat – while musically you get a lot of entertaining hypnotic licks against triplets and punchy deep groove sequences (“Adrenaline” sure to sever heads). Balancing off to the races material like “Fibre and Sinew” with more of a deeper, Unearth-ish vibe on “Compression”, Not Above Evil has much love for both Scandinavian melodic death as they do the American modern scene. Better than expected. – Matt Coe (Not Above Evil on Facebook) 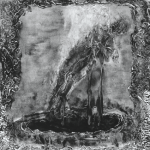 Predatory Light – Predatory Light (Invictus Productions)
Some worthy dudes make up Predatory Light—members of Ash Borer, Triumvir Foul, and Vanum, to be exact—giving the band the ever-important instant scene credibility. Playing a rather haunting, robust blend of blackened death metal, the band’s self-titled debut plows through six songs, many of which rip off twisting, off-kilter melodies (“Lurid Hand”) and proto black/death stomping (“Divine Membrane”). As per the usual, this is atmosphere-first stuff, so the production tends to lend itself to the intended result. In the end, Predatory Light’s debut fits in nicely with the current wave of legitimate, retro-hugging bands. – David E. Gehlke (Predatory Light Bandcamp) 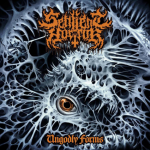 Sentient Horror – Ungodly Forms (Redefining Darkness)
When Dan Swanö (Bloodbath, Edge of Sanity) says you’re one of the “best SweDeath projects” he’s come across in years, you know you’re doing something right. While Sentient Horror are from New Jersey (Swanö was probably referring to the band’s sound, not their geographical locale), they hit upon all the marks with Ungodly Forms. Purveying the classic Stockholm sound with a bit of a modern twist, the band’s searing death metal angles are on full display via “Splinter the Cross” (love those opening harmonies) and the pounding “A Host of Worms.” Give this band a few years. Soon they’ll be on Dark Descent or Metal Blade. – David E. Gehlke (Sentient Horror Facebook) 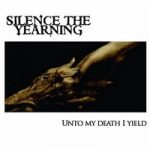 Silence the Yearning – Unto My Death I Yield (Slowdriver Productions)
The first full-length from Spanish melodic doom/death act Silence the Yearning, following up an EP released last year, Unto My Death I Yield leaves a solid impression. Melancholic riffs that can evolve into almost uplifting melodies are the band’s strongest facet, recalling bands like Katatonia and Rapture. Upfront and emotive growls also lend some credence to the band’s vision, which fit the music to a tee. In fact, the biggest gripe here is that out of 8 tracks, there’s an intro, outro, and interlude – meaning there’s only about 25-minutes of songs. The songs don’t fall too far outside the expected doom/death format, but being that they are such a pleasure, it’d be great to hear another full song or two. – Kyle McGinn (Silence the Yearning on Facebook) 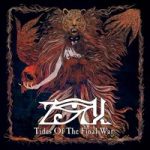 Zix – Tides of the Final War (Pure Steel Records)
A Lebanon heavy metal band, Zix on their first full-length Tides of the Final War hoist a traditional heavy metal flag a la Iron Maiden, Dio, and older Manowar/Virgin Steele through these 10 songs. Between twin guitar harmonies, galloping tempos, and Maya Khairallah’s potent female range, the Middle Eastern nuances make the title track and “Dark Days of Babylon” early favorites. Plus “Metal Strike” features a bevy of metal veterans on guest vocals/guitars: Tony Martin, Paul Di’Anno, Ross the Boss, and Jack Starr among the bunch. Recording in the United States with veteran Steve Thompson (Metallica, Anthrax) gives these 10 songs added punch and power. Zix embodies a love of the genre that keeps interest, especially in an area not as well known for its metal prowess. – Matt Coe (Zix on Facebook)