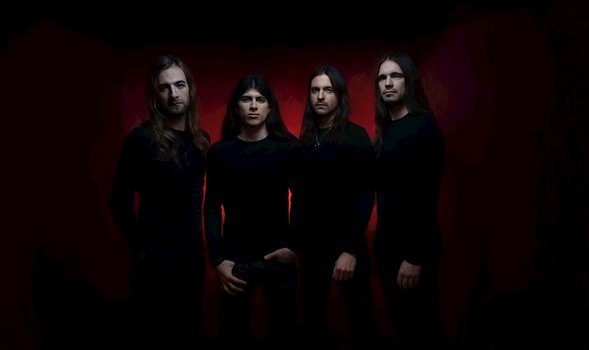 Almost a decade ago, Obscura released Cosmogenesis to the masses. Helping to rush in the tech death onslaught (along with earlier bands like Necrophagist of course), what made Obscura stand out was their sense of melody that they could bring into the fold as well. They could play technical circles around many an act, but they were able to bring that appeal to a much larger base with their use of some catchy melodies and hooks. It’s a formula that they’ve continued to expand upon with each release since.

Which brings us to the next major point. Every album since Cosmogenesis has been connected to the same overlapping theme. The band’s recently released Diluvium successfully fulfills the lofty 4-album concept and sees Obscura at their strongest, from a creativity standpoint. We grabbed mainman Steffen Kummerer for a round of conversation on Skype just prior to the album’s release date to discuss putting the finishing touches to this cycle and what’s next, his interest in astrophysics and philosophy, and some further discussion of U.S. visa issues.

Dead Rhetoric: Diluvium completes the 4-album cycle. How do you feel that it ties things up?

Steffen Kummerer: First of all, I’m very happy that we finished it after roughly 10 years. We never expected it to take so long in releasing four records, but it did. To be honest, I’m feeling very grateful that we finished what we started. There’s so many people out there that announce something and it never happens. We simply finished it and I’m very grateful that we put out four records that connect to each other, and that there’s also a progression if you listen to Cosmogenesis and then listen to Diluvium. There’s a raise of quality in terms of production, and at least from my perspective, in terms of songwriting and musicianship. Everything has gotten better with each release. I’m grateful that we finished the records, but at the same time, I’m relieved that we are able to do whatever we want for the next record. We finished the cycle and I don’t know what we are going to do next.

Dead Rhetoric: So you don’t intend to do yet another 4-album cycle once again?

Kummerer: [Laughs] I’m not sure. I’m already 33, so if I survived the first four everything else is a bonus [laughs]. To be honest, I’m not sure if I really want to do a long-lasting concept or if we just want to release a certain record. I have a couple of thoughts in both directions but I’m not sure yet. Back in the day, we simply came up with the idea because we signed a record deal for 4 records. We picked together a couple of ideas of how to connect the four records. It was something that no other band had done before, at least in the death metal scene, or extreme metal scene. We also wanted the albums to fit with each other. Okay, we are the ‘planet’ band, but it was a serious and thought-out concept. All four of those records are fitting to each other. There’s always opposing colors, like red and blue, green and yellow, and all of the names are connected: Diluvium, Omnivium, Akroasis, and Cosmogenesis. The lyrics fit within each other. They were simply built up year by year.

But now it’s done so I’m not sure what to do next. I’m not sure if anyone has done something similar – when we had the first idea, I remember that Led Zeppelin was a big influence because they named their records by number. We put together a certain cycle – it was clear where it started in the path, with the origin and the last one being the apocalypse. But what do we do in between? Finding the concept for Omnivium took a while – but of course, what happens after the origin? The evolution. The third one was a little more tricky, with developing consciousness. It took a while. Diluvium is representing the end of all ends, the apocalyptic scene is very metal [laughs]. It’s a totally metal topic and that was the ultimate aim to achieve – writing an album about the apocalypse and writing the end of all ends.

Dead Rhetoric: Could you talk about the lyrical content for this album, as I know it’s a major component how things are connected?

Kummerer: The whole album picks up where Akroasis left off. Akroasis was showing the idea of how a certain state within religion, astrophysics, or philosophy is building up its own consciousness and it’s very aware of the ultimate end. Diluvium is picking up all those ideas, while being connected to Omnivium and Cosmogenesis, and at the same time picking up a couple of storylines which also have to be brought to an end. It’s not the classical, ‘Hail Satan, everything is exploding’ type of lyrical theme. It’s more of a certain, melancholic ‘witnessing’ idea.

There’s a reason that I picked “Clandestine Stars” for the opening track. “Clandestine Stars” is more or less telling the story of clandestine stars, which are witnesses of this whole cycle. The whole four album cycle is dealing with the never-ending cycle of birth, evolution, consciousness, and dying. So it’s about birth and death, and getting reborn again and again. So those stars witness because they have their own consciousness and are aware of the cycle as they are the only remaining parts of existence. Like in Marvel Comics, there was the Silver Surfer in the ‘80s, he was the witness. The stars are facing the end of all ends, but they are trapped in this cycle because they are aware of what is going on and how it is repeating. They are begging for relief, or the ultimate end, and looking for the last farewell. There’s a very strong line, “This is our last farewell,” because they are looking forward to that ultimate end in an absolutistic perspective, that this is finally being finished. They are not looking forward in a happy or sad way, they just want to see that it is done.

It’s a melancholic fading away than a big explosion. I tried to represent this idea and looked into it in terms of vibes. I’m not looking at ‘how technical this riff is’ or ‘what is the theory behind this or that melody and writing something in that key,’ I’m thinking more about how to translate the idea I have in my mind. It doesn’t matter if it is a complex song or an easy song, it doesn’t matter. It’s just a vibe. This is what I tried to reproduce in those lyrics. I tried to write the perspective/process of how the world ends from different religious point of views, as well as the philosophy and astrophysics views. I’m mixing a couple of ideas to attempt to write my own story.

Dead Rhetoric: How important is melody with all of the technical rhythms at play?

Kummerer: Very, very important. As a technical death metal band, we are a bit different than most of the bands in the scene since we work a lot of hook lines, either with a chorus that you can sing a long too, but also with melody lines. A good example was the song “Incarnated” from Cosmogenesis. On Diluvium, there’s “Mortification of the Vulgar Sun” or the vocal line in “Clandestine Stars,” pick any song. There’s a certain anchor, hook, or vocal that stays in your mind. It’s opening the door for all the music fans. Fans that aren’t studying music and playing an instrument. They aren’t listening to the music from an analytic point of view. I want to give everyone who is listening to the band, like at a festival for example, the option to simply digest the music and understand it and have a good time.

They can understand the music on a surface level with all of the hook lines, while everything beneath can be the ultimate complex music. Especially with the rhythm section, it’s more complex than more classical or jazz because there’s so much happening and it’s all thought-out. But you can understand it if you can digest more extreme music. Somehow there’s room for both. To be honest, it represents the music that I really like. I want to be able to listen to music that I can listen to when I’m in the car or working, and at the same time it gives me joy to listen to music with a more analytic following when I break a certain song into pieces and listen to the arrangement, or what is going on with a certain instrument to see if its thought-out or improvised. All of that gives me joy, and somehow this merges into Obscura. So to come back to your question, all of those hook lines and melodies are extremely important to us.

Dead Rhetoric: You mentioned this already a little, but what do you see as the points of Obscura that have changed over the years?

Kummerer: That’s a good question, and a mean one as well [laughs]. It’s really hard to point a finger on it. I would say that each record represents a snapshot of time, so at each stage/year we were able, as a band, to accomplish an album like this. From Retribution to Omnivium to Diluvium, it doesn’t matter, it’s just a snapshot. Likewise, you have to understand that there was a big progression from being a beginning band in 2002 when we started as teenagers to being a world-wide touring band that plays shows every year, and has experience and knowledge about technique, production, and how to arrange songs. All of the experience that we have built up over the last decade and longer.

It’s really hard to point out one spot. What’s easier to explain is that we always had a DIY attitude. We did most of the work on our own. We didn’t have management or anyone who would tell us what to do – the right or the wrong way. I would say a changing point was getting picked up by Relapse in 2008 and released Cosmogenesis in 2009. That had a big impact on the band, especially in the US. No one had really heard the band over there until that point. So there was a breakthrough, and it was a big difference.

Dead Rhetoric: You’ve discussed working with an orchestra on an album. What would be your goal for such a project?

Kummerer: I had that idea for Diluvium actually. I wanted to write a record with a full orchestra, but the problem was budget. We had to face the situation that we write the record and use plastic instruments, like sound libraries, or make it right and not do that. We decided that we didn’t want to go the cheap way and work with plastic instruments or libraries, so the whole idea of keeping the whole orchestra in one song, which is “Ethereal Skies.” We invited two special guests to record that piece. I really want to work with an orchestra on an album, and it’s on my bucket list for the future. We somehow have to either find the funding in the government – like cultural funding, not a GoFundMe or something. I really want to do this, and not have the orchestra playing the root notes, but composed and thought-out as a real part of the band. It takes a lot of time, and if you compare a production like this with a regular metal production, its crazy. You would need between 50,000 to 100,000 US dollars extra. It’s a little out of touch at the moment, but it’s on my bucket list. 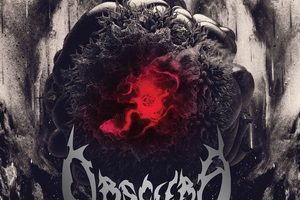 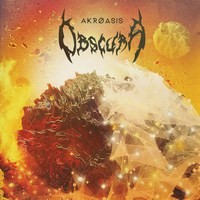 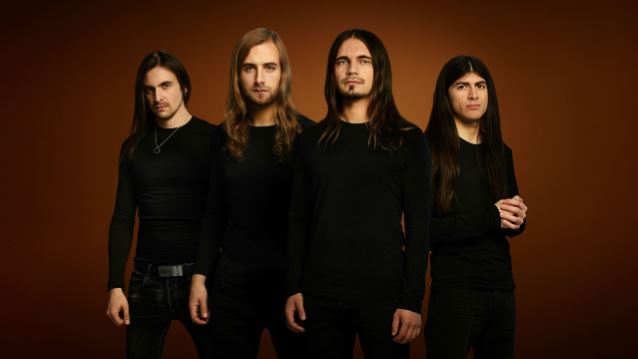