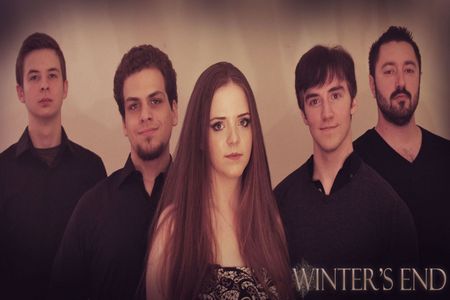 If you seek, you shall find. Discovering new bands in the metal genre is literally at your fingertips, as social media outlets have expanded our tastes to infinity and beyond. Recommendations can come from friends, other bands, PR firms… or in the case of Winter’s End, discovering a link to preview their new material through Facebook. Hailing from Boston, MA – this quintet performs in the symphonic metal genre that is quickly ascending as one of the favored styles not just across Europe but also North America.

Lost in the Light is their debut EP, a 5 song odyssey into cinematic-oriented orchestration, stellar guitar play, a rock solid rhythm section – and the operatic soprano mastery to bring all of the atmosphere and visions to life. Finding it necessary to delve a little deeper behind the band, keyboardist Ryan Johnson would handle these questions. Prepare to learn more about their positive lyrical outlook, their views on the genre being an American band, as well as what the future may hold. Appropriate that this feature is appearing in the winter… though not at the end.

Dead Rhetoric: Tell us about the development of Winter’s End in terms of finding the right members – did you know right away the type of symphonic metal that you wanted to develop?

Ryan Johnson: I knew since I was 16 the type of music I wanted to do – it was just a matter of finding the right people to do it with. I was in a different symphonic metal band for a while; after we broke up, I knew finding the right members for the next project was the most important thing.

(Bassist) Devin (Fauteux) was the first to be hired – I had worked with him in the past on song lyrics with my old band. Jess (Frost) came next, after over a year of searching for the right vocalist. (Guitarist) Zach (Bergeron) and (drummer) Aris (Mavrides) came on board in the last four or five months.

Dead Rhetoric: Your debut EP is Lost in the Light – can you give some insight into the songwriting and recording process, as well as any challenges or surprises that came up?

Johnson: I think Lost in the Light will be a curious case for us, as when I wrote it, I did not know who would be playing the music (going forward now, I will be able to write to the strengths of our lineup). Also, some songs, like “Elysium” and “Loathe”, were written over three years ago, whereas others, like “Equinox”, were written just last year. For this EP, I wrote all the music and most of the lyrics (Devin wrote the lyrics for “Only Through Darkness”), but that may change for future releases.

I think the biggest challenge we had in doing this EP was just to stay patient – as with any recording, things took longer than expected. Additionally, we started recording in February 2015 (with an incomplete lineup), but Jess had an amazing once-in-a-lifetime opportunity to go to Nashville, and so we had to postpone recording until August.

I recorded the keyboard and orchestra parts myself, along with the rhythm guitars (as we were recording before we had found Zach). Zach wrote and recorded all the guitar solos himself. Jess recorded herself as well. I handled all the mixing and mastering duties.

Dead Rhetoric: Vocalist Jessica Frost as a classically trained soprano singer went to Berklee College of Music – how do you think this training impacts the overall ability of her melodies within Winter’s End? Do other members of the band have any formal musical education or training?

Johnson: Jess is an irreplaceable part of our sound – the cornerstone to all of what we have done and will do carrying forward. Her training is a key asset, but even more so is her passion for this kind of music. When we auditioned vocalists, she stood out as being a fan of the genre and bands within the genre already, which I think made it really easy for her to jump in and find her way in the songs. She also knows her own voice really well, so if I’ve written some melody that she thinks could be replaced with one better for her voice, we do that. She makes sure the songs are as vocally strong as they can be.

Zach is a very advanced guitar player, even more so when accounting for how young he is. He’s had private instruction on jazz improvisation but is largely self-taught.

Aris is a veteran drummer – he’s played for around a decade and has been/is in other bands, such as Ramius.

Devin has a very acute sense of what will work lyrically and what won’t. I may write a lot of the lyrics, but he’s the real poet here. It’s because of him lyrical phrasing and (hopefully) lyrical content isn’t cringe inducing.

As for myself, I’ve had a music theory class in high school, but aside from that I am self-taught. I prefer to hear the music in my head and then write it down, figuring out harmonies and layers as they come. I’ve been in other metal and jazz bands before; I think just surrounding myself with very talented players has made me a better musician and composer.

Dead Rhetoric: Symphonic metal has obvious roots in a lot of European bands such as Epica, Leaves Eyes, Nightwish, and Within Temptation among others – but it seems to be gaining a strong foothold in North America. Do you think the time is ready for American acts to break through -and how does your approach differ to set yourselves apart?

Johnson: I certainly hope it’s time for some American acts to break through! Of course, there are some similar North American bands out there already, such as Kamelot (while they have members in different countries, they’ve historically been based out of Florida) and Evanescence (which, while not exactly symphonic metal, is quite similar). In this Boston-based metal scene alone, I’ve watched a steady increase of these kinds of bands, so I’d say it’s more of a “when” than “if” at this point as to when one will break out.

Our approach is a bit different in a few ways. The first, most important thing to address is our lyrical content and message – predominantly, we are focused on being positive and spreading a message of hope and happiness. I can’t speak for all the members of the band, but I’m a very happy person. While I love metal more than any other genre, I couldn’t imagine writing a whole album of dark, gloomy songs – so we don’t! I think in this way we are able to differentiate ourselves a bit from other bands in the genre, which often focus more on the darker side of life.

Also, while symphonic metal is often considered a very orchestra/keyboard-driven genre, I try to give the other instruments their time to shine. Zach is quite a prolific guitar player, and I think that shows (in the solos on Lost in the Light, and even more so on future releases). In the end, we want to create music that is familiar enough that people can jump into it, but different enough that they’ll stick around for the whole album.

Dead Rhetoric: What do you think of the New England music scene as a whole- as it seems that there is plenty of variety in terms of metal bands, clubs/venues to play, and promoters willing to help the scene?

Johnson: So far the scene seems fantastic. We haven’t even made our live debut yet and we’ve connected with some promoters who have been very generous and kind. There is a surprising amount of variety in the metal scene here – I’ve seen other symphonic metal bands, thrash bands, power metal, death metal… you name it, it’s probably here. I’m very eager to mix and mingle with the scene and see what kinds of exciting shows we can put together!

Dead Rhetoric: What are three albums that everyone can agree upon as benchmark records in the symphonic metal genre?

Johnson: While I can’t claim to be an expert on the genre, nor can I say these are the definitive albums that encompass everything the genre is about, I can say these albums (along with many others not in the genre) have had a huge influence on my writing.

Nightwish – Once: It’s not my favorite Nightwish album (that goes to either Century Child or Imaginaerum), but it has “Ghost Love Score,” which very well might be one of the finest pieces of music ever made.

Kamelot – The Black Halo: I’ve always thought of Kamelot as symphonic power metal, so I think I can include it here. Kamelot prove here they are true masters of storytelling, and showcase how important it is to have an emotive vocalist.

Dead Rhetoric: Have you begun the writing process for the next Winter’s End product? Also, do you think Winter’s End will be the type of band that varies their songwriting from effort to effort or are you pretty happy with what you’ve established so far?

Johnson: I’ve been writing symphonic metal songs for four years now, and have a massive back catalog of songs. Additionally, I’m always writing new ones. So definitely, we’ve begun our next album already. We may even have a little something to release in a few months, although it won’t be an album…

I want every song I write to feel a little different from all the rest. I can say now, with the four or five songs I have so far for the next album, they will contain experiments with new sounds and time signatures, among other things. That being said, I want to make each song play to the strengths of our lineup. Once again, I think it’s about keeping a familiar enough sound so that people will continue to latch onto it, but shaking things up just enough so that they’ll listen to the whole thing.

Dead Rhetoric: What does the rest of 2016 look like for Winter’s End in terms of promotion and activities? Will you be playing live shows to support the EP, and are there plans for an official video?

Johnson: 2016 will be a very busy 12 months. We will spend a large part of it promoting Lost in the Light, through online avenues, word of mouth, and of course, shows! As for video promotion, that remains to be seen. It will be largely dependent on our schedules and budget, but if we don’t do one now, we certainly will down the road.

We’ve booked our live debut for February 27 at the Wreck Room in Peterborough NH, which we’re really excited about. We’ll be playing alongside other great acts, including Thunderforge, Verscÿthe, and the Mike Kerr group. We’ll be booking more shows in the months to come – we’ll post all updates on our Facebook page, so for anyone who’d like to keep up with us, be sure to follow us there!

We’d like to give a huge thank you to Dead Rhetoric for their kind review of Lost in the Light and this interview. 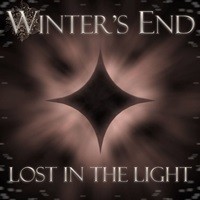