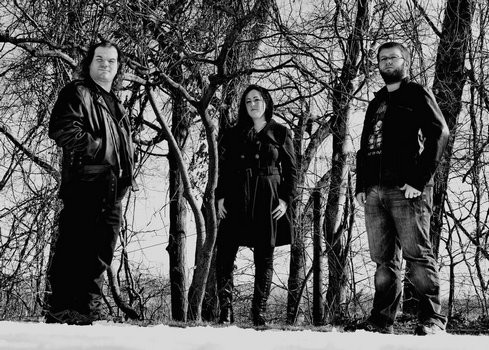 Gaining awareness over the past year in singular digital doses, Virus of Ideals is a culmination of musicians who wish to take a lot of their favorite elements of two particular sub-genres in metal – melodic death and symphonic – and develop a story-telling platform that is all their own. Painting pictures through piano and orchestral components beyond the conventional aggressive/ electric instrumentation, the group also use a dual melodic/growl vocal aspect that provides the necessary contrast the four-piece embodies.

The debut EP For All My Earthly Days has enough versatility, harmony, heaviness, and surprises that everyone into acts like Anneke-era The Gathering to Dark Tranquillity, Nightwish to In Flames, and even a little Elvenking can appreciate where Virus of Ideals takes the listener. Handling these questions is keyboardist/male growler Sean ‘Orc’ Adams, and you’ll learn more about the ambitious lyrical content for the band, the importance of strong art and imagery to their style, as well as some special Omnium Gatherum concert memories beyond learning a little bit more behind this outstanding group.

Dead Rhetoric: Can you give us some background into Virus of Ideals – how the wheels were set into motion to find the right players for this group, and did you have a vision from the start to combine melodic death and symphonic metal styles or did this grow out of the members on hand?

Sean ‘Orc’ Adams: I was playing around with the idea of starting a full band a little over two years ago, but wasn’t sure what style to go for. I hadn’t made this desire public, but coincidentally Jess sent me a message out of the blue. She had been a fan of my solo music for a couple years and casually suggested contributing guest vocals to a future song. I listened to about 30 seconds of the demo she sent me (a cover of “Nemo” by Nightwish) and I was blown away. I was still unsure at the time exactly what style to go for, but I knew that I really wanted her to be a part of it.

As for combining melodic death with symphonic, I don’t want to say it was an accident, but I just write the kind of music I would enjoy listening to and playing. When it comes to songwriting, I love melody, aggression, a big sound, and mixing up traditional song structures. I’ve always liked bands with multiple singers as well, so it was a happy coincidence that Jess sent me the demo when she did.

Jess, our former guitarist, and I went into the studio with a temporary drummer to just record “Bitter Parody” last December. We invested in a good studio, as well as high quality album art and a pro logo. It was a big initial investment, but we wanted to present ourselves as serious musicians and thought we would have better success attracting dedicated members by having a ‘finished product’ rather than just a couple rough demos, and it worked. Within 3 months, we added Dylan (then-bass, now guitar) and Francisco (drums).

Dead Rhetoric: You initially released a single “Into the Flames” earlier this year through your Bandcamp page to gain initial traction. How do you feel about that response and did you receive decent feedback/awareness beyond your CT homebase globally?

Adams: It was great to finally have a new song to share, since our only song up to that point (“Bitter Parody”) was released back in February. The response to “Into the Flames” was overwhelmingly positive. We put up EP preorders for the hell of it, not expecting anything, but we got quite a few! Most of them were from the CT/New England area, but we did get a few from farther away.

Dead Rhetoric: For All My Earthly Days is the debut EP from the band- how do you believe the songwriting and recording sessions went for this effort? What particular challenges, obstacles, surprises, or learning experiences took place through the process?

Adams: I’ve been writing all the music and lyrics so far. While that went rather smooth, I haven’t been in a band in at least 5 years and this is my first time leading a band, so working with other musicians took a little getting used to. I think we are in a very good place now; everyone gets along great and we share an equal passion for the music. Dylan, Jess, and Cisco really make the parts their own, definitely improving on what is given to them.

Things were not working out with our former guitarist, so we let him go with only a few weeks until our scheduled recording session. We had been working on these songs for so long that we really didn’t want to reschedule our studio time. Luckily, Dylan (our then-bassist) also happened to be awesome at guitar, and he agreed to learn the songs in time for the studio. He has since moved to guitar and we will be working with a fill-in bassist for our first few shows.

Prior to this, we all had very limited studio experience. As a result, our initial estimates for how long everything would take were…off, to say the least. We didn’t end up recording everything we initially planned, but we recorded enough for our first EP and the songs came out fantastic. The whole thing was a great learning experience and we will be better prepared when we record again.

Dead Rhetoric: Do you work out in advance who is going to handle what verses/choruses between Sean and Jess- or is it a trial and error process? And what types of topics do you like to discuss within your storytelling lyrics?

Adams: The way the lyrics and music is written right now, who handles what for vocals is mostly worked out in advance, although as I said before, parts are tweaked and modified when we are rehearsing.

It feels more natural to me to inject whatever ideas/viewpoints I have into a story rather than writing standalone lyrics.

The EP is part of a bigger story, which will be told in full on our first album. The basic premise is as follows: in the aftermath of a cataclysmic nuclear war that wipes out a sizeable portion of human life, one gifted survivor creates a haven for other survivors. After years of maintaining this haven, his fear of death leads him to try to extend his life using an experimental technology. The machine warps his thought process and takes control of him, plunging his haven into dystopia.

The story puts a spin on the classic dystopian sci-fi story. It’s told mostly from the perspective of the “main villain”, the guy at the top who’s in control and pulling all the strings, and as I just said, it describes how he got to be that way. Kind of like that quote from The Dark Knight: ‘You either die a hero or live long enough to see yourself become the villain’.

Dead Rhetoric: Who came up with the cover art and logo – was it something that was a collaboration between the band and artist or did you give them free reign? How important do you believe artwork and imagery is to a band’s overall appeal – and what have been some of the more impressive works in metal that you love in the art realm?

Adams: The logo was done by Horst Type Foundry. I told him about what style Virus of Ideals was and sent him one of the rough demos of a song and he took it and ran with it. He had some great ideas and the one we went with fits the band perfectly: both graceful and aggressive.

The cover art was done by Manfish Inc. Kind of the same idea as the logo: we told the artist about our style and lyrics and had a couple vague ideas for an image and the artist came up with something awesome.

Imagery and art is definitely important. Would you want to wear a shirt for a band that had a Times New Roman logo and cheap art? That’s why we invested in a high quality logo and great album art. The album art is usually the first thing a potential fan sees when they stumble upon your music. Especially since bands make much more money on merch than music, you need to have a quality product that corresponds with your style of music. Elvenking is my favorite band in more ways than one. Their artwork is magical. Their first two album covers are good, but from their third album onward, they are really just beautiful pieces you can get lost in. I’d want the artwork from any of their 6 newest albums as a big textile flag hanging on my wall.

Dead Rhetoric: What are your thoughts on the metal scene locally – who impresses you the most and what changes (if any) do you think need to be made to make things even better?

Adams: While there aren’t a lot of places to play metal in Connecticut, the overall scene is definitely strong. Many bands and many fans hungry for local metal. As I’m sure you know, I love melody and I love the European influence, and it seems like those kinds of bands are more prevalent in Massachusetts, New Hampshire, and New York. Thunderforge is probably my favorite local-level band; they are triumphant power metal from Massachusetts and each member is insanely talented. Wandering Oak from MA and Arcaneum from Buffalo are two of the more interesting bands I’ve seen live recently.

I’d like to see more bands really try to make music that’s their own by taking risks and experimenting rather than sticking so close to their influences. 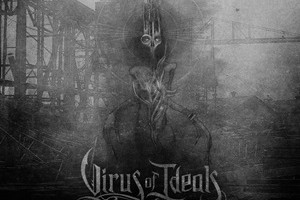