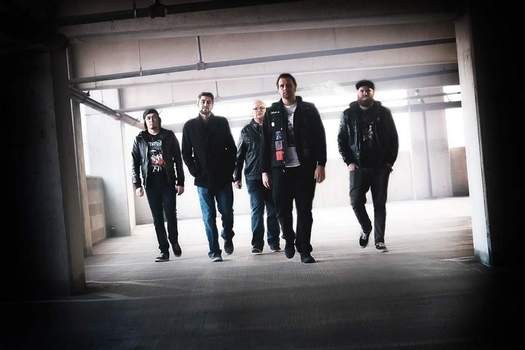 The definition of progressive metal has varied so much in modern times. What used to be easy to peg now includes everyone from the modern advances of Periphery, the technical brilliance of Animals As Leaders, or the wide-expansive experimental death nuances of Ne Obliviscaris. And while all for favoring the extension of parameters for the sake of better music, it’s also comforting to hear newer bands reach into the archives and give their own take on some older 80’s/90’s influences – which is where Utah’s Principium enters the conversation.

Featuring axe play that brings to mind classic Queensrÿche and Savatage, plus a power charge from those 80’s Maiden and Dio arena headlining days – along with the soaring, massive vocal kaleidoscope bringing it all home – A Crown of Ashes gives the listeners a solid perspective on this tried and true progressive metal template that isn’t going away anytime soon. So seeking to learn more about this band, we have answers from three members of the group: singer John Yelland as well guitarists Robby Pinelle and Mike Murphy. You’ll learn everything from their thoughts on technique versus feel in their genre, how they handle Principium’s workload while maintaining a living, and what the future looks like for the band.

Dead Rhetoric: Can you tell us about the formation of Principium – as from what I understand you’ve gone through a number of lineup shifts to get to this current lineup – any particular struggles in maintaining a solid outfit?

John Yelland: Casey and I were in a band called Disforia. He left Disforia in 2014 and formed Principium. Casey, Robby, and Mike were the triumvirate that led Principium through the inevitably tumultuous formation years. In 2016 Disforia went on hiatus and I joined Principium. Shortly thereafter Spencer Winward joined and it’s been nothing but pie ever since. Bands always seem to go through growing pains, particularly in their early years and when they start to become big, or when they start to lose steam. Luckily Principium has emerged from our first growing pains and blossomed into the sweet, little band we are today.

Dead Rhetoric: How did the recording sessions go for the debut EP A Crown of Ashes – any particular challenges or surprises come up, and how do you feel about the overall final product?

Robby Pinelle: I would say the overall recording process went pretty smooth and we are happy with the way it turned out. Christian Hanson is our go to guy and he makes it as painless as possible. The biggest challenge was trying to get everyone there at the same time. It was almost always one guy in the studio at a time. So it took a little longer than we would have liked. Other than that, we really enjoyed recording A Crown of Ashes and can’t wait to share it with everyone.

Dead Rhetoric: What are your thoughts on the Utah metal scene in general? I would imagine playing progressive metal, you have to expand your horizons and seek out a lot of feedback/support through social media channels… you must be familiar with the work of Katagory V and Visigoth for instance?

Yelland: Dustin (Mitchell) from Katagory V actually jammed with Casey and I a few times in our old band Disforia. He’s a tremendous guy, I really like and respect him. Likewise, the guys in Visigoth are about as genuine as you can get. They embody heavy metal in every way. Utah has a terrific metal scene. There’s always something brewing in these parts. We don’t really seek out feedback from anyone outside the band, but when it comes to social media we’re fairly active. We just completed a massive pre-order for the EP and it got a lot of positive response! We’re overwhelmed and promise the EP will blow you away.

Dead Rhetoric: What types of goals does the band set in the short term and long term? Would you love to be able to make a living from music, or do you think it’s an uphill climb given the fiscal climate for music support in general today?

Yelland: Our short term goals include fulfilling our EP pre-orders, promoting and playing our EP release show, and then opening for Nekrogoblikon and Alestorm in the fall. Beyond that, our longer term goals are to record our first full-length, which is already written, and send out EPK’s to management companies and record labels.

I think it goes without saying that every band would like to make music his or her living, but we all know it’s not likely. Making a living off music is extremely rigorous and unforgiving. I don’t know from experience, but I’ve talked with plenty of people who do live that life. I want it, with every fiber of my being, but I know it’s not likely. Realistically, I’d like us to reach a point where we can tour without losing money and have worldwide distribution.

Dead Rhetoric: What is the band’s stance on technique versus feel in progressive metal? Are you conscious of developing hooks and melody within your compositions? And where do you gain most of your lyrical concepts from – real world situations, personal experiences, or a combination of factors?

Mike Murphy: First and foremost, it has to feel right. Music is meant to build a connection to the audience; it has to be coherent. It is definitely fun to go flying up the neck of the guitar at Paul Gilbert speeds, but no one will care if that’s all you can do. That being said, you need technique to get your message heard the way you want it to be heard. I’m constantly building technique as a writer that would expand their vocabulary. Nothing can replace the right word.

When writing music, we definitely want it to be catchy. Just because we are defined as progressive doesn’t mean we have to be weird all the time. We love experimenting with song structure and time signatures, but we also love a good rock song. As far as being “conscious” about it, we really don’t think about it. John has a knack for catchy melodies in the lyrics and the music always seems to find the pocket. The content comes from whatever causes the inspiration. Two of the songs on the EP are fantasy driven, the other two are from real-life experiences, and I’m sure, later on, world events will make their way into the music. This band is very “anything goes” as long as we feel it’s good.

Dead Rhetoric: Who would you consider some of the benchmark acts you aspire to become in terms of professionalism, output, or just overall genuinely respect?

Yelland: Blind Guardian, for me. Their output has been extremely consistent in quality. Every album is different, yet has that trademark Blind Guardian sound. They’re professional and have tremendous work ethic. I also just finished reading ‘Get in the Van’ by Henry Rollins, so I’m currently fanning myself over the grueling work ethic Black Flag had. I always thought I was a hard worker. After finishing that book, I realized I didn’t know a damn thing.

Dead Rhetoric: Where do you see the major differences between Principium in the studio versus live performances?

Pinelle: In my opinion, I think we are a lot tighter live than in the studio. But that doesn’t mean we aren’t tight in the studio. I just think our stage presence really makes us stand out.

Dead Rhetoric: What do you consider the 5 best progressive metal albums of all time, and possibly one underrated gem that everyone needs to dig out and give a deeper listen to?

John Yelland:
Into the Electric Castle – Ayreon
At the Edge of Time – Blind Guardian
Operation: Mindcrime – Queensryche
Crack the Skye – Mastodon
A Matter of Life and Death – Iron Maiden

Dead Rhetoric: What’s on the horizon for the next 12 months for Principium as far as promotion, shows, videos (will you film one for one of the EP songs)? Has work already begun songwriting-wise on the follow up, and if so are you expanding upon the foundation already put forth or is the band satisfied with the direction of A Crown of Ashes?

Yelland: We’re close to announcing a distribution deal for the EP A Crown of Ashes. After that we’ll begin sending out packages to those who participated in the pre-order. Our EP release show is on September 3 at the Metro Bar in Salt Lake City. We will also be playing with Alestorm and Nekrogoblikon on October 15.

We have all the material written for our first full-length album. We’re going to be keeping our classic metal tinge, but going a little further into prog territory. We’re going to be striking a good balance between short, catchy songs, and longer more adventurous songs. We will likely begin the recording process for this album in 2017. 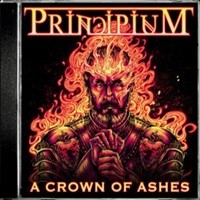