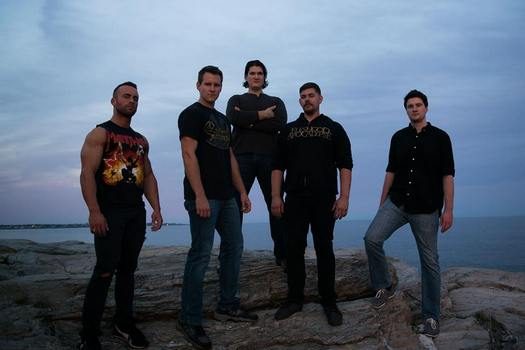 Appearing on my radar screen from fellow DR scribe Matt Bower, Goldenhall is a Rhode Island quintet have an interesting mix of symphonic power metal with classic and extreme death nuances on their debut four song, self-titled EP release. Beyond the natural layers of guitars and keyboards plus melodic/ harmony elements galore, you have a classically trained baritone vocalist that isn’t of the norm for most American outfits (think Falconer for sure in this department). Goldenhall provides another case for taking a host of European metal influences that infiltrate these musicians’ creative instincts, and feeling the need to forge ahead with their own songwriting desires, which results in emotionally breathtaking aural constructs – taking us away to ancient Tolkien visions of grandeur.

Heeding the call to learn more about this young outfit, Ryan and Jason would answer these questions – and prepare for another outstanding New England group to make their mark on the international landscape.

Dead Rhetoric: Tell us about the formation of Goldenhall in the fall of 2014- as you all came from different New England bands previously. Did you know straight away the type of symphonic power metal you wanted to play, or did it develop as a result of rehearsals and songwriting sessions? And how did you come up with the name Goldenhall?

Ryan Spahr: This band initially started as a solo project, with instrumentals that I had written and demoed with no real plan as to what would be done with them. I knew from the start that I wanted to include a symphonic element to the music, as I thoroughly enjoy the sound and the impact that it can have on the arrangement as a whole. I’ve wanted to try orchestral composition for a long time, and this was my first attempt at using those sounds and incorporating them into the full band arrangement.

The band came together when Nico had gotten in touch with me wanting to get a band started up again. Our previous bands had performed several times together back in 2010-2011, but by the fall of 2014 hadn’t been active for a couple of years. Nico had known Matt from playing together with one of his previous bands as well. Jason was brought into this project by Nico, who is a co-worker of his. Nico had heard from a colleague that Jason (who was in the middle of singing in an opera at the time) sang on stage, and he had a crazy idea that Jason would be perfect for the band – he was right!

Regarding the band name – this is something that didn’t come easily. The fact that it wasn’t already taken by another band (as far as we’re aware) was a major plus! I think it fits the sound, and we’re happy with it.

Dead Rhetoric: You recently released your self-titled EP. Tell us about the recording and songwriting sessions for this – what challenges or surprises took place and how do you feel about the overall final product?

Spahr: This EP is truly a product of a home studio environment. I wrote and demoed the instrumental versions of all of the tracks at home in my small project studio. Once each track was done, that got sent out to everyone to listen to, learn, and for Jason to write and demo vocal tracks with. We’d have some back and forth regarding lyrics and melodies, and then each song would be considered complete.

We had all aspects of all songs written before we decided to go into “recording-mode” for the EP. As I mentioned before, this is truly a home studio recording: drums were recorded in Greg’s living room, rhythm guitars in his home office, lead guitars and bass guitar recorded in my bedroom, and vocals recorded in Greg’s and Nico’s basements. Not necessarily ideal recording environments, but they seemed to get the job done. The EP was mixed and mastered in my bedroom… far from the ideal environment for that.

The biggest challenges, in my mind, just related to scheduling and finding the right times to get the right people in the same place. Overcoming environmental setbacks while recording and working on the mix/master was another challenge. Overall, I’m very happy with the way that the EP has turned out. In all honesty, I still come across little things that I’d like to change about the mix/master, but if a deadline wasn’t set, I’d be tweaking away and these tracks would sit on my computer for another 6 months (which doesn’t do anybody any good!). This has been a great learning experience for me personally and as a member of the band, and hopefully the next batch of songs will only be easier to produce and sound even better.

Dead Rhetoric: How did the band come about incorporating a lot of sub-genre melding such as melodic death and extreme blast beats into this symphonic power metal template – was it a process to figure out how to make things work? Also, you have a very unique vocalist in Jason Shealy who displays more of a baritone delivery – did this worry you or do you feel it’s another marker for band distinction to embrace?

Spahr: I really don’t think about sticking to any one particular genre or sound in general. I have many musical influences, and they’ll all seem to find their way into the music in one form or another. Using blast beats in certain sections just felt like the right fit for those sections.

While I can appreciate the use of labels and subgenre tags for describing music to others in order to generalize a sound, I also feel that approaching the writing process with those same ideas in mind can hinder creative output. Going into it with the mindset that “we’re of a particular subgenre” only creates expectations and constraints to remain within; I’d prefer to not have to pay attention to any of that and just do what comes naturally.

Jason’s vocal style fits the band. We don’t worry even a little bit about it. Similar to what I had mentioned above, if listeners are put off by a baritone delivery it’s likely because it doesn’t meet an expectation that they had for what the music should sound like (and that’s perfectly fine). It’s definitely one of the more unique aspects of the band’s sound, and we embrace it and will take advantage of it going forward.

Dead Rhetoric: Par Olofsson did the cover art – he’s more known for heavier melodic/extreme death work by acts like Exodus and Solution .45. How did you secure his services, and was this a collaboration between the band and Par or did you give him free reign to come up with something on his own?

Jason Shealy: That was really a very happy accident. Nico emailed Par and expressed interest in that piece, which was on his website but appeared not to be associated with anything. We found out that it was a work which had been commissioned, but not used, and Par agreed to sell it to us. It was a really great example of what the internet can do for independent bands. Par had art, we needed art, we contacted Par and bought his art. It was remarkably simple in that regard.

If we’re able to grow our presence and online following, it may be possible that we’ll commission something from him based on this first round of artwork, to keep our visual themes consistent. It’d be great to continue working with him as a sort of Roger Dean or Hugh Syme.

Dead Rhetoric: You’ve chosen to release the EP for free through Bandcamp. Do you believe it’s more important at this stage in Goldenhall’s career development to obtain followers and true fans through whatever means necessary, and that sales will follow down the line? What are your thoughts on social media promotion for independent, unsigned bands like yourselves in the current metal scene?

Shealy: Selling music through Bandcamp is a little more involved than it may seem, especially for a new band which does not yet have a fully formed presence. Obviously, we want to sell our music and merchandise, and as we grow as an organization, we’ll pursue those ideas more fully. Right now, we aren’t doing this for the money, so getting the music out there is the main priority. Once we get to a point where we know we have an audience of people who would support us financially, we’ll figure out the best way to enable that. Having said that, social media has entirely made it possible for us to do what we’ve done. Social media helped us find Par Olofsson, it got us in touch with our community the way an underground fanzine would have in the 80s, and it enabled us to propel our music out to people around the world! This kind of thing would have been entirely impossible for a little 4-song EP from a new band, even 10 years ago.

Dead Rhetoric: Do you believe you have an uphill climb ahead of you establishing yourselves in a Rhode Island/ New England scene that has been more well known for other genres of metal (metalcore especially) whereas the style that Goldenhall current plays seems to have more established influences and roots of a European descent?

Spahr: Quite the contrary, actually. I think the question you might be trying to get at is, “Is there a market for your style of music here?”. We’ll see how it goes, but reactions we’ve received thus far have been overwhelmingly positive both from metal fans and non-metal fans alike. Will our music be everyone’s cup of tea? Almost certainly not, but it’s my opinion that having musical diversity in the local scene only brings good things to the table.

In terms of establishing ourselves, it will probably be easier to do so playing the style we do (i.e. different from a majority of the other local bands), rather than “fitting in” and having to find some way to stand out amongst the sound the scene is more well known for. Since there aren’t many other symphonic baritone-fronted bands around locally, we’ve got somewhat of our own niche from the get-go. 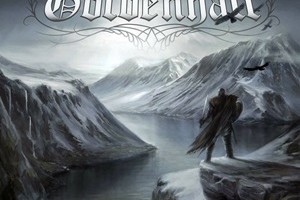