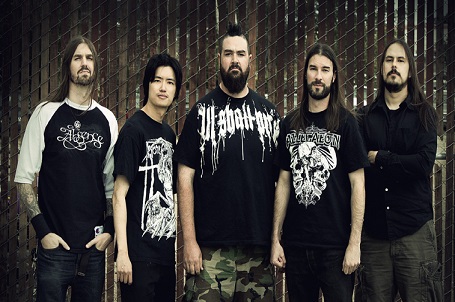 Coming from humble beginnings, vocalist Ryan Conner first posted an ad on a musicians bulletin board back in 2003 and met with Brian Sawyer to form the heart of Cryogen. The band has since plugged along, and the recently released Continuum is the sixth release from the Rocky Mountain metallers. In regards to how it compares with their previous material, Sawyer responds, “For Continuum, we really focused on writing a cohesive album that would stand up to multiple listens. That meant boiling the song ideas down to the core of what we wanted them to say, and removing any superfluous parts so that the listener doesn’t get distracted. At the same time, we tried to vary the material throughout the album to represent all the elements we’ve touched on in past albums (grind, thrash, melodic and technical death metal).”

Another piece brought to the table for Continuum was the addition of Allegaeon guitarist Greg Burgress, whom Sawyer adds, “Came in with really strong ideas that eventually became ‘Nucleosynthesis’ and ‘Rama II.’  He also wrote the main black metal sounding parts to ‘Synthetic Essence,’ so he definitely had major contributions to the writing process. I would definitely say that bringing Greg into the fold has given us a boost.” A boost also in the sense that “[Cryogen is] primarily a regional band, so having someone with a wider audience never hurts, but I think more than that, just having another strong songwriter helped us round out the album with the tracks I mentioned.”

As a regional band, the amount of money needed to fund a professional sounding, full-length release doesn’t come easy. For Continuum to reach the levels that the band hoped for, they asked their fans for help through a Kickstarter campaign. Conner states, “I think Kickstarter and Indiegogo have gotten a bad rap because of all these more “well known” bands asking for far more than they need. We did ask for a pretty modest amount compared to a lot of bands I’ve seen run crowd funding campaigns, however, in my personal opinion, it doesn’t take 25K to record and release decent album nowadays. It’s not the 90’s any longer, with all the high quality studios popping up in dudes’ basements, the days of needing to visit a top studio to get a decent sound are over. I should know, I run a basement studio of my own.”

The band asked for a mere $1500 to cover expenses and provided very reasonable pledging rewards and successfully reached their goal. Connor adds, “As far as I’m concerned, it helped us get the album out period, and we are extremely thankful for all of the awesome contributors who helped us with that.”

One goal that Cryogen had in mind for Continuum was an increased level of orchestration with the songs. With their previous effort, 2009’s Despara, they saw the beginnings with the track “Mirror Entropy.” Connor explains, “Our drummer at the time, Aaron, was a concert violinist, so we wanted to incorporate some of his violin stuff into that record. After it came out, people seemed to like it, so we decided the next album we did would feature more classical based parts. We parted ways with Aaron shortly after Despara was released, however, we still wanted to add classical instrumentation for the new album.” Without Aaron, the band began to write the parts themselves, but were contacted by Joe Farris through the band’s Kickstarter campaign. “He really knows his stuff. If you’re in a band and are looking for realistic sounding string parts for your album look that dude up!”

With a name like Cryogen and the stunning artwork by Colin Marks, it’s clear the band has a knack for science fiction. Two tracks, “Rama I and II” are based on the writings of Arthur C. Clarke. Sawyer states that “The band actually has two Ph.D. physicists (Mark and Brian), so science themes come naturally. In the past, we’ve focused on more internal concepts, but Ryan was a big proponent of bringing in science and sci-fi themes on this record, and it has worked out well as a full-album concept.” Connor also adds, “I have to watch every new sci-fi show or movie that comes out, haha. Most of the books I own are also mostly sci-fi from the classic writers, Arthur C Clarke, Isaac Asimov, Frank Herbert, etc. I’m a huge sci-fi nerd pretty much. I’m actually surprised it took me this long to write sci-fi based lyrics.”

With influences ranging from early In Flames, Amon Amarth, and Carcass to bands like Slayer, Morbid Angel, and Decapitated, the band has been pigeon-holed into the love-it or hate-it staple of melodic death. A tag, that in 2013, can unfortunately bring a jaded connotation of a metal genre many have considered stagnant and dead for a while. Sawyer urges potential listeners to give the band a well-deserved chance. “I would be inclined to agree that ‘pure’ melodic death metal is a dead genre as far as general interest. I’m speaking specifically about the old-school (Whoracle) In Flames or (Slaugher of the Soul) At the Gates-era material. Even those bands have moved on from the initial sounds they helped develop. Cryogen is similar in that we share those early influences, but if you listen objectively I think you’d be hard-pressed to say we play pure melodic death metal. Our members listen to a huge range of material, and depending on the song off Continuum, you might hear traces of Meshuggah, Fear Factory, In Flames, Morbid Angel, or Emperor, just to name a few strong influences.”

Connor also provides some added insight, “When Brian and I first started the band back in 2004, the general consensus was that melodic death was pretty much dead, even back then. I think we just said fuck it and decided to write melo-death based stuff since we’re just big fans of it. I don’t think it’s ever really died out either; it’s just evolved like Brian said. I would even say that a lot of individual tracks of ours stray pretty far from melo-death, honestly. Plus, nowadays, you have bands like Insomnium, Swallow the Sun, among tons of others, who are writing new melodic death type stuff that’s going over really well with people. Sure, it may not be the most popular form of metal today (or ever for that matter), but I couldn’t see us writing anything else. Its just part of what the band has always been.”

With Continuum successfully released to the masses, the band has some hopes to get some touring in. Connor wraps, “We’d love to get out on the road a bit in support of the album. Greg is out touring with Allegaeon this month, so it’ll have to wait until after he gets back next year sometime, but we’re going to try and make that happen if we can. Oh, and check out Allegaeon if they come through your town; you won’t be disappointed. Also mention you’ve heard of Cryogen to Greg and he’ll be extra stoked.” Perhaps an Allegaeon/Cryogen tour should be somewhere in that pipeline as well! 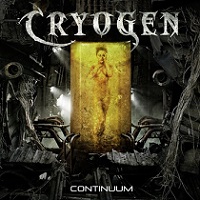