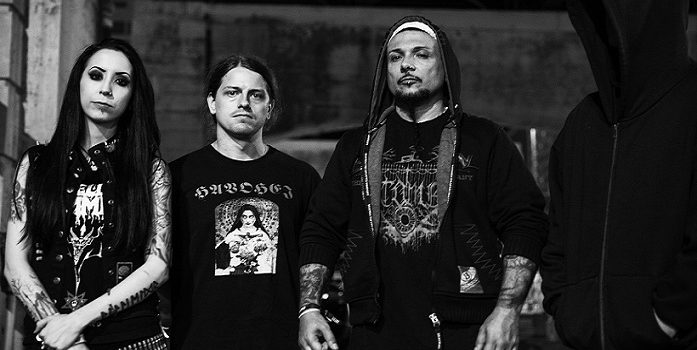 In this month’s installment of Rapid Fires, we review a band from Oregon by the name of Nekro Drunkz. In favor of song titles such as “Puss Blood Buffet,” “College Co-Eds Pooping,” and “Tongue in the Toilet,” Nekro Drunkz are perhaps worthy of an entire feature regarding their thought process. Inquiring minds want to know, but may not want to find out how two grown men take the time to come up with song titles that only a 9-year-old would love. There’s no accounting for taste. Alas, here they are, along with Apollo, Black Cilice, Dark Portrait, Darkest Sins, Eden’s Curse, Eternal Deformity, Foray Between Ocean, Golden Rusk, Harrow, Heart Avail, Hobbs’ Angel of Death, Painted in Exile, T.O.M.B. (pictured), and Tyron. 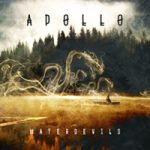 Apollo – Devilswater (Escape Music)
Current Spiritual Beggars/ex-Firewind vocalist Apollo Papathanasio has established his bluesy, expansive abilities for decades – so it’s only natural that a solo venture finally hit the marketplace. Expect 12 songs more in the early Whitesnake vein as far as blues-based melodic hard rock – Apollo venturing into David Coverdale range and textures on “Buried in a Flame”, while Europe-oriented harmonies and mid-tempo riffs bring “I Need Rock ‘n Roll” to mind. Solid fare here, hard to argue the quality based on Apollo’s natural gritty, emotional delivery that is certainly a throwback to the 70’s and early 80’s. Whets aural appetites for his next metal record. – Matt Coe (Apollo Papathanasio on Facebook) 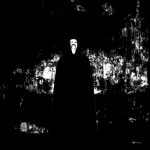 Black Cilice – Nocturnal Mysticism (Iron Bonehead)
Whatever the lowest rung of black metal production is, Black Cilice are looking for it. The band’s previous Summoning the Night and Mysteries albums subscribed to low-fi standards, helping push the raw BM envelope a bit too much, something that’s carried forth on the two-song Nocturnal Mysticism EP. While wind-tunnel, dis-harmonic riffing forces the pace, a clanky, highly suspect drum sound throws the whole mix for a loop. Then again, if you gaze long enough into these songs, they’ll gaze right back at you. – David E. Gehlke (Black Cilice Facebook) 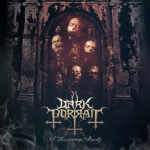 Dark Portrait – A Harrowing Atrocity (Xperiment XIII)
If A Harrowing Atrocity was released in 1999, then it would be gangbusters. Unfortunately for Greece’s Dark Portrait, it’s not, and symphonic black metal’s status remains as disputed as ever. However, if one is going to look for the literal interpretation of the sound from Dimmu-esque extremity to Cradle-esque banshee wails and female screams, then Dark Portrait ably fits the bill. Really, there’s a lot of aping going on here, probably a bit too much for some, but, Dark Portrait at least show symphonic black metal has some relative staying power, no matter how much the true black metal front provides opposition. – David E. Gehlke (Dark Portrait Facebook) 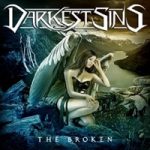 Darkest Sins – The Broken (Pride & Joy Music)
Seven years in and a self-financed demo and EP under their belts, Norwegian act Darkest Sins sign with Pride & Joy Music (a German label) to release their debut album The Broken. A melodic metal band, epic tracks bookend the direct fare – giving “The Broken” and 11:39 “Far Away” more dramatic openness and flair for sophisticated power harmony interplay. Dual female/male vocals also allow for entertaining contrasts and chorus compliments. A lot of Helloween meets Judas Priest and Evergrey comparisons come to mind on the rhythmic “Domineer”, while uplifting chord choices could make “Rough Love” a crowd favorite. Guests vocals and guitar solos on specific tracks from Fabio Lione and Jimmy Hedlund of Falconer aside, Darkest Sins biggest deterrent to full enjoyment lies in the weaker, semi-moan delivery of Anniken Rasmussen – you just want her to belt things out a little more as the riffs and arrangements deserve it. – Matt Coe (Darkest Sins on Facebook) 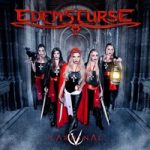 Eden’s Curse – Cardinal (AFM Records)
Hailing from Scotland, Germany, Serbia, and Finland, Eden’s Curse truly embody an all-encompassing multinational melodic metal platform for album five Cardinal. Very Euro-tastic in terms of larger than life vocal harmonies, a fairly gritty guitar tone, and the solid groove/hook combinations that make “The Great Pretender” and “This Is Your Moment” future anthems for the faithful who love Jaded Heart, Pink Cream 69, and Pretty Maids. Two years in the making, the occasional progressive variance in longer songs like “Find My Way” and the Rainbow/Dio-esque “Jericho” give Eden’s Curse dynamic versatility on an hour-long record. Probably gain small faction appeal in North America (the eye candy cover helps) in comparison to the European/Far Eastern legions who eat this up 24/7. – Matt Coe (Eden’s Curse official website) 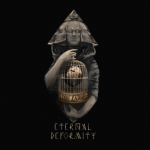 Eternal Deformity – No Way Out (Temple of Torturous)
Don’t be tricked by the name – Poland’s Eternal Deformity are certifiably not a brutal death metal band with the usual (and predictable) array of gore-soaked lyrics. Thank goodness for that. What they are is a progressive, able-bodied unit capable of writing expansive extreme jaunts with cutting melodies, dominant keys (“Sweet Isolation” is the jam), and tricky song structures, the most notable being “Mimes, Ghouls, and Kings.” No Way Out (which happens to be their sixth full-length) is a real trip, out-sizing many of the norms and restrictions often placed on Polish extreme metal. – David E. Gehlke (Eternal Deformity Facebook) 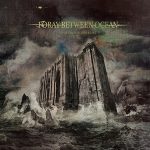 Foray Between Ocean – Depression Neverending (Prime Eon Media Ltd.)
Technical death metal, melodic death metal, atmosphere, and symphonic landscapes all make their contribution to Foray Between Ocean’s Depression Neverending. There’s crushing modern groove, powerful growls (and some well-done clean vocals that are used in effective positions), intriguing melodic solos, and no shortage of occasionally intricate but always compelling riffs with plenty of death metal bite. It seems like a wide swath of influences and sounds, and it is – but it’s still a coherent listen with a defined destination despite it all. Fans from Gojira to Raunchy to Fallujah and beyond should find some aspect of Foray Between Ocean to be worth scoping out. – Kyle McGinn (Foray Between Ocean on Facebook) 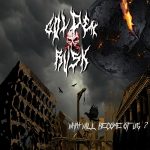 Golden Rusk – What Will Become of Us? (Self-Released)
A conglomerate of death metal with helpings of thrash and industrial influences, Golden Rusk portrays a bleak sound. What Will Become of Us is the work of one man, Mahar, and the overall approach is more backed by modern death metal than the old. The industrial feel compliments the guitars, giving it a darker tone and increasing the heavy vibe and massive grooves. Unfortunately it does cause it to blur together at a few points, but that’s not a deal breaker by any means. It may not rewrite the death metal books, but the riffing is solid, as is the industrial/thrash fusion, for those in need of a new death metal band in their life. – Kyle McGinn (Golden Rusk on Facebook) 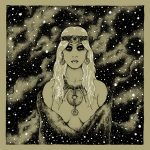 Harrow – Fragments of a Fallen Star (Hypnotic Dirge)
When it comes to atmospheric/Cascadian black metal, Hypnotic Dirge is usually a good reference point for finding bands below the radar. The statement holds true for that of Harrow, whose 2013 release Fragments of a Fallen Star is getting the CD treatment for the first time. Stylistically fitting in with bands like Wolves in the Throne Room and Agalloch, Harrow blend together a naturalist, folky approach with more caustic black metal that’s recorded in a fittingly low-fi output. It doesn’t stray too far off the beaten path, but has a ritualistic sense that gives it more of an individual identity. We’ll see where the future takes them from here, considering Fragments is three years old. – Kyle McGinn (Harrow on Facebook) 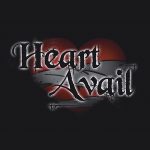 Heart Avail – Heart Avail (Self-Released)
Washington-based symphonic metal/rock act Heart Avail offer up plenty of soaring melodies on their self-titled EP. In some ways, it feels like a heavier version of Evanescence as “Broken Fairytale” hits the speakers. Some tracks (like “Broken Fairytale”) use more symphonic elements, whereas “No Remorse” or “Vacillation” are more direct in their rock/metal approach. The five song EP hits a number of familiar features for the style, which seems to paint the band into a corner. They’ve got some potential in terms of their songwriting (there’s some solid hooks here), but some movement outside of the box will help out in the long-run as they attempt to make a larger name for themselves. – Kyle McGinn (Heart Avail on Facebook) 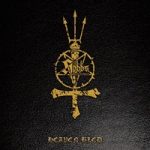 Hobbs’ Angel of Death – Heaven Bled (Hells Headbangers)
Another 80’s cult thrash band that’s enjoying the fruits of the genre’s resurgence, Hobbs’ Angel of Death even hit North American shores for a club tour this year. Heaven Bled as the third album contains the attitude and pummeling spirit of Peter Hobbs at the helm, making the double bass mid-tempo fueled “Suicide” and “Sadistic Domination” terror driven affairs that long-timers love. The digital-oriented production squashes the kick drum tone a touch, but overall the twelve cuts induce blunt force trauma to insure pit swirling antics. Imagine Canadian swagger and Teutonic rage and you get the gist of Hobbs’ Angel of Death in a nutshell – even if they are Australian. – Matt Coe (Hobbs’ Angel of Death on Facebook) 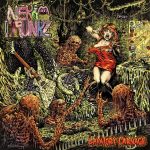 Nekro Drunkz – Lavatory Carnage (Moribund)
Really stupid stuff, but that’s sort of the point, Nekro Drunkz are a death/grind ensemble from the lovely state otherwise known as Oregon. Their songs on Lavatory Carnage are pretty effortless and without thought, although they manage to whip up a semi-potent grind slosh, like on “Interred in Turd” and the vintage DM offerings of “Kaustik Kum.” But, the real grabber will be the song titles: “Gangrene Gang Bang,” “Asshole Casserole” (the best of the bunch) and “Aroused by Menstrual Stench.” How and why the lads in Nekro Drunkz found the time to come up with such titles is anyone’s guess, so laugh it up while you can – these songs are short anyway. – David E. Gehlke (Nekro Drunkz Facebook) 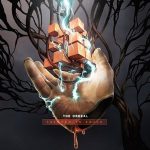 Painted in Exile – The Ordeal (Self-Released)
Seemingly a new example to look at when talking about trying to pack too much stuff into one album, The Ordeal succeeds far more in ambition than it does in execution. Akin to earlier Between the Buried & Me albums where they attempted to simply toss riffs together with no coherent rhyme or reason, the way Painted in Exile randomly jumps from deathcore to jazz to progressive to…you name it, is ultimately it’s downfall. There’s clear musical ability in what they do, but the songs are so sporadic that it feels like nothing more than a barrage of riffs randomly collected and put together by a computer. Some dreamy atmospheric moments in “Jupiter” can’t save what’s otherwise a disorienting stream of tracks that aren’t quite sure what to make of themselves. – Kyle McGinn (Painted in Exile on Facebook) 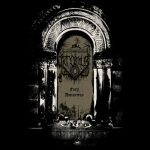 T.O.M.B. – Fury Nocturnus (Peaceville)
Peaceville doesn’t sign very many bands, so when they do, it’s just cause to take notice. T.O.M.B. (that would be “Total Occultic Mechanical Blasphemy”) are far from the epic and/or depressive doom sounds usually emanating from the label, opting for an industrialized, noise-based sound. There ambience created on Fury Nocturnus cannot be mistaken, as distorted samples, harsh vocals, and tribal drums create what best could be described as an “ear-fuck” (pardon our French). Plus, legendary Mayhem skin-basher Hellhammer has gotten in on the action. Just don’t expect any extreme metal drumming. This, is a different kind of extreme. – David E. Gehlke (T.O.M.B. Facebook) 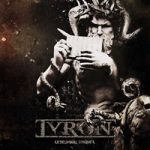 Tyron – Rebels Shall Conquer (Iron Shield Records)
Combining typhoon and iron to create Tyron from their original Lilith Laying Down moniker, this four-piece has an old-school thrash with progressive stance on Rebels Shall Conquer, their latest album. Frantic lead play and tribal-oriented drumming makes “From Prey to Predator” an early favorite, the rhythmic verse-work from vocalist/guitarist Pavlos Batziakas channeling a deeper Hetfield-ish persona. Stop/start guitar to rhythm section interplay keeps “Sick of It All” front of mind – as their sound channels mid-tempo Metallica, pieces of Iced Earth, and a touch of pure finesse and angst. Nice twin guitar harmonies sprinkled throughout, Tyron are proficient at their instruments, delivering a slightly advanced thrash punch that should appease those tired of Bay Area wannabes. – Matt Coe (Tyron on Facebook)