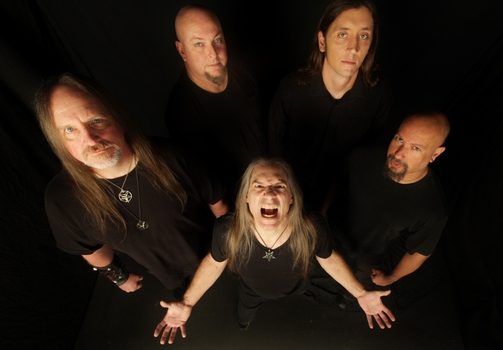 Dead Rhetoric: Keeping with the sci-fi aspect, what are your thoughts on the A.I. death metal songwriting that was accomplished with using Archspire songs?

Browning: I find it pretty interesting actually. I kind of wish that they would have thrown more than just Archspire into it. I have listened to this and I keep coming back, since it is true A.I. and they aren’t just loading up samples of songs and I have noticed that the first few weeks that it was running, as they have been doing it 24 hours a day, and it will keep running. If you have noticed, it has actually started writing better parts. Two weeks ago it was jumbled up craziness. Last week there was almost some structure to it. Every few days, you can hear more structure to it.

Dead Rhetoric: It will be interesting to see where it continues to go, even beyond now.

Dead Rhetoric: You touched on this a little bit earlier, but in terms of drumming – what do you see as the evolution in drumming in extreme metal?

Browning: It’s just gotten insane! I could never play what some of these people are playing, and I wouldn’t want to work that hard to do it! I understand people wanting to play faster, but man, when you start to get up near 300 bpm, that’s just insanity! Some of the stuff goes so fast, it all starts to sound the same to me. There are only a couple ways to play a blast beat. All you can do is really work on it and play it faster. When I played drums, I was taught that drummers hit the drums. Players like Bonham and Keith Moon – you beat the shit out of your drums. That’s what you do. A lot of these drummers play super fast, and they are amazing. They are way faster than me. But they barely hit their drums. They are tapping everything. They don’t even break a sweat when they play. It’s crazy when they do it, but they aren’t putting any intensity into it.

Some drummers do – you have people like [Derek] Roddy that play that fast, with the intensity in it. But many don’t, especially your newer drummers. They have a whole different style of doing things. They learned from just ‘fast’ and they don’t know anything else. I put in some very regular beats. There’s even a couple Led Zeppelin type beats, there’s some blast beats, and some Slayer type beats. I mix it up as much as I can, even with strange timings and beats. I don’t want to have an album where 90% is blasting. It has been doing a million times, and it’s great for anyone who has done it, but it has never been my style of drumming. While everyone wanted to go faster, it’s not that I wanted to go slower, I just wanted to do my own thing.

Dead Rhetoric: Going back to the competition thing, how do we get away from the ‘who can play the fastest’ type of thing and competing like that, or is it that everything is so large now that it is inevitable?

Browning: It’s kind of inevitable in a way [laughs], but it would be nice to be able to tear down the walls of those subgenres of metal that have been built up. But unfortunately I don’t see that happening. There are too many bands that are separated. Some people will never listen to black metal that listen to death metal, and some people who listen to black metal will never listen to death metal. No matter what. When I was growing up, it was just metal. You gave everything a chance. If there was something about it that you liked, you supported them. If there wasn’t though, you didn’t hate on them. You just didn’t support them.

Nowadays, people like to hate on things. That’s one thing that I was thinking of. I am going to put out this album and it’s going to be compared to The Key, which was very original and was a product of its time more than anything. It hadn’t been done at the time. At the time, we were one of the only bands doing anything with keyboards with death metal, much less putting them through the whole song. Now, it’s pretty much a normal thing. You don’t even think about it. There are so many symphonic metal bands out there. It’s insane. But a lot of them aren’t death metal still. Most symphonic bands are either power metal, straight up metal, or black metal.

Dead Rhetoric: I think too, with that sound you have established, with Paradox it still has a more unique feel to it. It’s not a feeling that you usually hear with death metal bands, even if they have keys. Most bands of that type tend to use them has a small enhancement.

Browning: I worked with our producer, Jarrett Pritchard, and he has been a friend of mine for a long time. We were friends back in the ‘90s. He has lived in Tampa for a while and played in a band called Eulogy. We lived in the same apartment building back then, so I knew him as a guitar player then, and he moved into running sound and engineering and he became huge doing that. He’s done bands like 1349, Goatwhore, Lecherous Nocturne, and now he’s doing Triptykon. He has some of the best bands out there, and they have some of the best sound live. They have great live shows and a lot of it has to do with him too. He’s just a great engineer and producer.

He has a fantastic ear, and he grew up watching Nocturnus play. Their band practiced at the same place we did. He would watch us practice and knows what we are about. He saw us back in the day, writing, and playing live back then. I knew he was perfect to get the sound we needed, because he saw it back then. He’s not just someone who heard the album, he was actually there in that era. That, to me, made a great difference. I think that’s why so many people like Jarrett because he is able to get that old sound if you want it. A lot of producers don’t understand how to do that.

Dead Rhetoric: There’s always something to be said for someone who was physically present, and not just taking an influence from something.

Browning: Right – it’s like if you have a newer producer who hasn’t done something like this before. You can explain it to them, but they weren’t there and they don’t understand it the same way. He knew what we had to have in there, and also knew we wanted some new elements. He also knew that we needed a perfect balance of old and new elements where people can hear the older stuff but hearing some new stuff that is a little different. It keeps us from being stuck in the old thing while knocking us out into all new [sounds]. I didn’t want to go backwards.

The Key was very raw sounding and didn’t sound like most Morrisound recordings. I wanted that raw feeling for Paradox, but I wanted to be able to hear things a little better. A lot of the mix suffered with The Key due to inexperience, bad bass playing, some of my bad drumming – we were really young back then. You know what you can improve upon and make things better. I wanted to change those things and make it better while keeping the old sound there.

Dead Rhetoric: What else is the band up to this year?

Browning: We head to Santiago, Chile on the 14th of June. Two weeks after that, we have a show in Texas called Destroying Texas Fest. Massacre is even on that one, along with Master. It’s going to be a really good fest. We have been lucky to get on the small and bigger fests. Some of these smaller fests have had some really good bands on them. It’s been cool because mostly what we try to do, since it’s hard to tour due to age and it’s been a while since we have toured. There’s not enough money to keep doing that forever. We have jobs and whatever. So we try to get the best shows we can, and these fests are what fit.

If a band tours and they aren’t a huge band – they do a club tour. 80% of people already know the band. If you do a 20 show tour, and 80% is people that have seen you before, you aren’t doing a whole lot. You are playing for those who want to see you, but when you play a festival, people can still come who want to see you, and it’s only about 20% that know you. You can gain a lot more fans than if you just do a 20 date tour.

Plus, some bands you get to see a lot. You don’t get to see King Diamond very often, so you always want to go see him. But if he played every Friday night, after about two years, you probably aren’t going to keep coming out. It doesn’t matter who it is. There would be very few bands that you would go and see if you saw them for two years once a week. That’s an extreme limit, but some bands tour all the time. I understand it because that’s their job. They have to make a living at it. To me, the crux of music, is that if you aren’t selling millions of records, you have to work your ass off to make a living. You have to play a lot. If you are on this level, and you can’t move up, it’s like spinning your wheels at some point. You play to the same people over and over again. By the 10th time you do it, they are going to start wondering if they need to see that band anymore.

Slayer is playing tomorrow night, and I’ve seen them 5 times…mostly with Dave Lombardo. A lot of people are going, but I am probably not going to go, because half the band isn’t Slayer anymore. Things happen, but to me, I have seen them enough that I don’t feel I need to go again. I don’t want to become that band. Even locally, we only play 2-3 shows a year. Some bands think that playing locally is going to get you somewhere, and play 20-30 shows a year in their hometown! It’ doesn’t matter how good you are at that point, you could be fantastic, but after someone sees you that many times, 90% of your audience has had enough. You have some extreme fans, but even some of them would die off after a year [laughs]. I like the fact that we play a limited amount of shows. It makes them feel more special.

But I do understand that people who are trying to make a living that have to do it – record sales aren’t going to support 5 people’s salary for a year. For 40-50 grand a year times 5 people for a year. No band makes 200,000 dollars a year unless it’s someone like Slayer or King Diamond. Someone really big. It’s difficult. You have thousands of bands out there, and only a handful can make a living off of it. That’s just reality, and that’s where I live [laughs]. So I try to play shows like a sniper. Those one-shot things that really make a difference. Instead of 50 shows for 50 people, you can play a show with a few thousand people and many people probably haven’t seen us yet. You get a chance to really get exposure to more people. 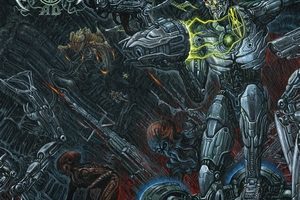