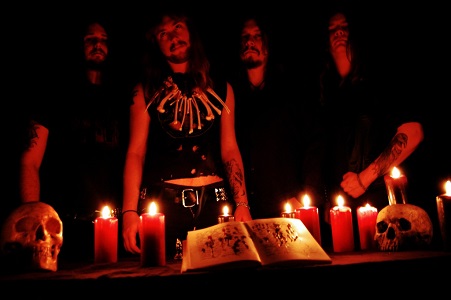 Even though it’s unlikely various record company headhunters (if there are any left) will be stationed in the friendly confines of Uppsala, Sweden, the city deserves credit for shifting attention away from the normal areas of focus: Gothenburg and Stockholm. The two main 2013 high-flyers in 2013 have been Watain’s The Wild Hunt and In Solitude’s Sister, but a peak and crack away are occult metallers Noctum. The band’s sophomore Final Sacrifice (Metal Blade) has found the go-between of 70s rock and vintage 80s metal stylings, thus, making a stated improvement from their 2010 Séance debut, just reference to eerie swivel of “Temple of the Living Dead” and “Void of Emptiness.” This is simply a ripe take on the blown-up 70’s retro rock sound, performed with a devilish Mercyful Fate-on-NWOBHM twist, one that gets better with each listen.

“Back then we had a porta-studio at a friend’s house and recorded the whole album in his apartment except for the drums that we recorded in the rehearsal space,” begins bassist Tobias Rosen when asked about the differences between the recording process for Seance and Final Sacrifice. “Everything was done within 24 studio hours, so we really rushed that one compared to Final Sacrifice. This time around we had around two weeks in the studio and also a great producer, Lawrence, who captured our sound straight away and made an awesome production.”

Indeed the production of Final Sacrifice is suitably mystical, wrapped in those classic tones and gussied up with echo and various effects. Of course, when one does such things, comparisons are sure to be in tow, like the ones regarding Noctum and their fellow countrymen, Witchcraft. “At first it was pretty annoying, and then you realize that papers/internet will always try to compare you to another new band instead of concentrating on the band in question,” says Rosen. “I think it’s lazy as hell from the reviewer’s point of view and not even worth calling journalism.”

Fair enough, and since Witchcraft isn’t an Uppsala-based band, Noctum have that going for themselves as well. Not to mention the city’s generally appeasing atmosphere and musician-friendly locale, something guitarist/vocalist David Indelof found suitable during the creation of Final Sacrifice.

“The band culture in Uppsala is quite rich. There’s a lot of bands, either you play in one or know someone who plays. And because we are a smaller city and don’t really have any venues to perform at, I think most of us try to reach out both national and international, seeking gigs and a chance to be discovered. And if you live in a city with a lot of venues there’s a chance you might get to comfortable and get stuck there.”

The temporary conundrum Noctum may enter into is the fact there already is a bevy of similarly-styled bands kicking out the jams like it was the 70s, while keeping it like that with the devil. We don’t have to point out the necessary (and obvious) culprits for furthering the development and/or popularity of this style, but, how Noctum separates themselves from other bands is obvious according to Indelof.

“I think that because we took it to a darker, heavier level for this record, we have broken out the ”ordinary” 70s rock genre,” he relays. “I haven’t heard many other bands manage to take the raw heavy metal from the 80s but still keep the groove from the 70s. And because we have a little something for listeners of both rock and metal, we open the door to a wider audience.”

Part and parcel with the sound on Final Sacrifice is the album’s concept, a thread that ties the album into one compact narrative. While the album is capable of being digested in parts, Indelof finds value in the idea of doing a full-blown concept.

“I think concept-albums are interesting to listen to,” he concludes. “Because it’s like a book and a record at same time, and sometimes you really can play the whole thing in your head like a movie, and hear the emotion of the music fit perfectly to the story. I mean, the story isn’t the same on all the concept albums, neither is the music. So how can it be overdone if it’s different stories? It’s like saying books and movies are overdone. But sure, if the story is exactly alike some other bands, that’s a problem.” 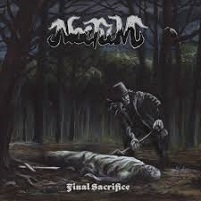 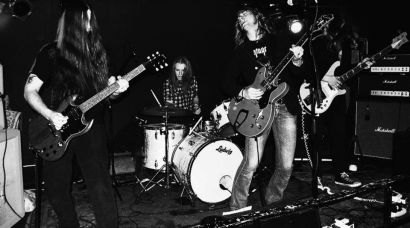