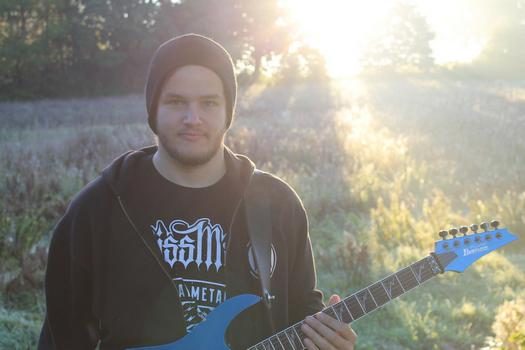 You never know around what corner you might find the next guitar virtuoso in this day and age. While many aren’t familiar with Nino Helfrich as of yet, he now has two full-length albums under his belt. Last year’s completely instrumental Dead Bodies in Motion laid the groundwork for things to come. Which brings us to the recently released Hourglass.

Hourglass is different for Helfrich. Instead of another fully instrumental album, he enlisted the talents of Bjorn Strid, Chris Clancy, and Christoph Wieczorek to provide vocals for the release. In doing so, creating a real powerhouse from a vocal standout, but one that just as easily highlights Helfrich’s talents as a guitarist. It’s a strong release when you are just as likely to hum the guitar melodies as you are the vocal hooks from some top-notch talent. We sent Helfrich an email to get some further info on this up-and-coming performer, including a transition from sports, his influences, and more.

Dead Rhetoric: What made you decide to drop the hockey stick and pick up a guitar?

Nino Helfrich: I was forced to stop playing ice hockey after 15 years, so it wasn’t a conscious decision for me right away. At the age of 18 I had a very bad injury during a game. Among other fractures I had a cruciate ligament rupture in my left knee, which is probably the worst thing that can happen to a goaltender. At that point I had already been struggling with my left knee for more than three years. It took almost two years to heal completely so I decided to stop playing ice-hockey and go to university. Picking up the guitar afterwards was just something I did purely for fun. I thought I’d might learn a few chords and that’s it. I had no ambitions to take lessons, join a band, play live or write my own music. Those thing developed over the years.

Dead Rhetoric: What comparisons would you make in terms of playing a sport versus playing an instrument?

Helfrich: The biggest difference is the fact that you can be creative on an instrument a make something completly new. In sports it’s all about competion and winning a game with set rules so you’re not really creative.

Dead Rhetoric: You picked up the guitar and reached a pretty high proficiency level after 5 years. What was your method of learning?

Helfrich: I didn’t have a certain method for it to be honest. I just practiced every day and learned a lot of stuff that was way beyond my abilities. There’s a lot of good instructional material on the Internet so you just have to put in a lot of time and push your own boundaries. I’m still trying to do that every day.

Dead Rhetoric: What guitar players influenced your sound the most?

Helfrich: Definetly Victor Smolski because he was the first guitar virtuoso that I came in contact with at a young age and he’s still one of my favourite players. I only learned about players like Vai and Satriani after I already started playing guitar. The band Korn had quite a big impact on me as well, because they made me want to pick up a 7 string which I use for most of of my songs. Also, discovering Andy James was very important because he did things that I didn’t even knew were possible.

Dead Rhetoric: You released your first solo album, Dead Bodies in Motion, last year. What memories do you have, good or bad, of the album’s release?

Helfrich: I played my very first instrumental show on release day and I remember being quite nervous. Just playing guitar on a stage without having vocals or even a band can be frightening ,but I got a very postive feedback afterwards. Overall the release of Dead Bodies In Motion was a big learning experience.

Dead Rhetoric: After an instrumental first album, what made you decide to bring in vocalists for Hourglass?

Helfrich: Actually I wanted to make another instrumental album. The idea to make a full album with vocals never occured to me, because I didn’t think that I could pull off such a big project by myself. Instrumental music is very special and not for everybody so people always ask about the missing vocals. While I was working on a second album I had the idea to put two songs with vocals at the end. I wrote about 4 songs just in case one of them might not work for one of the vocalists, and my girlfriend, who is a songwriter, wrote all the lyrics.

Luckily, all the songs turned out great so the vocal part of the album became bigger and bigger. The decision to turn it into a whole vocal album came because Björn and I had a some understanding problems, which led us to do 4 songs together instead of just one. Large parts of the initial album were done at that point, but when Björn brought up the idea to do more songs I scrapped a lot of it and wrote completly new songs for him. It was a hard decision to make at that point because, the deadline was 8 weeks later and Björn was supposed to do a US Tour with Soilwork during that time.

Dead Rhetoric: Likewise, how’d you get a hold of Bjorn, Chris, and Christoph?

Helfrich: Christoph Wieczorek and I already worked together on Dead Bodies In Motion where he did the mastering. He has his own studio called Sawdust Recordings where we re-amped the new album together and he also did the mixing and mastering. Since he is also a singer and a guitarist, it was an obvious decision.

With Chris Clancy and Björn Strid it was bit different. I just sent them a mail because they are my favorite vocalists and we talked about the project. Since Chris has his own studio called Audioworks Productions and Björn having recorded so many albums – it was very easy to work with them. Everyone recorded their parts on their own and we sent the files back and forth.

Dead Rhetoric: Would you be interested in working with other vocalists moving forward?

Helfrich: I haven’t thought about that so far, because I really see instrumental music as my main thing. I’m a guitarist after all. It’s great to have a full album with vocals for people to enjoy, but there are no plans to do this on every album from now on. In fact, I’m pretty sure that my next release will be purely instrumental again. But you never know what the future may hold. There are many amazing vocalists out there – and working with other musicians is always a pleasure.

Dead Rhetoric: Do you have any plans to do guitarwork outside of your own solo efforts?

Helfrich: There are no concrete plans to join a band at the moment, but I wouldn’t rule that out completely either. I’ve played in bands before I started working on my solo albums, so if an interesting project comes along I would definitely think about it. Having said that I’m very happy to continue making my own albums and playing shows at the moment.

Dead Rhetoric: You’ve been doing live shows – will you have vocals from the new songs or do you simply focus on the music itself?

Helfrich: Björn, Chris and Christoph are from three different countries and tour with their own bands constantly, so doing a show with all of them at the same time is just not possible. I also don’t want anyone else to sing their parts, because they all have very unique voices. I will continue to do instrumental shows – just as I did in the past. Since ‘Hourglass’ has a lot of clean singing, I’m able to play all the main melodies on guitar and add more lead playing to the songs. The album turned out way too good to just treat it like a studio album that’s never being played live. When I was supporting the Ukranian band Jinjer back in July I played a few new songs as instrumental guitar versions already.

Dead Rhetoric: What’s most important to keep in mind when it comes to writing instrumental music (as opposed to music with vocals)?

Helfrich: For me it’s important to have a song structure, even if it’s just instrumental. It’s hard to grasp this kind of music, especially when you’re not used to listening to it, so having verses, a pre-chorus, a chorus and a bridge are still necessary to me. Some progressive metal fans might argue on that but ironically people still put me in the progressive genre anyway, just because my first album was instrumental.

Dead Rhetoric: What goals do you have for yourself over the next few years?

Helfrich: My main goal is to keep making albums and playing shows. I just try to take my music and my playing as far as possible and utilize any possibilities that come to me.

Dead Rhetoric: What are your plans for the rest of 2017?

Helfrich: Of course I’m very excited to release the new album Hourglass. There are also a lot of videos, like guitar playthroughs etc. which will be released over the next few months. Following the release I will visit a few cities that I haven’t played in so far. And last but not least I just started taking lessons fom the amazing guitarist Martin Miller. 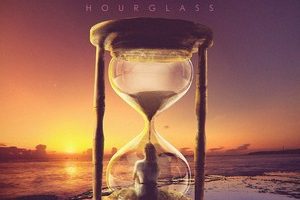