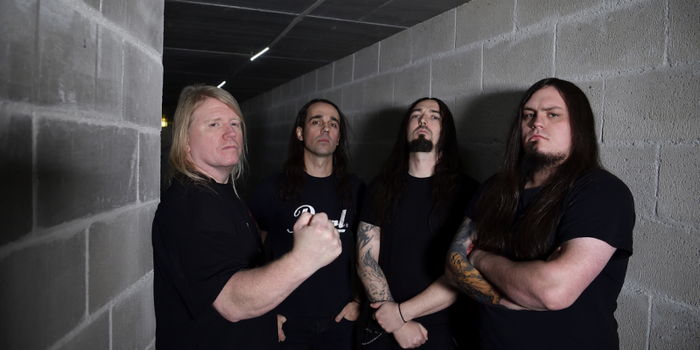 Since their inception, Nile has made waves within the death metal community. Their Egyptian-themed material was both a blunt force of destruction and a more nuanced yet cinematic experience. While they’ve maintained some degree of consistency over the years, their latest album, Vile Nilotic Rites, does sit as the band’s strongest release in quite some time. It’s brutal and caustic, and it conjures up some of the magic of their incredible debut, Amongst the Catacombs of Nephren-Ka. Prior to the album’s recent release, we had a chat with mainman Karl Sanders, who discussed the details of their latest release, fan expectations, as well as what death metal needs to do in order to stay relevant in the future.

Dead Rhetoric: I’ve been listening to the album over the weekend, and I must say, it’s got to be one of the strongest releases from Nile in recent memory.

Karl Sanders: Thank you so much! We feel the same way. I haven’t felt this good about a record since Catacombs or Shrines. There’s a feeling of reinvigoration and confidence with this new line-up. It’s so refreshing.

Dead Rhetoric: I was actually thinking of Catacombs when I was listening to it. There’s some clear differences obviously, but that raw energy is there.

Sanders: I think also, with Catacombs, that was our first album. They say that you essentially have years to work on the songs for your first record – to trim them down, hone them in and take out the fat. You are presenting the essential, pure song to the audience. I think that’s very true for this album. We spent so much time in pre-production. The songs themselves, with a focus on the arrangements, trying to get it down to presenting the essence of the songs. There’s a certain energy in that. You aren’t giving the audience a filler – you just have the important, essential info.

Dead Rhetoric: What do you do to balance things like fan expectations for such a long-running act versus keeping yourself happy during the writing process?

Sanders: That’s a fucking tricky question that I have asked myself a bunch of times. Expectations, preconceptions – they’re a bitch! They are an anchor around the neck for both the writer and the listener. If you put on the record, and you expect it to be something else, you are going to walk away saying, “It’s not what I wanted…” I don’t blame listeners for that. I’m a metal fan too. When I go and hear the new Metallica, or whatever, my brain is still on Ride the Lightning. That’s what I expect. I have a preconception of what I believe Metallica to be, and it’s goddamn Ride the Lightning. So when I get something other than that, I’m like, “Well, this isn’t what I wanted,” so I absolutely don’t blame fans.

I think fans, after a certain number of years…at some point, the band and its music are no longer the sole property of just the band. The band is also the fans. Think about Slayer for a moment. Slayer fans are in there too. The band and its fans are together – it’s more than just those four guys. It’s something larger.

Dead Rhetoric: Thinking about the new album – when you are writing, what makes a heavy riff? Is there something, in your mind, that etches out what heavy means?

Sanders: Heavy is an elusive property. It’s an intangible thing that is different – to look at the periodic table and say “Heavy = Sodium + Iodine, or whatever” it doesn’t actually work that way. What we are actually talking about, is that when we as listeners hear something, heaviness is the association of a combination of a certain emotional reaction. A galvanic response if you will, to a certain input. Being that we are all humans and we are all different, it’s not a precise formula.

When my wife makes a drink, she measures every fucking ingredient. But when I make a drink, I don’t. I grab the bottle of tequila and whatever I am mixing it with, and put it in the fucking glass however I feel at that moment. I think those drinks taste just fine. They are all a little different, but so fucking what? What does that say? We are human beings, not precise digital calculations. The input does not always directly equal the output. So what makes something heavy? It’s hard to put your finger on it, but you know it when you feel it. It’s not just about hearing, it’s about feeling. It’s about capturing that elusive feeling of doom.

Dead Rhetoric: You mentioned earlier about the arrangements for the new album. Was there anything different that you tried this time? To me, it feels like there’s a bit more this time, than say, in comparison to the last few releases.

Sanders: There was a lot more time put into them this time. There was a lot more cooperation and collaboration between members. The back and forth on these songs was extensive! We tried all kinds of things. We had a saying, “I don’t know if it’s going to work or not, but we gotta try it.” It’s the only way to really know, because it’s not a measurable thing – going back to our earlier analogy. You don’t know which combination of ingredients is going to produce the exact chemical reaction you are looking for. It’s intangible.

The only way to actually know if an arrangement idea works, is to try it and listen, then honestly evaluate it. Having bandmates that you can trust I think is a key part of that process. If you can’t fully trust that your bandmates are on the same page as you and have a common goal, then you will not be able to evaluate what you are trying to accomplish.

Dead Rhetoric: We’ve covered a number of things with Vile Nilotic Rites already, but do you feel that there’s anything else that was done differently?

Sanders: I think it just boils down to those few things. The willingness to ruthlessly self-evaluate, trusting your band members, and trying a zillion possibilities. That’s it. The brotherhood – that’s fucking crucial.

Dead Rhetoric: What do you recall about the earlier times of the band around Amongst the Catacombs of Nephren-Ka?

Sanders: What I remember about Catacombs was the feeling of, “Oh my God, we are actually getting our chance to make a fucking record, and no one is telling what to do!” We could do whatever the fuck we wanted. We were delirious, almost drunk, with the sense of empowerment and excitement. We would do things in the studio, since there was no one telling us that we couldn’t do anything, we felt like we were at complete liberty to have an ocean of potential targets to just shoot anything we wanted. It was exhilarating.

Dead Rhetoric: So what do you feel allowed you to succeed at the onset – what did Nile have going for them that maybe other bands didn’t?

Sanders: I think what was making it possible for us, was that we were doing our own thing. When Catacombs, there was no one working that little niche. We kind of carved one out for ourselves. We found ourselves, once we had done that. We had complete liberty to do what we wanted. There were no fan expectations. There were just fans going, “Oh my God, this is unique and different! This is great!” That’s a wonderful position to be in when you are a younger band. The weight of expectations, 25 years later, is monstrous. It’s a huge anchor strapped around your neck. It’s going to potentially drag you down to the bottom of the ocean and make life impossible.

Dead Rhetoric: Do you feel that there are any lessons that we should take away from the Egyptians when looking at the current state of the world?

Sanders: Yeah, and here’s the big one. People are stupid as fuck. People have not learned anything in thousands of years. We have got technology, but have people gotten any better or smarter? I don’t really know man. On the stuff that really matters, human beings are still despicable creatures.

Dead Rhetoric: 25 years into Nile’s career, what does death metal need to do to stay relevant in the future?

Sanders: I think a lot of bands could benefit from the mindset of guys like Vitriol. These are guys that understand what real metal is. They don’t give a fuck about all of this stuff that passes itself off as death metal these days. Death metal never cared what anyone thought of it. But there’s a lot of death metal today that is very concerned about sounding like everything else across the musical spectrum. Real death metal doesn’t need to be shred/tech/core/math – all of that.

Not that there is anything wrong with those elements, but death metal doesn’t need all that fucking shit. Death metal needs conviction, passion, and violence. That’s what it is at its core. Those aren’t elements on the periodic table, those are things that come from your soul.

Dead Rhetoric: If we went into the future and looked back, what is Nile’s lasting legacy for death metal?

Sanders: I think, hopefully, we made some music that people enjoyed. It touched some people and meant something to somebody. But also, I think there is a lesson to be learned from Nile. It doesn’t matter where you come from, or what kind of music that you want to play. If you are willing to work hard at your craft and make something that people will enjoy, there’s a place for it in this universe.

Dead Rhetoric: Are there any positive experiences that you have had that stick out with the band?

Sanders: The rebirthing and reinvigoration of our band with the new line-up is huge to us right now. It’s everything in the world. That right there is what has allowed Nile to move again, in a positive direction.

Dead Rhetoric: So you feel pretty confident in looking forward at this point.

Sanders: I went to the doctor yesterday, for some minor aches and pains. Every time you go to the doctor, they take your blood pressure. My blood pressure a year ago, when we were in the thick of working on this record, was 146/80. Yesterday, after the album is done and coming out – we’ve already done a complete European tour playing this material…my blood pressure was 118/80. What that says to me, is that there is a huge mountain of stress that has been lifted, and yes, we are feeling very confident about this album, our place in the metal world, and the potential to do something meaningful for our fans.

Dead Rhetoric: What are Nile’s plans for the rest of 2019 and into next year?

Sanders: Right now, the plan is to take this music and bring it to live audiences everywhere we possibly can. I don’t know that its any wiser to think about anything else right now. We were having a band meeting the other day, and George [Kollias] was actually saying that we don’t need to think about another record until this one actually comes out. We need to stay focused on the task at hand. The task right now is to take this record to everywhere possible. 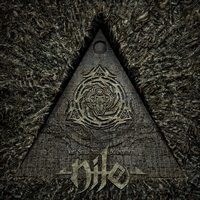 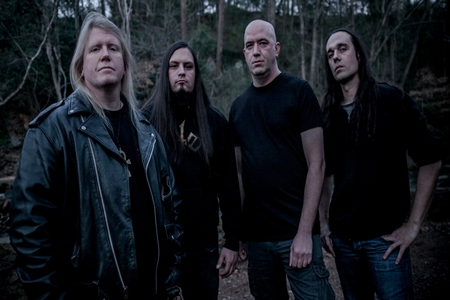 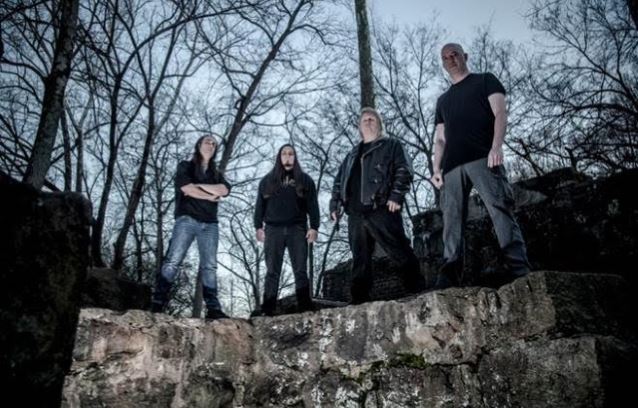