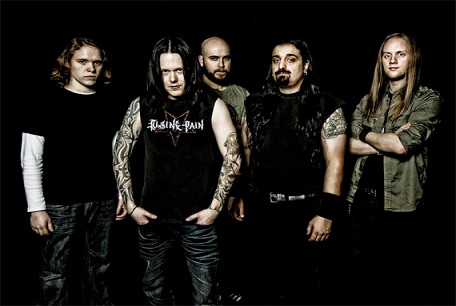 Hard not to do this, but the dominance Nightrage and Omnium Gatherum have over the melodic death metal scene is like watching two great NFL quarterbacks in their prime. For comparison’s sake, it’s on par with how Tom Brady and Peyton Manning have reigned over pro football. Both possess unique qualities, with Brady being methodical and sometimes flashy (Nightrage) and Manning holding up the cerebral and conniving end of the bargain (Omnium Gatherum). Just like football loonies should count their lucky stars they’re able to watch the greatness of Brady and Manning, we should be thankful Nightrage and OG are around to rescue melodic death metal from what it nearly became at the onset of the 00’s: Dead and bloated.

Nightrage is to be the point of discussion of this interview, who are on their fifth album with Insidious. Led by mainman (and melody-maker extraordinaire) Marios Iliopoulos, Nightrage have unleashed another deadly display of melody-stricken death metal. There’s no trace of softness here – Nightrage is undeniably at their best when hitting the throttle on songs like “Hate Turns Black,” “Insidious” and the gloriously infectious “Poignant Memories.” IfInsidious proves anything, it’s that there may not be a melodic death metal band more reliable and consistent than Nightrage.

With the band’s North American run with Firewind right around the corner, we snagged Iliopoulos and singer Antony Hämäläinen for a round of questions about the band’s stable lineup, why there are so many (awesome) guest appearances, and the quasi-debate over the clean vocals on 2007’s A New Disease Is Born. Here’s how the duo responded…

Blistering.com: This is the first time in your history you’ve had a consecutive lineup between albums. How does that make you feel?

Marios Iliopoulos: Yeah, that is true it’s the first time for us and we feel happy for it, having some cool guys in the band that burn to play the Nightrage songs; it’s a good feeling. I had the bad luck to have a lot of bad people in this band before, that they were hungry for fame and money, but not anymore. [These guys] give us hope and also we know that we can move on like an entity and make more and better albums in the future.

Blistering.com: How does this band function as a unit? There seems to be a really good vibe in the band since Antony joined.

Iliopoulos: Antony and the boys are really into the thing. We keep in touch on daily basis even if we are living far from each other, that’s not an issue for us. So far so good and I wish that more great things are on the way to come for this line-up.

Blistering.com: It’s pretty cool to hear Tomas Lindberg (At the Gates), Gus. G (Firewind), Tom Englund (Evergrey), and everyone else on a Nightrage album. Any particular reason why you have so many guests on the album?

Iliopoulos: Well we wanted to bring back some good old friends, and they are always willing to help us anyway. Gus was also playing on the previous album and also on the new one. We also had songs that they were call for clean vocals and some other stuff like string arrangements, etc. I think we got all those guys to give some extra touch on the songs that we have composed, and make this album a good mix of great music, that has all the Nightrage elements, aggressiveness and ethereal melodies.

Blistering.com: As a songwriter, it seems like you’re continually finding new ways to introduce melody into your sound. Do you think this is a knack you have?

Iliopoulos: I love melodies for sure and I think that I have my own way to incorporate some cool melodies into the wall of guitars that we always have. My songwriting style comes from older times like the 80s when bands knew how to create some nice hooks and do some good songs. I think this factor is the one that makes Nightrage very unique that we never sell-out or we never forgot where we are coming from. We always know and love to be a metal band. Having all those influences combined with the metal aggressiveness of our music, makes us the band that we are.

Blistering.com: Some of your best melodies pop up on “Hate Turns Black” and “Poignant Memories.” What’s the story behind these two songs?

Iliopoulos: “Poignant Memories” is one of the first songs that we composed along with Antony and Olof [Mörck, lead guitars] and I think this song and some of his riffs are coming from the early stages of Nightrage when Gus was also on the band. It’s a good mix of old school and melodic metal. “Hate Turns Black” its very straight forward and already a lot of people loved that song, has fast riffs and epic kind of melodies, also Iron maiden was a big influence and some parts are very Maiden-like from their glorious period of the Seventh Son Of A Seventh Son album. The chorus of “Hate” has really different guitar riffs/melodies played on top of each other and that creates some really cool effect, that u don’t know from where exactly the melody is coming from.

Blistering.com: Five albums in, you’ve found your signature sound. Is it safe to say Nightrage is one of the more reliable bands in melodic death metal?

Iliopoulos: Well, we have found for sure what we want to play and I think that when you listen a riff and melody coming from us, you know it’s a Nightrage song. I leave the reliable band thing for the fans to judge. We are happy that we can release the music that we love out there, and also that we have thousands of fans that love the music that we are doing.

Blistering.com: Any temptation to go back and do clean vocals like you did on A New Disease Is Born? Or, were those vocals more of a result of who you had in the band at the time?

Iliopoulos: I think that was the story there, I had some guys at the time in the band, that they were into really trendy music and they wanted to turn Nightrage to sound like a shitty average pop metal band. But on the contrary and what people believe, I didn’t let that happen, and the reason for that is the way I played the riffs and the songs that we had, the Nightrage sound was there, only some clean vocals were a bit weird for our kind of sound. But in reality, I can tell you that I also love that album and it has some of our best music in there, so as you can see even the most trendy people can’t really touch the music that we are doing,. I would love to see some cool clean vocals coming on the next album. Antony has a cool voice and he can come up with some cool ideas, but not because it has to, but only if we will have the right songs for them to be.

Blistering.com: Do you consider that album (A New Disease Is Born) to be the black sheep of the Nightrage discography?

Iliopoulos: Like I told you before, I love that album and what happened with the guys that I had at that time belong in the past, what matters is that the music is amazing. Recently I was listening to this album and also realized how good as an album it is. It’s also a good thing it’s a bit different from the other albums, but you know at the same time, you are listening to a Nightrage album. It contains songs like “Spiral,” “A Condemned Club” and “Surge Of Pity” that a lot of people consider classic songs, so my answer on your question is that I think that this album belongs to the Nightrage catalog and we also as a band we are proud of this. And don’t forget Jacob Hansen did amazing production on this one.

Blistering.com: Switching gears, you have a North American tour coming up. What are your hopes/expectations for it?

Antony Hämäläinen: Well, we hope to bring some new fans to the table [laughs]. It should be an amazing tour. We know the guys in Firewind like family, so it should not only be fun doing the shows, but hanging out afterwards too. A lot of the bands on this tour sound nothing like us, which is a great thing since it will expose our style to people who would not normally come see us there.

Blistering.com: What can we expect to see in terms of a setlist?

Hämäläinen: You can expect pretty much a song from every album. We have to of course, promote the new record so, there will be a few songs from that. Since I joined the band, Marios has kind of made it my job to make the setlists [laughs]. But of course the other guys get to throw in what they’d like to play. I really focused on this tour to play a lot of old school songs as well. I think there are a lot of fans out there that will come to the shows and want to hear songs from the first two records. So the set has its far share of “hits” as one may call them [laughs].

Blistering.com: You’ve done a few stints in North America before, but with a different lineup. Do you think this is the best lineup to showcase in this country?

Hämäläinen: Yes, easily. This has been the longest lasting line-up in the band’s history. About five years now. So in my opinion, we know the songs and how to play with one another pretty damn well. Everyone who is coming to see Nightrage only on this tour will not be disappointed. Personally, I will be giving 150 percent every night like I have done since I joined the band.

Blistering.com: Finally, what’s on the agenda for the rest of the year?

Hämäläinen: Touring. Next up after the North American tour is Europe. We should be doing a tour of Europe in the beginning of 2012. Then hopefully in the spring we can come back to North America again before summer festivals. Hope to see all of you guys out there! 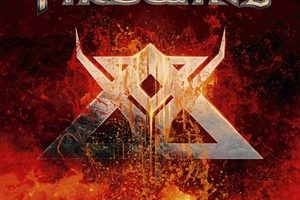