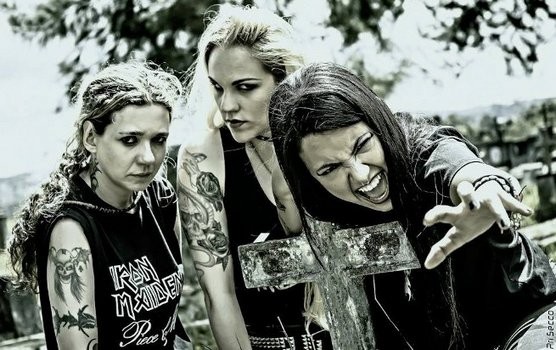 The business model in metal these days to have any sort of living is: tour, tour, and tour until you can’t play anymore shows – go back in the studio to record a new album – and get back out on the road. Bands know that live performances can make or break careers- the feeling of passion, power, and energy exchange from country to country, audience to audience is something second to none. Brazil’s Nervosa understand and embrace this business model – even if roadblocks and obstacles may be thrown their way at a moment’s notice.

As you’ll discover in this quick interview with vocalist/bassist Fernanda Lira conducted after a show in New Hampshire on tour with Suspended, Nervosa had to quickly find a replacement drummer for this month long North American excursion booked months in advance when Pitchu Ferraz told the band she would be quitting on the final date of the European leg. Risking a huge loss of income is not in the cards, so fortunately they’ve been able to continue forward with Dead Asylum drummer Samantha Linda from Vancouver, Canada – levelling audiences here with their fervent brand of deadly thrash.

So let’s get up to speed on the current activities for the band, particular tour rituals/superstitions, and views on the various audiences where the band has toured so far – as well as what will be in the cards for next year.

Dead Rhetoric: The first question is probably the most obviously – you mentioned on stage that you just lost your previous drummer Pitchu Ferraz, at the end of the most European tour. Then you had to scramble around to find a replacement because you didn’t want to miss these North American tour dates. Did you have any feeling that she was going to leave, or was this a total shock?

Fernanda Lira: This situation has been going on for a little while, but I would never imagine it would happen the way that it did. What shocked me was the way that it happened- I mean, dropping a tour. She finished the European tour, but she quit seven days before the next tour. Everything was arranged- flight ticket wise and everything. That was pretty shocking- because I think when you commit to something, you have to stick to the end. That would be ethically. What shocked me was the way it happened. If it’s going to be good for both sides, then that’s cool. We had a pretty hard time, for two nights we had no sleep trying to look for girls on the internet, on YouTube, hitting all of our friends in the states and Canada to see if we had any recommendations or anything. Finally, we got to Samantha (Linda) – it was Tony (Foresta) the singer for Municipal Waste who put us in contact. She took the challenge, and I really appreciate that.

Most other girls thought that in one week they would have no time, or they wouldn’t be able to get the time off from work. Everybody was refusing not because they didn’t want to, more so because of the short notice. What she did was she took the challenge and she’s been doing great.

Dead Rhetoric: Did she learn all of the set list separately and then you got together in Canada before the start of this leg of the tour to rehearse together?

Lira: Exactly, she learned all the songs in five days’ tops. And then when we were together in Canada, we rehearsed together twice. The day of the first gig we rehearsed, and she’s been great. She’s been a great help.

Dead Rhetoric: You are already committed to a European tour with Destruction, Enforcer, and Flotsam & Jetsam after this. Will that be another situation where you have to find another replacement drummer until you secure a more permanent one?

Lira: We are currently seeing some options- we unfortunately are going to need a Brazilian drummer in the long run because you can’t really do tours in Brazil. You have to gig on Friday, Saturday, and Sunday- and we can’t afford to have someone fly in. We are analyzing some options already. The thing is, we will take some time to announce a new, official drummer- because this is the second time we have gone through this and we don’t want to have this happen again. We will only announce an official drummer when we are 100% sure that the person understands where we are in the metal scene and will be cool to tour with on the road, who will not quit a tour. This will take some time. For the next tour Samantha will be going with us on the Destruction tour in Europe. For the gigs in Brazil we have someone else who will back us up. We will see, we will definitely not rush. We don’t want to risk having someone who is not 100% committed again. We can’t really afford this again.

Dead Rhetoric: How did you decide to have New Mexico act Suspended as the main support for this tour- it’s definitely a good package to show that thrash isn’t just a male-dominated genre?

Lira: It’s a good feeling to have a package like this. People might not believe it but it’s encouraging to many girls- two all-girl trios playing thrash, it inspires and encourages other girls, make them feel represented. That was not the main reason why we chose them. The main reason was we toured with them in the United States in January-March, they were super cool to tour with. We could tour in their van, they are very laid back and very easy to get along with, which is important to do when you are touring together. We became close friends.

Dead Rhetoric: Are there any particular rituals that you like to do as far as being on tour- or superstitions you may have to make sure that the show goes well?

Lira: Although I am a very superstitious person, we don’t have any rituals anymore. We are used to touring. The only thing I have to do is my warm up ritual, that’s the only thing I really have to do. We are now learning how to behave on tour, we like to be cool. We’ve been touring already for over two months- it’s going to be three more months before we go back home. Before the show we are relaxed, we try to sleep as much as we can in the van or at the hotels when we can. Speak as little as possible in order to save my voice. These rituals may not seem like much but in the end it helps a lot. Also, other things like have some time alone, sometimes taking a walk by yourself, or listening to things on your phone. It is all good to keep your sanity, your body healthy and your mental health.

Dead Rhetoric: Are you starting to see a lot of forward momentum for Nervosa – you’ve now been to Europe a couple of times, coming over to North America for a second time. Would you say people are understanding what Nervosa is all about?

Lira: Yes. Not only about coming out to the shows, it really depends about the place you are playing and whether it is a city or not as well as how the promoter does. I can definitely see progress, touring Canada for the first time, being on the East Coast, the awesome tour we will be doing with Destruction- as well as playing new territories for the first time like the Ukraine. Our new album, the feedback has been massive. Merch is being sold out all the time- I’m really sorry that you couldn’t get a t-shirt, only having one size really sucks. We have been running out like crazy but we still have stuff available online. The cool feedback from the fans has been amazing.

Dead Rhetoric: Touring Europe- where do you see the major differences as far as audiences versus playing in Brazil/ South American countries and over here in North America?

Lira: Oh yes, there are many differences. Each place you play is special in a way, and in different ways. The main difference is in Latin America, things get crazy! Because we don’t get as many shows there as you have in the United States or in Europe. When there are bands playing there, we go crazy and wild. We are very passionate because we are very needy of tours there. Latin America is probably the best crowd you will ever play in front of because we are very passionate about metal. In Europe it’s cool, people are very observant and they can provide great feedback after the shows. You have the summer festivals which are great, awesome experiences. As far as North America, it really depends. In Canada, it got really wild in some places. In the United States on our last tour, it could get crazy. When we played the West Coast we had a lot of moshpits. The United States stands in between Latin America and Europe- because in Europe people can be more reserved, where in Latin America people can be very crazy.

Dead Rhetoric: Who have been some of your favorite bands that you’ve been able to play with over the last few years?

Lira: Wow. First, Destruction- and we are lucky enough to be playing with them again, which is pretty cool. Let me see… lots of awesome Brazilian bands, Exodus was major. We got the chance to play with D.R.I. in Brazil, and that was a great time together. Those are the top ones- also some of the festivals that we’ve played, but you can’t count it all because you are playing with hundreds of bands at these festivals. We would play on the same day as Annihilator and Cannibal Corpse, which is a dream come true for us. Playing with Toxic Holocaust was really cool. We get the chance to meet some of these people at the festivals as well- for example the Cannibal Corpse guys, Kreator – Mille Petrozza actually knew of us, and that was very cool. We always find a way of getting in touch with these people, and we know sometimes it’s the only chance we’ll have, which is pretty cool to promote the band.

Dead Rhetoric: We talked before about the importance of Sepultura to the Brazilian metal scene – does Nervosa also look to the international success of bands like Krisiun and Angra as a model of what you can do?

Lira: Definitely. Sepultura was the main act to pass us this message that you can be South American, play extreme metal, and be successful. So the main message did come from them, Krisiun are another huge example to me. They are doing great internationally, they are awesome people, so they really inspire us to maybe get there.

Dead Rhetoric: What are the plans for 2017, are you already looking into touring opportunities to continue supporting Agony? 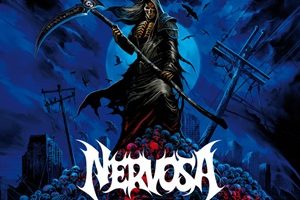 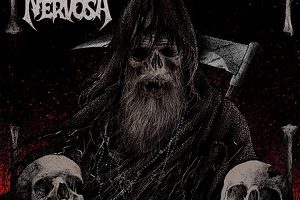