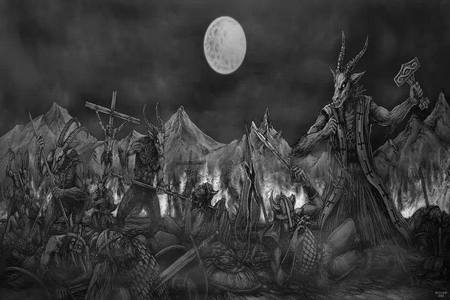 We writers might have blatantly distorted views but Canada’s Necroholocaust have blatantly distorted music. To listen to just one of their songs is to have a full-throttle experience with genuine goat metal. Though their music might not be for everyone, it’s definitely something to consider for those who have a taste for “total” goat worship metal (e.g., Beherit and Sadomator). The new album, the beyond-blasphemous Holocaustic Goat Metal, is a total abomination and it’s marvelous how nasty it gets. If you don’t understand them now, maybe you will after reading this.

I got in touch with Necroholocaust’s radical vocalist/guitarist – Plaga Negra, who is loud-spoken in all manners, not to mention the fact he answers most questions in ALL CAPS, turning his loud-spoken statements into rather screaming statements. One of my favorite Negra quotes: “IT MIGHT HAVE PISSED SOME PEOPLE OFF WE SERIOUSLY DON’T GIVE A FUCK.”

We discussed his band’s new album, old albums, artwork and logos, details about the band, concepts of their music, the story behind the band’s name and the true meaning of “goat metal.” Of course, no Necroholocaust article would be complete without props to Satan and despise towards Christ!

Dead Rhetoric: Holocaustic Goat Metal, in this writer’s opinion, was great. However, I’ve seen a number of bad reviews from miscellaneous sources but as they say, to each their own. Let’s start by going straight down to the core. What is the sickest sentence you can think of that’ll give this article an extra kick? In other words, something that expresses the Necroholocaust attitude and/or a quote that’ll elucidate, in your own words and views, what Necroholocaust and Goat Metal is all about.

PLAGA NEGRA: We honestly don’t care about bad reviews. We don’t do this for the casual listener, if the average listener understood what we are doing that would mean we are doing something wrong. We do this for ourselves and our comrades. If others like it along the way then so be it, this is not accessible metal, and is not for the faint at heart, SLAUGHTER THE LAMB + WORSHIP THE GOAT.

Dead Rhetoric: I respect musicians who respect themselves, and I appreciate such strength in music and art. Unfortunately, I’ve witnessed too many arguments about the artwork on this last album, as well as the previous ones. I mean, I’ve seen people nearly tear one another apart limb from limb over things such as other bands trying to “steal” the style, copying the name, and so on. I presume you don’t care for all that drama but I have to ask if you can give me a little info about the artwork, both new and old album covers, to clarify things for everyone who, for one reason or another, have been misinformed. The work of Necroholocaust deserves proper recognition.

NEGRA: Haha I played DTF 2 in Morbosidad, and DTF 3 with Necro and Morboso, Damn Karlos is on 10 now, haha…What was the Drama about? Art work? Our Artwork? You are right I don’t much care for any drama haha… The Cover art is By Sickness666 from Thailand, he has done lots of stuff for us over the years and he has done stuff for Black Witchery – Morbosidad and lots of others too…Our Logo is by Chris Moyem who has done other art for us too, the latest being the Necroholocaust/Zygoatsis split [released October 2014].

Dead Rhetoric: I’ve read in some of your other interviews that the name, Necroholocaust, came to you in a dream. Instead of being redundant and asking you about where you came up with the name, I ask you to go deeper into its story. Could you tell me about this dream?

NEGRA: I DON’T REMEMBER ALL THE DETAILS AS IT WAS IN THE LATE 90’s, WOKE UP FROM A SUBSTANCE INDUCED SLEEP AND WROTE IT DOWN ALONG WITH A BUNCH OF OTHER STUFF, SOME I USED SOME I DIDN’T. I ALWAYS THOUGHT IT WOULD MAKE A GREAT BAND NAME, AND OBVIOUSLY SOME OTHERS THOUGHT THE SAME BY TRYING TO USE IT AFTER US. BUT I DON’T THINK THEY EXIST ANY MORE, I’M SURE SOME PEOPLE CALLED THEM OUT ON STEALING THE NAME. I PERSONALLY JUST SHOOK MY HEAD AND SAID WHATEVER NOBODY IS GOING TO MISTAKE THEM FOR US AND WHAT WE ARE DOING.

Dead Rhetoric: It’s quite remarkable how Necroholocaust earned such widespread recognition before releasing a debut. Why did you wait until now to release your first full-length? And, how long did the whole process of making the album take, that is, from writing the songs to the final press?

NEGRA: JUST LIKE ANY BAND YOU HAVE TO PUT OUT RELEASES, I DON’T THINK IT IS MANDATORY THAT YOU HAVE TO HAVE DEBUT LP’s OR ANYTHING LIKE THAT FOR PEOPLE TO TAKE NOTICE. SOME OF THE BANDS I REALLY LIKE HAD ONLY RELEASED DEMO’S, I THINK PEOPLE JUST LIKED WHAT WE WHERE DOING NO MATTER WHAT IT WAS, AND SEE IT ISN’T JUST A COPY OF SOME BAND WE LIKE, I MEAN I WORSHIP BEHERIT/SADOGOAT/BLASPHEMY BUT WE DON’T SOUND LIKE THEM DUE TO OUR MORE PUNK APPROACH TO THIS BAND.

IT WAS JUST THE RIGHT TIME TO DO IT, WE HAD THE RIGHT BAND MEMBERS, THE RIGHT SONGS AND THE RIGHT AMOUNT OF SONGS TO MAKE THIS HAPPEN, AND A PATIENT RECORD LABEL, AS WE OWED IRON BONEHEAD A FULL LENGTH LP FOR A FEW YEARS, BUT IT WAS THE WRONG TIMING. ABOUT TWO-THREE YEARS, SOMETHING LIKE THAT, SOME SONGS I STARTED WORKING ON A WHILE AGO SOME ARE RECENT.

Dead Rhetoric: How would you compare/contrast Necroholocaustic Black Metal to your previous work?

Dead Rhetoric: “Fuck Norway” is one of the most memorable war-causing/argument-instigating scars upon the worldwide history of black metal, which is great because that’s what black metal is all about in some perspectives. You’ve mentioned this refers to how Black Metal has (unfortunately) taken a turn into a “rock star” approach… What is the message and/or meaning of it? Who, if a specific person, first proposed the title? Please share anything else that has to do with the album and what it stands for.

NEGRA: THERE IS NO MESSAGE OR MEANING TO THE TITLE AND IT HAS NOTHING TO DO WITH THE COUNTRY OR THE PEOPLE OF NORWAY. IT WAS JUST A “FUCK YOU” TO THE “BLACK METAL ROCKSTAR” MENTALITY, IT CAME ABOUT BECAUSE ME AND PS. CHRISTRAPE FROM BAPHOMETS HORNS (WHO ALSO PLAYED GUITARS FOR NECROHOLOCAUST LIVE GIGS FOR ABOUT FOUR YEARS) THAT’S THE WAY WE USED TO SIGN OFF OF OUR MESSAGES AFTER TALKING TO EACH OTHER, “FUCK NORWAY,” SO WE THOUGHT IT WOULD MAKE A GOOD TITLE, IT WASN’T “WE COULD PISS PEOPLE OFF IF WE CALLED IT FUCK NORWAY.” NOTHING LIKE THAT AT ALL, WE JUST WANTED TO VOICE OUR DISDAIN FOR ROCK STAR ATTITUDES. IT MIGHT HAVE PISSED SOME PEOPLE OFF WE SERIOUSLY DON’T GIVE A FUCK.

Dead Rhetoric: Define or describe in your own words “Goat Metal.”

NEGRA: IT IS “TOTAL” GOAT WORSHIP METAL… BEHERIT/SADOMATOR ARE PRIME EXAMPLES. I DON’T LIKE THAT SOME PEOPLE THINK THAT IF A BAND HAS GOAT IN THEIR NAME THEY ARE GOAT METAL. MOST CERTAINLY ARE NOT, THAT IS AN UN-THOUGHT PROVOKED THEORY BY PEOPLE THAT HAVE NO BUSINESS IN GIVING AN OPINION.

Dead Rhetoric: Your last words seem to always be “slaughter the lamb + worship the goat.” So, may I ask you to extend that? Say something crazy and blasphemous. Or, elaborate on the meaning of the phrase. I’m sure the lamb is Christ and the goat is Satan ha-ha.

NEGRA: I THINK YOU JUST ANSWERED THE QUESTION. THE GOAT REPRESENTS THE ADVERSARY OF CHRIST, THAT COULD BE SATAN, OR ANYTHING ELSE YOU WANT IT TO BE; THE LAMB REPRESENTS THE BASTARD SON OF GOD OR ITS BLIND FOLLOWERS… SLAUGHTER THE LAMB + WORSHIP THE GOAT. 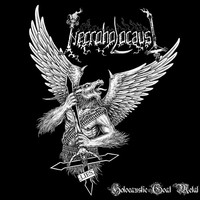