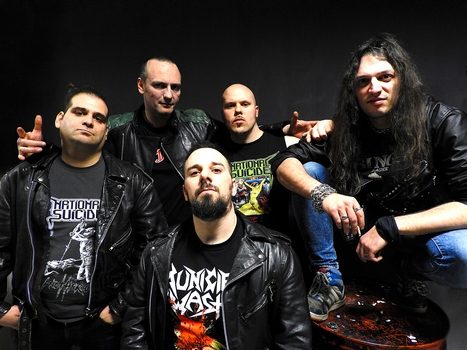 The crunch of speedy guitars, the whir of snare hits, tactile kicks, and whirlwind fills, plus the sneer of melodies penetrating the air – it’s the sound of thrash metal in prime-time form. Something Italian act National Suicide have been well-equipped to deliver since their 2005 inception. Proudly taking influences from both sides of the US marketplace in terms of the Bay Area and East Coast, their third album Massacre Elite contains the right mix of savage riffs, gang choruses, frantic lead breaks, and Bobby Blitz-oriented vocals necessary to bring the dead to life once again.

Feeling the need to learn more regarding the activities of this quintet, we fired off some questions to vocalist Stefano Mini. You’ll learn more about the history of the band, favorite shows that they’ve done with many classic bands inside and outside the thrash realm, their thoughts about violence and how it relates to their cover art outlook, and some more insight into the healthy thrash scene growing in their home country.

Dead Rhetoric: What can you tell me about the formation of National Suicide in 2005 – did you all know each other from previous bands/acts, and did you know straight away the type of thrash you wanted to develop through your initial set of rehearsals?

Stefano Mini: In the beginning was Riven, a good cover band playing some old school thrash metal classics from Slayer, Overkill, Exodus, Megadeth and so on, When Riven came to an end, myself, Ivan and Bob (he’s not in the band anymore) decided to go on playing the same old stuff with Ema and Tiz, who joined the new band and National Suicide sounded quite good. So National Suicide was born, and the first song we wrote was “Sucks’n’Artillery”; then came “National Suicide”, “Into the Clubhouse” and “This Is A Raid”.

Dead Rhetoric: What memories do you have surrounding your demo The Old Family Is Still Alive in 2007 – how did the recording and songwriting sessions go for this, were there any surprises or challenges that came up and did it meet your expectations in developing a footprint on the local/national scene?

Mini: To tell you the truth, initially we did not think about a real demo work … We recorded those four songs for our Myspace page, just to let the people know what our music is all about and that the old school was back in Italy too. Then My Graveyard called. I can’t remember much about those recording sessions at Mago Studios. We used to drink a little too much, you know; but I remember the great feeling in writing that stuff! Good times …

Dead Rhetoric: How did My Graveyard Productions come into the picture to sign the band, who would release your debut full-length (which also is called The Old Family Is Still Alive)? Any specific reason why you kept the title the same from demo to album, and do you see the growth in songwriting with the additional songs on that record?

Mini: Giuliano Mazzardi (My Graveyard’s boss) was a good fan of ours, so we signed with pleasure for his label. He asked us to make a demo out of those MySpace songs as soon as possible, as a kind of promo for the album. Here’s the reason why they are both called The Old Family Is Still Alive. I don’t think there was any real growth in songwriting with the additional tracks on the album, not really. We still play “Sucks n’ Artillery” (the very first song we wrote), I mean, because we think it’s great song.

Dead Rhetoric: There was a seven-year break between albums, as you also signed with Scarlet Records who released your second album Anotheround. What exactly took place in the long break, were there personal or business circumstances that developed to cause the delay, and did you ever worry if National Suicide would continue?

Mini: We played a lot all around Italy, Germany, Spain. We took the stage with bands like Onslaught, Exciter, Jag Panzer, Jaguar, Raven, Whiplash, Satan, Sodom, Tankard, Omen, Savage Grace, Legion of The Damned, Attacker and many other international acts. Then something happened. I don’t want to get to the heart of the matter, but in the end, we decided to go on thrashin’, you see. Anotheround is better than The Old Family is Still Alive, and Massacre Elite is even better than Anotheround. Now that Ema is back, everything’s perfect and the band has never seen better days.

Dead Rhetoric: Massacre Elite is the latest album – another strong outing of thrash with more East Coast-oriented influences from the United States that differ from the new breed of bands that seem to take a lot of Teutonic or Bay Area slant to their sound. How do you feel the band has advanced and grown- and what are your thoughts on the musicianship, songwriting, production, etc. for this record?

Mini: Massacre Elite is our best album: it’s harder and faster and sharper than ever, with deep roots in the American thrash metal scene of the eighties, but even some distinctive features that make it instantly recognizable as a National Suicide record. We love the old East Coast sound and the old Bay Area sound as well, you know; and that’s all we want to play. Ema is an incredible drummer, Tiz and Valle are the best guitar players I’ve ever known, Ivan is an animal on stage. What more could I ask (for)? I just have to scream louder! (laughs). I think that we have stepped up our game technically, and this helps us in writing better songs.

Dead Rhetoric: Describe the fascination with dive bars enough to write a song about it on the new record? What are some of the best moments you or other band members have had in dive bars that you’d like to share?

Mini: “Take Me to the Dive Bar” is a kind of thrash metal love song, you know. It talks about a boy and a girl going to dance in their favorite place. To tell you the truth, I only know dive bars and motorcycle club houses. So …

Dead Rhetoric: Your cover art in my eyes comes off slightly more extreme than most thrash bands – how would you describe what this imagery does to set up the listeners for what to expect when listening to National Suicide?

Mini: Our cover art must take you to the realm of adrenaline, surprise and contradiction. A lot of bands use those satanic images, but we’re not sad guys, we’re still strong enough to feel the joy of violence. Violence is all around us, in the streets, on TV, everywhere … And it’s terrible, I know. But violence has got a great energy too: it’s the power of life itself. If you’re strong enough, you can even laugh as you destroy your enemies and obstacles, because you feel your power increasing. Our cover art is the door you’ve got to open to enter that magic place that is your own inner truth, what keeps you alive: adrenaline, surprise and contradiction.

Dead Rhetoric: What is your outlook on National Suicide on the live front? What do you hope to be able to put across, and what have been some of your most memorable shows/festivals you’ve played at that will stay forever embedded in your memory banks?

Mini: We’re gonna play a lot in the next months, because an underground band needs the stage as every true rocker needs…a dive bar, you know! Some gigs have been confirmed and some will be confirmed very soon. I love playing live, and each time is different. Sometimes we feel good, sometimes we don’t, but we always try to do our best to make the people bleed and mosh, and enjoy. I’ve got so many incredible shows in my memory. I will never forget those with Onslaught, Artillery, Exciter and Raven.

Dead Rhetoric: How would you describe the support for thrash in Italy – is it as active a scene for the local bands as it is when international tours come through? Who are some other recommendations for bands (in thrash or other metal genres) from your local area that the readers need to check out?

Mini: We really can’t complain. You can hardly say that there are not good thrashers in Italy! And there are some very good thrash and speed metal bands too: Baphomet’s Blood, Adversor, War Hawk, Game Over, Explorer, Violentor, Injury, Ultra-Violence, Bullet Proof, just to mention some bands as an example.

Dead Rhetoric: How does the band maintain a balance between your music activities while also holding down day/night jobs and spending time with family, friends, and relationships? Are the important people in your lives supportive and appreciative of your endeavors with National Suicide?

Mini: That’s the problem, man! We all are very busy, so that we decided to keep a low profile and to refuse any long tour: we just can’t afford it. It’s a question of money. Sad but true: we’ve got to work to live. Is there any Maecenas out there? (laughs) We have supportive girlfriends, anyway. They love our music.

Dead Rhetoric: What worries or fears do you have regarding the world that we live in today? Are there certain areas that you believe humanity needs to focus on to make the world a better place for future generations?

Mini: Not worries or fears, only certainties. The world’s population is over seven billion, but how many can eat twice a day? If only each one of us on this planet starts thinking that the time has come for everyone to eat one more sandwich a day, can you tell me how we could keep our standard of living? Last but not least, I’m not sure we will learn to share what we’ve got, but what about them? Do you think they will want to? I see bad things arriving.

Dead Rhetoric: Are there other side projects or active bands that the members of National Suicide have going – and is it important to stretch creatively and energy-wise to be able to make National Suicide that much stronger when coming back to those activities?

Mini: We all have some other side projects going, but that’s not a problem for National Suicide. On the contrary, we think it’s important for us to play different things (rock’n’roll, jazz, blues …) to let new ideas enter our minds. We can turn everything to an old school thrash metal song, anyway! No problem (laughs).

Dead Rhetoric: What are the short-term and long-term plans for National Suicide over the next year or two? Has work already begun on the next record in terms of developing ideas, riffs, and songs – and if so where do you see this set of material progressing?

Mini: I think that the next work will be a concept album. 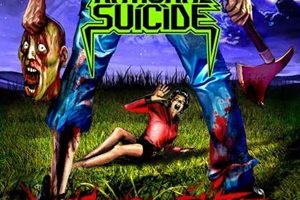