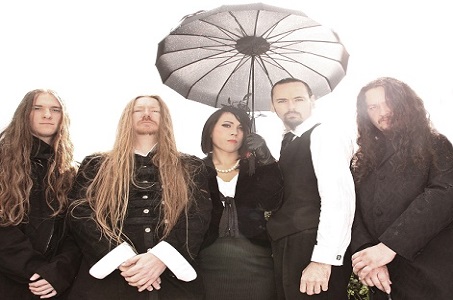 Our second go ‘round in 2011 with My Dying Bride singer Aaron Stainthorpe (here’s the first), this time focusing on the band’s startling new EP, The Barghest O’ Whitby. A 27-minute jaunt through the band’s legendary sorrowful doom lens, the EP pulls together everything the Brits are known for (drama, dreariness, doomy drudgery) into one song. Something like this would have been picture-perfect during MBD’s flawless formative years, where albums like 1992’s As the Flower Withers and ‘93’s Turn Loose the Swans ruled the roost;Barghest simply connects the dots between that era and the band’s matured present-day sound.

My Dying Bride’s doom universe is always awash with happenings, thus warranting Blistering to hit Stainthorpe up with another round of Q’s. And in his kind-hearted fashion, Stainthorpe was all too kind to respond. Have a go…

Blistering.com: This year could be described as your “fun project year.” Was it fun and/or invigorating to do both the Evinta orchestral album and EP in such a short period of time?

Aaron Stainthorpe: “Fun” is not really the word I’d use, but I get the point, it’s certainly been a weird one for the fans, which I’m sure they’ll enjoy. And hard work for us, but worth it. If you can still challenge yourself after all these years and consistently come up with the goods, then we must be doing something right!

Blistering.com: By doing both, did it make you re-think how the band approaches doing full length-albums?

Stainthorpe: No not really because LP’s are something to focus 100% on and you pretty much know what they entail. Evinta and Barghest could almost be seen as side projects in which we clearly flex our musical muscles without fear of ridicule or reprisal, a gift we allowed ourselves because “rules must be broken!”

Blistering.com: The Barghest O’ Whitby EP is your first real stab at doing one really long song. It feels epic, but it doesn’t feel too long or overstays its welcome. Where did the idea for this come from?

Stainthorpe: We are surrounded by history up here in grey old Yorkshire, which we have rarely tapped in to and so we decided to have a little look into some of the many myths and legends that many a Northern European area have in spades. I’d heard of tales of a great black dog (a “Barghest” it is called here) but none really set me on fire so I invented one, and why not? The initial lyric would suggest the hound is recklessly slaughtering its way through the populous at random, but between the lines a tale of vengeance can be found. This beast has a reason!

Blistering.com: During the making of this EP, did you have any flashbacks to your early death/doom days when long songs were the norm?

Stainthorpe: Only in the sound area. We fancied a stab at a much less polished and produced sound for Barghest to give it a more raw and unfettled feel, a bit like the early releases. The length didn’t really come into it.

Blistering.com: Shaun Steels rejoined the band for the EP. What brought him back into the fold? [Drummer Dan Mullins left the band in early 2011 – ed.]

Stainthorpe: Shaun has been helping us out a lot with the rehearsals for live shows as well as assisting us on the writing of new material (well, turning up and playing the drums) and so was the natural choice to record the EP. However, he cannot commit to live shows so we use David Gray from Akercocke for that, which seems to work quite well. Officially, we have no drummer!

Blistering.com: The EP and 2009’s For Lies I Sire have seen more involvement with violins. Will this be explored more for the next full-length?

Stainthorpe: Indeed it will I happy to announce, but we’re not going to milk it. It would have been easy and stupidly cheesy to fill the last LP with violins to really announce its return but we didn’t fancy that so it appeared on a few tracks as a support instrument, a bit like the keys do. It may be a little more prominent on the next LP, but it’s far too early to say yet.

Blistering.com: A lot of bands seem to be recapturing their early death metal spirit, but for MDB, it’s never totally gone away. Why has that been the case?

Stainthorpe: Because we love it! Most folks as they get older think the noisy stuff they loved when they were kids is no longer the right thing to do so move on to more mature grounds, which we have done a little of too, but we can’t help nipping back to the raucous sounds of death metal every once and a while if the music commands it. There seems little point in writing an aggressive lyrics and trying to sing it all moody when a damn good scream will do the trick!

Blistering.com: As the Flower Withers is going to hit the 20-year mark in 2012. What do you remember most about putting that album together?

Stainthorpe: Not a lot, we were a little tipsy on wine and fine German ale at the time because that’s what a young heavy metal band does when offered the opportunity to make an album. It was a lot of fun despite the darkness of the sound and we loved it.

Blistering.com: That album was recorded during the winter of ‘91/’92, so did your surroundings have any influence on the album’s outcome?

Stainthorpe: Oh yes, it’s bloody freezing here in winter (and most of the year too) but beautiful too out in the valleys and hills, and deeply inspirational. It sounds pretentious and twee, but I can often be found sat on a hill overlooking a forest in darkest Yorkshire with my pen and paper scribbling the outline to a potential song or poem – I love it! I can’t imagine what we’d sound like if we came from a hot territory!

Blistering.com: Playing a band’s “classic” album in its entirety is all the rage these days – will MDB ever take the plunge and play an album all the way through?

Stainthorpe: No, of course not, as it’s a clear sign that you’re not too impressed by all that came after that release. We do whatever the hell we like and try to avoid what everyone else is doing and that helps us to stay fresh and is probably why we still have one foot in the underground scene and barley another foot in the spotlight. Beautiful.

Blistering.com: Going a little further ahead, I’ve been playing The Dreadful Hours quite a bit lately and out of all the modern-era MDB albums, I feel it’s the most complete. What’s your assessment of it, 10 years after its release?

Stainthorpe: I’d give it 10 out of 10! It’s my favorite LP and I love giving it a spin now and again. It seems to have all the correct ingredients for a doom/death melancholic heavy metal album with overtones of misery, passion and desperation. “The Dreadful Hours” song itself is rarely off out our live setlist.

Blistering.com: I know you do some painting on the side, so have done anything lately with it?

Stainthorpe: Not much to be honest as I’ve moved into photography much more and with the use of Photoshop (yes, yes I know) I have been able to create visions of my twisted inner thoughts through that medium culminating in the cover of The Barghest O’ Whitby. Have a look at www.azzron.com for more.

Blistering.com: Finally, anything exciting planned for the holidays?

Stainthorpe: Err…no, to be very honest. I may have an ale with my father but that’s about it. 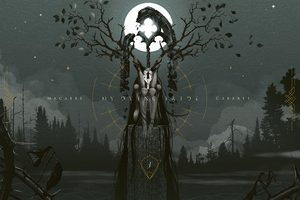