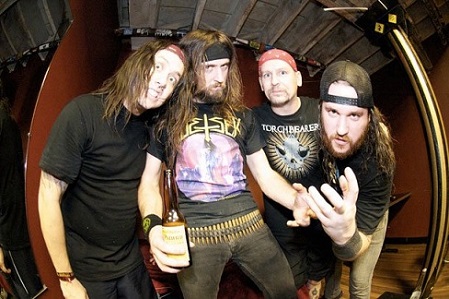 On a shockingly warm St. Patrick’s Day (there was no winter thaw this year), there stood tall and gangly Blistering and Municipal Waste guitarist Ryan Waste against a non-descript building near Pittsburgh’s Mr. Smalls Theater, conducting the interview in which you’re about to read. Multiple individuals passing by acknowledged the guitarist, and some even yours truly, but they just wanted a ticket to the night’s sold-out show, in which MW was direct support for GWAR. And no, we didn’t spring anyone for tix. We’ve conducted countless in-person interviews before, but never by a building while standing up, and never while wearing shorts (camouflage) in mid-March. Global warming, eh?

The calendar year should be a big one for the crossover thrashers. Their fifth album The Fatal Feast (Nuclear Blast) has received universal acclaim, and cemented the band as the preeminent crossover band of the modern era. Combined with MW’s fun and jovial persona (read: they like to party hard), they’re a viable alternative to the straight-laced, faux posturing we’ve come to know. It also helps they’re genuinely cool dudes, as we learned during our chat with the aforementioned guitarist…

Ryan Waste: Second day, so it’s going good. The first date was at home [in Virginia], so basically, this is the first tour date for us.

Blistering.com: You seem to have a pretty good relationship with GWAR, so that must come in handy for tours like this.

Waste: We went out with them in 2006 as a younger and less-experienced band, and they gave us the chance to work a bigger room. We cut our teeth on that tour, so to come back now as direct-support with world tours under our belt is cool, as is to come back and hang out with our friends

Blistering.com: You’ve put some miles under your belt on the road and you’re known as a live band, so that surely is a big plus when tackling big tours.

Waste: We don’t even get nervous for this stuff [laughs]. We took a year off from touring to write and record the new album, so we’re pretty refreshed and actually, pretty antsy to get back out.

Blistering.com: Last year was the longest break you’ve taken from touring. Aside from writing, what did you do to fill up your time?

Waste: We practiced five days a week when we were writing the record, so we were still working musically. Just being home with our loved ones was really cool, and everyone got to do their other projects. Everyone was doing music non-stop, so it’s not like we stopped doing anything musically.

Blistering.com: In terms of honing the new album with all of the practice you just mentioned…did you ever put that much practice in for a record?

Waste: No, never [laughs]. All of those records, as much as we love them, were more stressful and rushed. Which is just how we rolled. We used to get off the road, record, and then get back on the road with no breaks. This one was a huge difference and I think we’ll do this every time. It was so worry-free.

Blistering.com: I still think the album has a spontaneous feel to it, though.

Waste: This is our fifth record, so we know what we’re doing [laughs]. We sound like the Waste.

Blistering.com: I read somewhere that you junked some of the songs and riffs, so did that create any problems in terms of putting the album together?

Waste: Some of the songs are two years old. Like, “The Barfer” we wrote two years ago, so there’s stuff that was written right before the studio that was fresh, and stuff that we had been sitting on that got made over time. It’s a wide variety of stuff. I mean, the concept for the record is ten years old. We’ve wanted to do a “space” album ever since we started the band.

Blistering.com: The barometer for Municipal Waste has gotten much higher now. Not like you’re in a position where you can’t make any errors, but what’s the decision-making process behind which songs make the cut these days?

Waste: For the first time, we recorded more than we needed for an album. We recorded 21 songs and 16 made the record, so we’ll put those on other releases. I feel like everytime we try to outdo the last record. It’s never going to get any softer; it’s always going to get harder and faster with us. We just try to better ourselves…everyone will tell you that [laughs]. We were like, “Last record was Massive Aggressive, let’s make this more aggressive!” But we kept the humor in there and didn’t take ourselves too seriously.

Blistering.com: Well, with the last album, there was this big to-do over you not being a “party” band anymore.

Waste: That was for the press. We were sick of everyone dubbing us as that “party band” and asking us, “What was the craziest party you’ve ever been to?” and shooting silly string in our face for a photo shoot. We wrote a party record [2007’s The Art of Partying]…cool and I love getting wasted and partying, and I still do. The band is our job and we take it seriously, but we’ve been known as a fun band; we’re still the same band. We’re up there and having fun, entertaining.

Blistering.com: With metal, everyone has to be serious, you know?

Waste: We’re just down-to-earth – what you see is what you get. Offstage, it’s the same thing – we’re just being ourselves.

Blisteirng.com: Nuclear Assault’s John Connolly is on the new album. How cool is that?

Waste: We’re big fans, of course. You can probably here Nuclear Assault in some of our songs and it was just a matter of making a phone call. We met him years ago, we’ve been friends with Danny [Lilker, NA bassist], and they’re really cool guys. We put it out there and sure enough, he did it.

Blistering.com: It seems like with this new record and the promotion for it, you’re everywhere. That must come with being on Nuclear Blast, right?

Waste: We were out in L.A. and did tons of video, so now we have press things coming out every week. It was fun doing it. The thing that Earache (MW’s former label) would never do – and not to bash them – they’re letting us sell the album before it comes out. We have the album here for the tour. The leaks are coming from us [laughs]. The albums arrived on my porch at 7:00 AM and we were able to bring them to the first show.

Blistering.com: With five albums now, the setlist has to be a good problem to have. What are you thinking?

Waste: I’m a real stickler for the setlist. If I’m a fan, I want to see the whole era. We do about four songs off each record, but we’ll sprinkle in new ones. I think we’re doing about two tonight. There’s still a huge black for Hazardous Mutation…it’s like the songs we know that will go over well live. And we’re doing stuff off a Crucial Unit split, who are a Pittsburgh band. In Pittsburgh, people will probably dig it tonight. It’s from 2001 [laughs].

Blistering.com: Have you sampled the local cuisine here? Most people run straight to Primanti’s [a famous joint where sandwiches include French fries and coleslaw as primary toppings – ed].

Waste: Most of the time we have people bring us food, but we haven’t been able to head out, so we hit up this dude with the crazy moustache outside of the venue for burgers. He makes all of his own hot sauce and I’m a huge hot sauce connoisseur and he made me the “Hell Burger,” so I just had that. I don’t know how “Pittsburgh” that is.

Blistering.com: In Pittsburgh, salads come with fries on them.

Waste: We were just talking about that on the tour bus! And they put coleslaw on fries and everything. I can get down with that.

Blistering.com: Do you eat before you go on?

Waste: I eat all day [laughs]. I love eating. Sometimes I’ve eaten chicken wings right before we’ve gone on. My hands are so greasy, I can play faster. 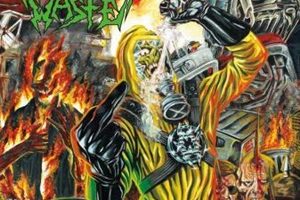 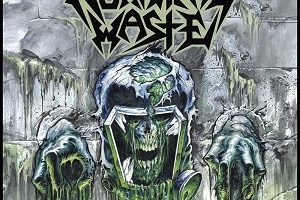 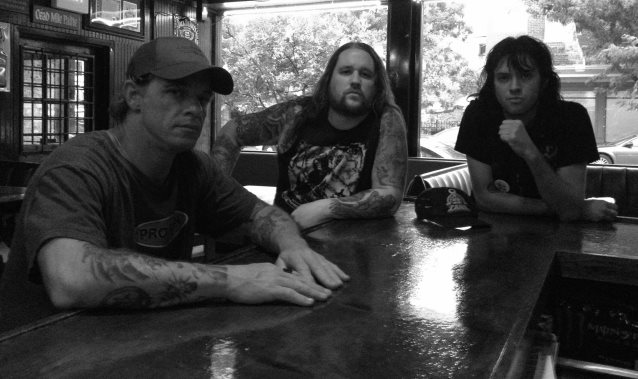 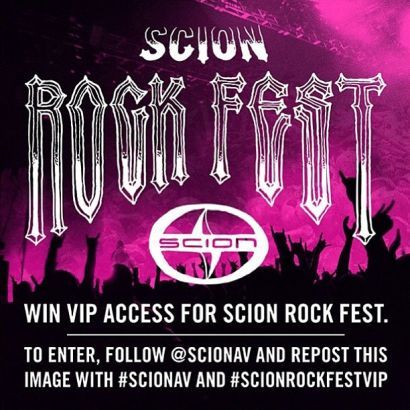