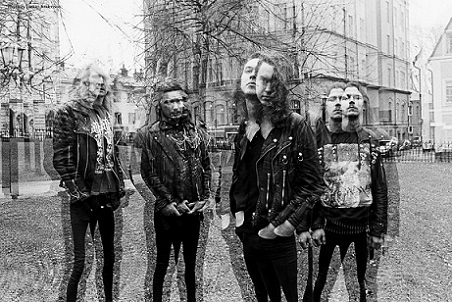 Aptly described by our own Daniel Keating as “somewhere in the realm of progressive death metal institutions Atheist and Edge of Sanity,” Sweden’s Morbus Chron are in the rare position of being able to push death metal forward, not backward like so many of their contemporaries seem inclined to doing. Their new Sweven (and first for Century Media) goes from strength to strength, as obtuse, warped riffing make steep climbs, all in the context of digestible, wholly intoxicating songs. And while some of the band’s ideas are certainly beyond spatial dominions and unorthodox (there’s your EOS pun for the day), they’re about as memorable as anything to hit the boards in 2014, most notably cuts such as “Chains,” “The Perennial Link,” and most notably, “Towards a Dark Sky.”

Good press and/or vibes is going to the be the norm for the Swedes during this album cycle, so never wanting to feel left out, we grabbed guitarist/vocalist Robert Andersson for a chat regarding Sweven, its Sleepers in the Rift predecessor, and much more. Read on…

Dead Rhetoric: To start, Sleepers in the Rift did all sorts of good things for the band, but above all else, it established you in the death metal scene. Looking back upon the creation of the album, are you pleased with how it turned out?

Robert Andersson: I think Sleepers in the Rift stands out as one of the more authentic-sounding revival albums. We were really young when we wrote those songs. Some of them were written when I was 16. It’s filled with adolescent charm and packed with a “fuck off”-attitude that is so essential in doing the style justice. It was released just at the right time and people took it to them in a great way. In the end, it served its purpose as an homage to our favorite bands and made a name for us.

Dead Rhetoric: While Sleepers came out when the retro death metal boom started to happen, it managed to stand out. Why do you think that is?

Andersson: I think it’s because it sounds so authentic. We never took any instrument classes. We learned our instruments playing death metal. It’s what we knew and still know. When it was time for us to write our first album, we had nothing else in mind but to do the ultimate worship album of the 80’s death metal scene. Our skills were lacking and we just wrote the most evil weird riffs we could. It ended up sounding like the real deal. An album that could have been released in 1989. I think a lot of these revival bands try, but end up sounding like modern versions of old bands. We stood out because we really captured some of that essence that made those old bands so special.

Andersson: Lately I’ve been trying to rid myself of any boundaries or rules and allow myself to write whatever I want. I’ve been able to grow a lot as a song writer just by removing the old restrictions I’ve lived by. Not being concerned about a riff not sounding death metal enough or if a melody is too beautiful. If we enjoy it, it fits the bill. That way I’ve been able to put so much more of myself into a song, and naturally it ends up sounding different.

Dead Rhetoric: Hooking up with Century Media – how did it happen?

Andersson: Just after the release of Sleepers in the Rift, we were contacted by Century Media. What happened was that Jerry of Detest Records had started working at the label and recommended them to check us out. We had just finished our deal with Pulverised and felt that it was a perfect time for us to try our wings somewhere else.

Dead Rhetoric: Once again, you went with some eye-catching cover art for Sweven. Who’s responsible for it, and what’s the concept?

Andersson: The same guy that has done our covers since the first album, Raul Gonzalez. The whole album is built around the concept of dreams. Basically the feeling that you don’t belong in this world and the moments of liberation our dreams present to us. We sent him the lyrics and the music and asked him to illustrate the whole album. There’s an art booklet that comes with the record, one painting for each track. It’s really something else.

Andersson: Those things have nothing to do with the album we’re releasing. So, naturally there with be a lack of zombies and graves. That’s not saying I don’t appreciate that stuff anymore. It’s just that right now with Morbus Chron, I have other topics I’d like to focus on. It’s as simple as that.

Andersson: The whole Acts of the Unspeakable-painting is one of a kind. Also, the Retribution for the Dead-cover is great. Basically anything Autopsy ever did, including Shitfun. If we’re talking Death’s cover art, I prefer Scream Bloody Gore and Leprosy. Leprosy is just bizarre. I like weird coloring. We’ve also always been fans of Dan Seagrave. All the classic Swedish covers, Left Hand Path, Clandestine, Like an Everflowing Stream, Dark Recollections. It’s hard to pick one, ha-ha.

Dead Rhetoric: As for the new album, you’ve introduced some new elements, some of which are progressive. What brought on this change?

Andersson: Like with any band that values their creative freedom, progression will sooner or later knock on your door. After we had released Sleepers in the Rift, we knew we wanted to explore new territories and take our sound further. We could never have released another album in the vein of the first. So, we set out to write whatever we wanted, not caring at all what was expected from us. There was never any real discussion about how we wanted it to sound, it just turned out this way. We haven’t started to listen to a bunch of progressive bands either. The changes in our sounds aren’t really pulled from new influences, but rather from the lack of influences. It’s more of our own ideas this time.

Dead Rhetoric: You worked with Fred Estby on the recording of the album. What’s it like working with such a well-versed death metal veteran?

Andersson: It’s always great to work with him. It’s our second visit now since we did the last EP there as well. Going in, you know what you’re getting. It’s a certain sound that both him and Nicke go for. A sound that works very well for us. We agree on a lot of things and share the interest for death metal. It’s important to have that musical connection. He tends to know what we’re after.

Dead Rhetoric: For you, what’s the most satisfying aspect of being in an emerging death metal band?

Andersson: Basically, having a creative outlet. That should be the big reason why anyone would want to play in a band. At least that’s all that matters to me. I know we’re blessed to have people listening in and enjoying it, but the reason why I’m doing this is because I have music that needs to come out. Anything else is just a bonus.

Dead Rhetoric: Given your Entombed connections, have any of those guys doled out some advice?

Andersson: Other than Nicke being Edvin’s brother, we have no connection to the band Entombed. So, that would be a no.

Dead Rhetoric: Finally, what’s on the agenda for 2014?

Andersson: We’re going on our first ever tour in March with Necrowretch. A couple of shows through Europe. There’s not much planned other than that. We’ll see what the future will bring.