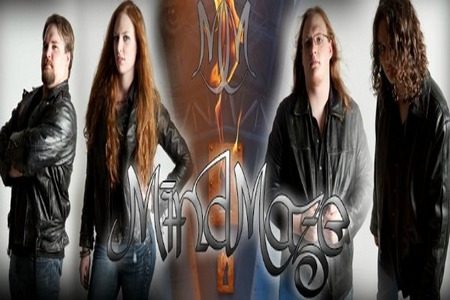 Dead Rhetoric: You and your sister attended the 2014 edition of ProgPower USA – now that you’ve had time to decompress from that whirlwind weekend, tell us the good, the bad, and favorite moments that are burned into the brain?

Teets: Wow, yeah. It was an unbelievably ridiculous couple of days. I’m only 24, and I’ve been aware of Progpower since the time I was 16. Due to my age and financial situation, I couldn’t go. Simply the fact that we did it was a huge deal to me. We decided that it wasn’t just a vacation for pleasure, but a networking opportunity. We were featured on the sampler CD, got an ad in the festival program, and made our presence felt. We had people that love what we do that decided to wear MindMaze t-shirts on festival nights, there is a buzz going on in that community about us. They announced the next year’s roster and all these people thought we were going to be on the bill that was so bizarre for me. People asked for pictures with us; the single coolest thing was the singer Michael Eriksen from Circus Maximus was there, and Sarah and I did an acoustic version of their song “From Childhood’s Hour” on YouTube, he had written to me a few years ago about finding it and liking it. He actually came up to us and he wanted to take a picture with the two of us, that was the coolest thing. The biggest pro and con thing in the festival for me is the total transparency with bands and fans. In a lot of ways it’s a great thing, and for certain bands it made my love and appreciation for them grow so much more; but you do occasionally see things when you are that up close and personal for several days in a row you see all sides of them, not what they want you to see.

(The other thing I wasn’t prepared for was) exhaustion, plain and simple. You can’t be prepared to see and do that much in that short amount of time.

Dead Rhetoric: You enjoy the art of record shopping when you visit various territories of the United States either on tour with MindMaze or when you make your own road trips for special shows. Let the readers know about some of your favorite places to visit, and best scores/gems along the way?

Teets: All-time favorite has to be Vintage Vinyl in Fords, New Jersey. Pretty much anyone who has ever been there definitely knows why. It’s just huge, their selection of quality metal discs is unbelievably unparalleled. Top tier for what is out there, and their metal section alone including thrash, power, progressive, traditional styles – everything in that spectrum is bigger than your average FYE store. I cannot go there without having a list. I’ll browse all the used discs because you never know what you’ll find. Otherwise I could be in there for 4 hours and end up feeling like I didn’t look at everything. A favorite of ours from travelling for shows is Eide’s in Pittsburgh. They had more quality new progressive metal releases than I was expecting. You can drop $100 there easily on a trip, I couldn’t believe what I was finding.

Not being place specific, one recently that thrilled me to find was the Anubis Gate album The Detached, which is out of print now. Their first four albums are out of print, and you can’t get them anywhere, they may re-issue them. Some of their albums will sell for $50-$60 because of this, I found it in FYE so I got it for $7.99, and I could have easily sold it for 5-6 times what I paid for it. That was exciting to find. I’m not super into collecting rare stuff; I just want to own stuff because I love the band.

Dead Rhetoric: What are some of the things on your bucket list that you’d like to accomplish: be it within MindMaze, music in general, or lifelong personal interest goals?

Teets: The generic, naïve answer is to say we want to take this as far as we possibly can. I know there is a ceiling on this as far as popularity, a band like Symphony X or Primal Fear’s popularity that would be incredible. Maybe actually make a living at this, realistically though, who knows. It’s so hard for newer bands, there haven’t been many bands in our general bracket of music to come up over the past 5-10 years that broke out of being a big fish in a small pond to graduate to the big leagues. I think Seven Kingdoms is one of the bands that is actually in the process of doing that, and we just played with them recently in Florida. They have now gone to Europe several times, a support tour with Stratovarius and Amaranthe, a double bill tour with Manticora. Europe is a big thing for us to look to do in the next year or two, that’s why I’m happy to work with a European label. We see it as an attainable goal. We want to do more touring, any real touring. We do 2 show road trips for the weekends, we don’t have a ton of money to risk and put together a tour on our own. We want to get experience as tour support for a band, a little bit more of a built in audience. Keep making more albums and striving to do better things, doing what we can to increase our fan base.