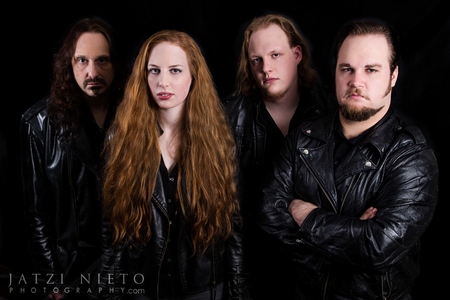 Dead Rhetoric: You’ve consistently played out on local band bills and traded shows with other acts of a similar stature as yourselves, and also opened for some national acts like Saxon, Primal Fear, and in May of 2013 – Mötley Crüe. I’m curious to know how the latter event went for you, playing for thousands on a bill that may seem to some a possible mismatch in styles…

Teets: (laughs). Yes that entire experience can be summed up as kind of a mixed bag. First of all, not to downplay the importance of it, when we opened for Mötley Crüe they were doing a little wind down to start their Vegas residency thing they did for a while last year. They were playing smaller venues than normal- it wasn’t a big amphitheater, it was at an event center that’s been built in our area over the past couple of years. I don’t have an official head count, the capacity for the center is about 3,000, I think if I were to guess we played in front of about 1,500-1,800 people, which is obviously not something to down play or short change whatsoever.

It was the greatest thing ever but in a way kind of not. I don’t want to elaborate on this forever, in a nutshell what it proved to us as a band is we knew that we had it in us to perform on that level which is something we were very nervous about. You can play a million shows in a tiny little club on stage that just barely fits the band on it and feel very entertaining, but not every band can translate that energy and presence to a much larger stage. Not just the entertainment value, but the performance itself; we were nervous that this was going to be a train wreck because no one had the experience to play in front of that many people. We walked away from the thing feeling like we knocked it out of the park. It was one of the best sounding shows we ever did- having monitor techs and professional sound makes a bigger difference.

We were selected from a pool of over 100 bands to do this, it was narrowed down to a half dozen and then Mötley Crüe’s management made the final selection. The mismatch thing, we felt the kick back of that. When we were on stage, we thought things went really well. The people that we could see near the stage seemed to be into it. We thought we would sell a ton of merchandise and our presence in the regional area will get better- in reality it didn’t do any of that for us. It wasn’t helped by the fact that we had to price match our merchandise to theirs. We normally would sell our CD’s around $14 and t-shirts around $20 or something like that, we had to sell our CD’s for $20 and t-shirts for $40, it destroyed a lot of incentive to buy our stuff. Their demographic musically is a bit different than what we do, they are a band with a lot of songs in rotation on the radio. The audience will see an opening band, say something to their friend about it, but they aren’t dying to support that band and go to our local gigs.

In contrast when we did the shows opening for Primal Fear and Saxon, we had way better responses even if the crowds were much smaller, and we sold more merchandise. The more underground metal community, they want to stay in touch with us, a lot of people we met at those shows ended up coming out to more gigs and contributing to our crowd funding activities. We felt like we accomplished something at those gigs.

Dead Rhetoric: MindMaze is another act that has run successful crowdfunding campaigns to fund band activities. It is a very polarizing topic these days – where many believe it’s a hand out situation while others believe you are getting special opportunities from the band (be it fan access, special merchandise, etc.) in exchange for their money. How have you been successful when hundreds of others fail at this?

Teets: On the subject of crowd funding being controversial, my thought process on this has always been: no one is forcing anyone to do it. If the band does it the right way and people see value in it, it will be successful. If people don’t, then it won’t. There’s no reason to be mad or upset- I feel like the bands that don’t do it correctly their projects end up not being as successful as they could. You need to be true to your own set of ethics. For me a big thing is, I don’t look at crowd funding in the way we do things as a free money, hand out scenario. The way our pledge levels are set up is similar to the prices we would charge when it’s available to the public. We use it as a pre-order. I don’t think you should price fans out to get them involved at the bottom level. I’ve seen a lot of bands not give me an option to order the CD for $15, at the end of the day most of your fans aren’t superfans and would like a copy of the album. Those pledge levels for us have always been the most successful. I am not comfortable letting someone pay us to buy in some form of creative control over the final product. We are going to do what we want to do- if you want to get on board and support us, I’m thrilled. You want to make people feel like they are valued and an important part of the bigger picture. We wouldn’t have the money to do this without them.