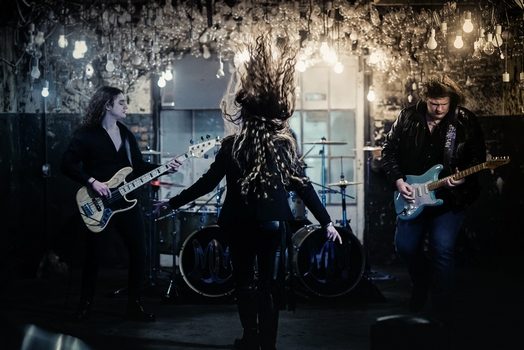 Dead Rhetoric: Were there any particular songs that were a bit more challenging than others for this record?

Teets: In every regard imaginable, the album spans such a wide variety of styles compared to our previous stuff. Vocally in particular, not only did Sarah have to do a lot of really higher pitch stuff, both in aggressive metal singing and the more emotive, ballad stuff. There are also a lot more quiet sections on this album, there are a lot of parts where there is just singing against an acoustic guitar or piano. And with those really dynamic sections, vocals really count. Not that they don’t ever not count, but when they are so naked like that it’s so important to get them just right. So honestly those sections took longer than anything else, just to make sure the vocals were perfect so we just kept redoing them, not because they were bad but we wanted to make sure that every nuance was right. There is stuff like that for all the instruments on there. There is a 90 second instrumental on this called “Sanity’s Collapse”, a bridge between the song before and after that. The chart that I had to write up to detail all the parts and time signatures changes was longer than the charts we’ve had for complete songs in the past. Just because there were that many arrangement changes in the span of 80 to 90 seconds of music.

Dead Rhetoric: Swedish artist Carl-André Beckston handles the artwork again for the band – how does the process work in that regard record to record, is it a collaborative process between the band and Carl, or do you trust his ideas and vision? Also, what do you consider some of your favorite works of cover art in the metal realm?

Teets: In the past it was a little bit more open where I would give him… he would ask for the lyrics to whatever the title track would be for that album, and a short description of what it was about, as well as some rough tracks as we were making the album just so he could listen to stuff and get in the headspace of what we were creating. I have never given him guidelines, I really love his style and I have so much faith in him as an artist, I don’t really have to worry. This time around, it was more hands on and we sent him the lyrics to pretty much every song on the whole album, as well as a couple of paragraphs detailing the whole concept and what an individual song was trying to get across. It was more of a back and forth- he’s really good at burying all these nuance details in artwork which is something I’m a big fan of. We had him do the artwork and the layout for the entire package this time- he did the booklet, tray card, disc- in the past he would only do the album covers and Sarah would do the layout because she does graphic design work on the side.

Obviously as someone who loves artwork, and Iron Maiden as my favorite band- I’m obligated to mention their artwork. I think they are the pinnacle example to use artwork to define your band- establish a brand. They’ve never abandoned their style, they’ve experimented with it a little bit but they have the continuing theme of having Eddie there, and the way it varies album to album based on the theme of each particular record. That’s the pinnacle example of what artwork can really do for your band.

Dead Rhetoric: Can you share with the readers how you feel MindMaze has grown in the live circuit through your touring runs, including the chance to open for Saxon and Armored Saint in the fall of 2015? Did you gain any specific takeaways from these veteran artists that you have been applying to the band professionally or musically?

Teets: There’s absolutely no question that doing that tour was a huge thing for us in a number of ways. One, we had a lot of friends and fans locally that went a few months without seeing us because of that tour and not playing locally – when we started playing locally again, they noticed that we were more cohesive and tight live. The stage energy is elevated, and everything about the performance seems to have grown. I would totally agree with that- there’s a certain bond and tightness you get from playing every night consecutively that you are just never going to get even practicing every single day, it’s not the same as playing live. Only touring can give this to you.

As far as the bands themselves, I don’t think we could have picked two better bands to do this with. Maybe they are a little more traditional, old school metal than we are, but in terms of the live performances both Saxon and Armored Saint are as live as you can get, no backing tracks, no weird stuff like that, and we don’t use that stuff as well. I thought most people responded well to us because it was just a really good package of bands, it made a lot of sense – sometimes you have great bands touring with other great bands but it doesn’t click right or the audience doesn’t really get it. Both bands were great towards us – we were very sad when the tour was over because it wasn’t terribly long but we got close to them. We’ve stayed in touch and it’s really cool to have all of those guys as friends, and it’s no question that that tour did a great thing for boosting our visibility. We picked up some real serious fans from doing that.

Dead Rhetoric: You are coming up on the fifth anniversary of MindMaze as a band. When you reflect back from the beginning to now, what milestones are you most proud of, and how do you see yourselves in terms of where you are career-wise? Do you think about how the next three to five years could be?

Teets: You know, it’s funny because I’ve actually been thinking about this myself. Sometimes it’s a little dejecting because the industry is kind of a weird industry, so it’s hard to really know where your band stands and what you’ve really accomplished. Especially on a day to day level, when you have spent a long period of time away from playing regularly, which we have now – it’s hard to feel that sense of accomplishment. When I look back and think about what we’ve done in just five years – I’m honestly kind of shocked. We’ll have released three albums in addition to touring with Saxon and Armored Saint, opened for a slew of other bands, Mötley Crüe in 2013, Evergrey, Primal Fear, Doro, Udo Dirkschneider- and it’s crazy to think about the fans that we’ve made and the fanbase we’ve developed. I’m very happy with where we are at in five years and it does make me feel a little curious where we might be three to five years from now if things keep developing at the rate they’ve been going.

Dead Rhetoric: If given the opportunity, where would you like to see changes regarding the state of the metal scene if you had the power and resources to improve or modify things?

Teets: (laughs) This is definitely a complex question. It’s hard to narrow it down to one thing. In general, when it comes to bands themselves, if there was less pettiness and stupid cliqueness with bands, that would certainly be good. Certain areas are worse than others- we’ve really been accepted into some areas, and people seem to like us and support us, it makes me feel like I want to give something back. Other scenes it feels like the bands are weirdly territorial, or when you have a band like ourselves where three-fourths of the band are in their twenties, we aren’t as old as other bands so there is an ageism thing that happens sometimes. I think the ageism thing is more of a big deal for us than sexism is- because there are so many female-fronted bands now and we have played with many of them, that doesn’t seem like a deterrent for most people.

On the level of the public and fans, I just wish more people would go to shows. There are a lot of people that have this attitude where when you announce a tour, ‘oh it’s a little far for me’. And you are only playing 40 minutes from their house. I understand that if we are playing locally, there will be another chance- but we just announced this 19-date tour that is taking us to the West Coast, and we are playing in Oakland, California- which is right across from San Francisco, and somebody who lived in San Francisco said ‘I wish you were playing in S.F. instead of Oakland’. There’s a sense of entitlement with certain people who think every band in the world should play in their backyard on a Saturday night, and it’s not possible. I get it to some degree- life happens and distance effects whether I go to some shows- but I don’t act like the band owes it to me to play within a certain distance of my house or on a certain night.

And lastly sort of on the promoter side, when you come in this scene- fortunately we don’t have to deal with this anymore, but to get good gigs you have to sell tickets to open for bigger bands. Some promoters are well meaning about it, but it creates this bad atmosphere. It encourages promoters to not do any work, and places it completely on the band. I believe bands should work to promote, it’s not only their job and a lot of third party club promoters will in effect do nothing and take the lion’s share that the show makes. We’ve met some people who are huge exceptions to that rule- which is one reason why we keep going back and playing certain venues over and over again. It should be based more on the merit and the music quality of the bands, not how many tickets you can sell – because it ends up being a case of how many tickets is the band willing to buy. There are a lot of bands who do that circuit of opening for people, and pre-buy all the tickets. They’ll ask the venue how many tickets they need to get the direct support slot, and if the venue says 50 tickets, they’ll just buy them. We’ve never done that and we never will, I just think it’s shady. 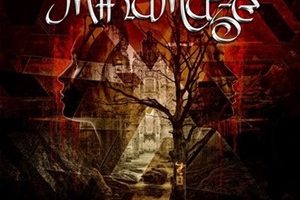