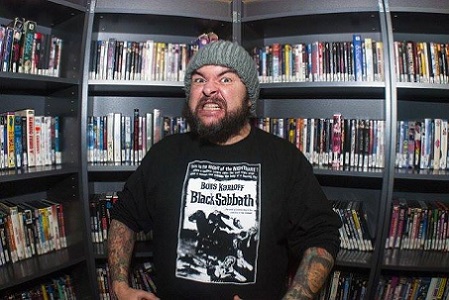 Long-time bedfellows, metal and cinema have appropriately been knocking boots since Black Sabbath swiped their moniker from a 1963 Boris Korloff flick bearing the same name. Then, it was purely a horror connection, meaning there is a high probability Ozzy, Iommi, and gang never saw such fantastic one-liners like “But this goes to 11!” or “Heavy metal rules! All that punk shit sucks” coming to life. (Or better yet, “My lifestyle determines my deathstyle.”) Granted, those are three of the more high-level offerings from this pantheon (This is Spinal Tap, Heavy Metal Parking Lot, and Some Kind of Monster), so someone finally had to dig deep and compile the be-all, end-all compendium of metal and movies intertwined. Enter noted freelance journalist Mike “McBeardo” McPadden.

McPadden’s book, Heavy Metal Movies (Bazillion Points), chronicles virtually every connection between cinema and metal known to man, from documentaries, classic horror flicks, apocalyptic happenings, and everything else in between. An exhaustive, all-encompassing tome with fantastic visuals and presentation, the amount of man-hours McPadden put in must be incalculable…right?

“I worked on Heavy Metal Movies every single day for three-and-a-half-years, some days more than others of course, but, still, every single day,” he begins. “My wife appreciates when I stress that. Given the time I spent watching movies, taking notes, and then writing reviews, let’s say that’s five hours per day, so over the course of 1,300 days that adds up 31,200 hours. Holy Stromboli, that’s a lot! Thanks for asking the question, otherwise I never would have known. Wow.”

The idea for the book germinated when McPadden contributed two lists to Eric Danville’s mandatory 2009 Heavy Metal Book of Lists: The 13 Greatest Heavy Metal Horror Movies of All-Time, and the 13 Most Metal Scenes in Non-Metal Movies, both of which got the ball rolling. “The full-blown flowering of the idea hit me at Quimby’s Bookstore in Chicago—one of the city’s true jewels—as I thumbed through the amazing, essential book Destroy All Movies: The Complete History of Punks in Film, edited by the mighty Zack Carlson and Bryan Connolly,” relays McPadden. “I said to Liz Mason, who runs Quimby’s, ‘I’m going home to pitch the heavy metal answer book to this, and I hope Bazillion Points will go for it.’ And that’s what happened.”

McPadden’s work at Esquire, New York Press, and ahem, Hustler, is supplemented nicely by his ins-and-outs knowledge of metal, of which is executed in fine detail across Heavy Metal Movies. Therefore, it’s no surprise McPadden caught the metal bug early in his development in 1975 via a common starting point: Kiss.

“I was seven years old and they TERRIFIED me,” he says. “Naturally or unnaturally, I wanted more. Growing up in Brooklyn in the ’70s, I was exposed to and drawn to punk very early on, and fell in love with the Ramones by age ten. To me, they were of a piece with Kiss, as were Van Halen and Cheap Trick. It was all just rock, but I felt a kinship with punk aesthetics and sensibilities, even as a little kid. By 1982, when I started high school, though, kids in Sex Pistols and Black Flag shirts seemed overwhelmingly to be ‘new wavers’ who were actually listening to foo-foo shit that disgusted me like Depeche Mode and the Cure and Spandau Ballet. Yecch! So I focused my attention on hard rock and heavy metal and, given the time, it was a fruitful area of research.” 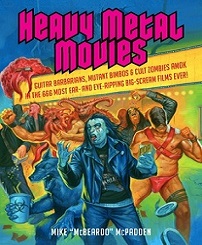 Accumulating such a wide swath of movies for inclusion bore some obvious choices (see above), and, some not-so-obvious choices, which was perhaps part of the allure for the whole project for McPadden. Finding unlikely connections, lost nuggets, and dusty cult classics forced the writer to dig deep into his network of connections, which in turn, resulted in a veritable domino-effect of one movie connecting to metal, to another movie connecting, and so on.

“Two standout discoveries center on ‘lost’ movies,” he notes. “One is Biceps of Steel, a film directed by Julien Temple centering on the New Wave of British Heavy Metal band Samson, which featured Bruce Dickinson on vocals pre-Iron Maiden. Snippets of the movie turn up in the 1982 horror-mystery, The Incubus. A short version of Biceps eventually got some kind of release in 2003, but the full version was never completed.

“The other is Angel at Midnight, an elaborate, full-blown 1977 concert film starring Angel, who dressed in white and were sold by Casablanca Records as the flip-side to their scary, fire-breathing label mates Kiss,” he continues. “It was meant to cash in on the success of Led Zeppelin in The Song Remains the same, but the public just kept rejecting Angel, so Casablanca cut their losses and discarded the movie. Finally, the band turned up in a concert scene in the 1980 teen drama Foxes, starring Jodie Foster and Cherie Currie. Still, some version of Angel at Midnight, which was once considered for Laserdisc release, is sitting in a vault somewhere. I exhausted every resource I had trying to track down a copy of the movie. Nobody, and I mean nobody, I came across could find it.”

Perhaps most intrinsic to the metal audience of today is Metallica’s much-debated 2004 documentary, Some Kind of Monster. Rightfully included in Heavy Metal Movies, Some Kind of Monster catches Metallica at their most vulnerable, precariously close to having the wheels fall off altogether. For some, the documentary is means to flog the well-flogged, aging body of Metallica, while for others, like McPadden, it was a bold move.

“Some Kind of Monster is a great film, he says. “I commend Metallica for putting it out, knowing full well that they come off as spoiled, clueless, egomaniacal brats—well, two of them do at least… and it’s not Kirk Hammett, Jason Newsted, or Robert Trujillo, I think the candor of letting us seem them look so terrible planted the seed of Metallica’s ongoing efforts to make peace with its fans since then. I absolutely loved last year’s 3D concert movie, Through the Never.”

With another tome already in the pipeline (“Another movie book, focused on a very particular genre from the 1970s and ’80s.”), McPadden figures to be knee-deep in the VCR and obscure DVD-land for the foreseeable future. However, not making additional mention of Heavy Metal Parking Lot would be a mistake, further driven home by the fact McPadden disagrees with DR’s assessment the movie made a lot of metal folk look a bit on the trashy side.

“I have to strongly disagree about Heavy Metal Parking Lot making metalheads look bad,” he finishes. “And I mean, strongly. To me, that movie is pure joy. Every single second is its own highlight. What we see on screen in Heavy Metal Parking Lot is teenagers liberated from school, from work, from their parents, from responsibility, communing over their love of the music that makes them feel free and alive, and doing what teens do when they’re happiest—getting drunk, getting high, getting laid, and running wild. To me, HMPL perfectly captures and conveys the ecstatic, dangerous bliss of discovering and giving yourself over to heavy metal.”