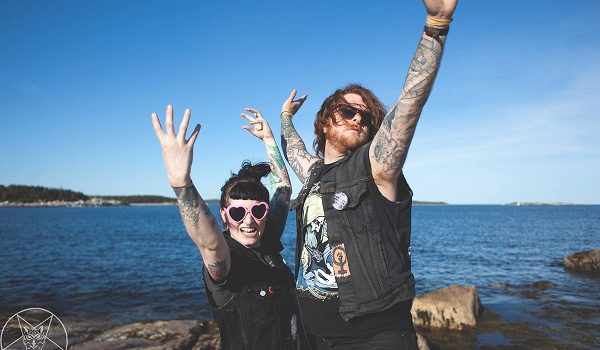 The May 2018 installment of Rapid Fires –our short review column– gets us closer to putting an end-cap on the first half of the year. The metal world moves pretty quickly, so we do our best to keep up, in this case, checking out the likes of Aeren, Angel Heart, Borgne, Burden of Grief, Coiled Around Thy Spine, Evil-Lyn, Ghostbound, Grave Upheaval, Hatred Reigns, Inhuman Remnants, Jollymon, Madhouse, Mordor, Primitai, and Vile Creature (pictured). 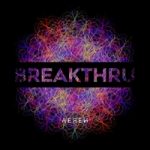 Aeren – Breakthru (Sliptrick Records)
While Breakthru may find itself a bit too ‘mellow’ for some as it falls more into the rock category than metal, one listen is sure to prove that the band has some potential to them. Some wispy melodies and vocal lines gain some momentum by siding with some heavier guitar riffs and keep the dynamics in check. With some catchy and playful musicianship going on (see “Breath of Air”), it’s more than a superficial gloss. There’s some clear depth to the material – something that fans of more ‘brutal’ material can still pick up and appreciate if in the mood for something else. – Kyle McGinn (Aeren on Facebook) 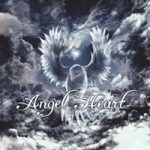 Angel Heart – Angel Heart (Mighty Music)
Forming out of the remnants of Highway Glory who released three albums in their decade-long career, Angel Heart is more in that Norwegian symphonic, melodic hard rock vein on this self-titled debut album. Larger than life choruses, catchy musical hooks, and solid songwriting mechanics along with the enchanting voice of Trine Elise Johansen draws comparisons to Within Temptation if taken into an 80’s melodic hard rock vein. “Forever Free” has a bit of that cultural kick in the keyboard/guitar syncopation, while epic 7:40 closer “Sailing Against the Wind” contains all the build-ups and transitions you would hope for in a dramatic conclusion. Just wish the record had a stronger drum presence, as this aspect feels very distant for the proceedings – otherwise Angel Heart are off to a decent start. – Matt Coe (Angel Heart on Facebook) 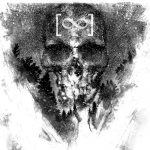 Borgne – [∞] (Avantgarde)
Swiss black metal leaders Borgne has assembled a healthy, if not impressive discography over the years, led by 2012’s Royaume des ombres. Their experimental, cryptic brand of black metal has constantly risen above and moved around trends, which explains why their newest, the simply titled “[∞]” is equally as challenging. With a wide of array of samples dotting each of the songs, Borgne manages to create a daunting, futuristic atmospheric, taking the plunge from any which direction, but always ending up in the same twisting, turning spot. – David E. Gehlke (Borgne Facebook) 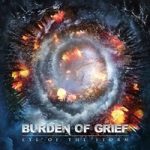 Burden of Grief – Eye of the Storm (Massacre Records)
Traversing the melodic death/thrash platform, German band Burden of Grief return for their seventh studio record, the appropriately titled Eye of the Storm. Sharp, intuitive rhythms and twin melodic accents beyond the proper musical hooks, transitions, and blistering vocal performance from Mike Huhmann makes for mandatory, incessant headbanging cuts like “Wolf Moon” and “Maze of Absurdity” that reflect a love of older In Flames, Dark Tranquility, and a bit of that Teutonic traditional/ thrash guard. Quality material and execution should give Burden of Grief a leg up on the competition – if you’ve missed that early 90’s sound with a bit more sophistication, this record should be a highlight of these genres to make your year. – Matt Coe (Burden of Grief official website) 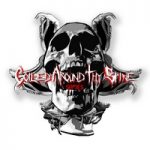 Coiled Around thy Spine – Shades (Self-Released)
Hearing a description of melodic death metal is usually enough to pique the interest enough to check it out, which is where Shades comes into play. “[God Mode: On]” kicks things immediately into high gear, with blazing, technically impressive riffs that keep a solid level of catchiness to them, and follow-up “Dissected” veers towards more melodic arenas. The set-up holds, going in either direction, for the remainder of the album. It’s not the most original output, but it’s full of energetic and juicy melodeath that fans of the genre will enjoy, without a doubt. – Kyle McGinn (Coiled Around thy Spine on Facebook) 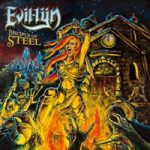 Evil-Lÿn – Disciple of Steel (No Remorse Records)
Starting in 2007 and releasing an EP and single over the past decade, Finnish band Evil-Lÿn finally gain a deal with No Remorse and unleash their first full-length for Disciple of Steel. Throwing down a familiar brand of traditional heavy metal, expect catchy guitar refrains, steady pounding drums and vocal melodies made for audience supplementation. Iron Maiden, Omen, and Motörhead are three obvious reference points taking in winners like “Hellfire” and the moodier semi-ballad “Shadow Soldier”. These gentlemen live for leather, studs, and steel – as if the 80’s never went away. Another album or two in this vein and proper festival billings will cater to Evil-Lÿn, as they certainly rock. – Matt Coe (Evil-Lÿn on Facebook)

Ghostbound – All is Phantom (A Sad Sadness Song)
A label that specializes in depressive, forlorn black metal, A Sad Sadness Song (a sub-division of ATMF) doesn’t have many bands like Ghostbound, but perhaps that’s the point. An otherwise progressive, but arty outfit (think Vulture Industries peddling away with Opeth), the band’s All is Phantom may be a little long in the tooth, but the hummable nature of these tunes is hard to resist. Perhaps it is mainly because of singer Alec A. Head’s easy-on-the-ears vocals, but either way, this is a rather deep, challenging release, emblematic of the band’s label and progressive rock roots. – David E. Gehlke (Ghostbound Facebook) 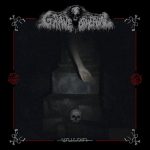 Grave Upheaval – Untitled (Nuclear War Now Productions)
Album titles, let alone song titles appear to be of no matter for Grave Upheaval, who, after a five-year break from an album called “Untitled,” return with another album called “Untitled.” Deliberations over titles and what-have-you aside, Grave Upheaval (who hail from Australia) play a cryptic, from the deep depths style of death metal that thrives on uneasiness. Those craggy, molten riffs are here (as they should be), simply adding to mystique behind a band who is the near-perfect representation of abyssal death metal. – David E. Gehlke (Grave Upheaval Bandcamp) 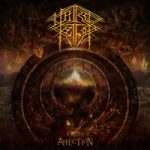 Hatred Reigns – Realm I: Affliction (Self-Released)
Serving up their first taste of Canadian brutal death metal (with plenty of technical leanings to it), Hatred Reigns hit the ground running with this short, 3-song EP. Bulldozer-strength brutality a la Hate Eternal combines itself with a more intricate ‘Canadian’ outlook to technicality (think Cryptopsy) and manages to come up with the best of both worlds. The blunt heaviness and often frantic explosions of riffs are tickled by technicality and keep them interesting without going too far overboard. Toss in some grooves to bite into and this is an enjoyable romp that you are sure to return to for plenty of additional helpings. – Kyle McGinn (Hatred Reigns on Facebook) 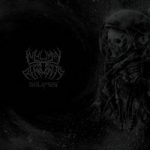 Inhuman Remnants – Solipsis (Eschatonic Records)
A three song EP with two songs being intro/outro leaves a bit to be desired. There’s a connection between the three tracks here but let’s call a spade a spade. This is a glorified single release. “Solipsis II” is a decent enough piece of modern death metal, with all of the relentless brutality that one could desire, with some technical and ‘core trimmings to round it out. But one song feels more like a tease than anything else. If Inhuman Remnants could come up with some more material for their next release, they could make a pretty compelling argument. But for now, this feels more filler than killer. – Kyle McGinn (Inhuman Remnants on Facebook) 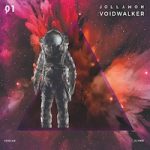 Jollymon – Voidwalker (Self-Released)
Stoner/rock act Jollymon return with their first album in 18 years with Void Walker. They aim to meld more space rock elements with harder, metallic ones, and they manage to pull this off pretty well. The guitar riffs are the main draw, providing some really groovy and chunky moments that have a bit of funk to them at times. Enjoyable and trippy leads weave their way in as well, and line up well with the more laid back vocal approach. If you long for the days of early 2000s stoner metal with some occasional bite to it, it’s hard to argue with what Jollymon has returned with. – Kyle McGinn (Jollymon on Facebook) 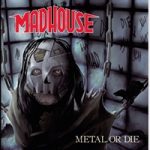 Madhouse – Metal or Die (Iron Shield Records)
A Teutonic metal band from the 80’s who released two demos, disbanded, and reunited in 2014 – finally issuing a full-length album with Metal or Die. The cultural sensibility and twin guitar power hooks will make you think of Running Wild, Grave Digger, and the pure German sound – although the vocals of Didi ‘Shark’ Schulz have more of a rambling, monotonous aspect to them. The drumming occasionally veers into thrash pastures, but the hi-hat/snare combinations aren’t in the main Madhouse skill set. “Machinery” has an old Anthrax vibe, while “Back in the Black” contains killer bass/twin guitar unison action that NWOBHM meets Running Wild fans giddy. Not bad, not exciting – middle of the road metal here. – Matt Coe (Madhouse on Facebook) 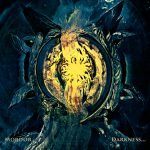 Mordor – Darkness… (Pagan Records)
Pagan Records — a label that is gradually starting to gain footing of late — specializes in Polish metal. It’s a cool idea since we often begin and end with Behemoth, Decapitated and Vader, three bands who will probably forever reign at the top of the scene. With that in mind, Pagan Records continue to throw out some choice, upstart bands, like veteran doomsters Mordor. Originally formed back in 1990, the band popped out two full-lengths in the 90s before entering a period of inactivity. Darkness…marks their first full-length in 21 years, a decidedly crisp, headstrong offering of doom, mixed in with barrels of extremity, as found on the excellent “Melancholy.” – David E. Gehlke (Mordor Facebook) 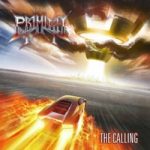 Primitai – The Calling (Dissonance Productions)
A heavy/thrash UK act, Primitai have been active for 15 years, as The Calling is the quintet’s fifth full-length. Vibrant riffing and mid-range vocal harmonies along with supplementary keyboard support gives “Curse of Olympus” a strong Rage affinity (Guy Miller also channeling some Peavy charm), while the follow-up “No Survivors” flies back and forth between thrash and traditional platforms. Catchy hooks abound, longer set-ups or instrumental breaks providing ample chances for these musicians to showcase their knowledge in context – allowing the listener to really sink deep into the material and take away something new with each pass. Sits well for those who like Bay Area thrash meets Teutonic power/traditional tendencies – meaning a great cross-pollination record in the end. – Matt Coe (Primitai official website) 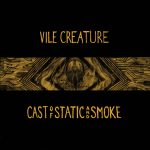 Vile Creature – Cast of Static and Smoke (Halo of Flies)
A doom combo (two of them, that is) from Hamilton, Ontario, Vile Creature kick around loose and free-form doom on Cast of Static and Smoke, their second full-length. As so often is the case with bands of this variety, it’s volume full-bore, with the guitars sort of dovetailing into their own giant sonic wall, all the while things get slowed down and played at half-time. Look deeper and you’ll find a band very much attached to its message of veganism and queer and trans rights, something works in tandem with doom that has more in common with say, a good chunk of 20 Buck Spin’s roster than the vintage mongers of the style – David E. Gehlke (Vile Creature Bandcamp)