Venerable, probably more defiant than they need to be, and surely reliable as fuck, Chicago-turned-Czech Republic death metal mongers Master initially made their hay in the untested mid-80’s, where there was no ample definition of death metal. Instead, mainman Paul Speckmann (vocals/bass) and co-patriots Death, Autopsy, and to a lesser degree, Celtic Frost and Venom, had to carve the sound essentially from stone, resulting in several genre-defining classics, as well as the platform to exist upon today. The band’s 1990 self-titled debut and  1991 On the Seventh Day God Created…Master albums remain very much beloved today, yet their recent output, specifically last year’s The New Elite and their new The Witchhunt are what keeps the band ticking.

With such factoids in tow, we grabbed Speckmann for a round of questions the electronic way, and as you’ll read below, the man doesn’t pull any punches when it comes to the state of death metal, resulting in a refreshing conversation with one of the underground’s true survivors. Read on…

Dead Rhetoric: Classic/vintage death metal has enjoyed resurgence the last few years. From your vantage point across the ocean, what do you think of it?

Paul Speckmann: Resurgence? What do mean by this band, reforming for the money? Yes, this is true, but bands like Master have been going strong all along; we never left the scene. It’s actually cool to see bands like Destruction and Kreator still crushing and going strong for sure, but they never left either. You have to smile with these cover bands that have reformed in the name of metal as well. I hope when I pass on no one plays Master covers.

Dead Rhetoric: Do you keep tabs on what’s going on with the Chicago metal scene? It seems like a different place altogether from when you were there initially…

Speckmann: No, I left Chicago in the early 90’s and never looked back. Not sure what is happening there other than Jungle Rot!

Dead Rhetoric: What do you make of the onslaught of classic death metal bands (Gorguts, Carcass, Broken Hope, etc) getting back together to make new albums?

Dead Rhetoric: When you got started in the 80’s and early 90’s with Master, how difficult was it to get noticed? Now it seems like any band copping Autopsy/Entombed gets signed…

Speckmann: It wasn’t difficult at all with bands like Benediction, Napalm Death and Carcass covering Master tracks when they began!  It was a different time and place back then, my friend. As you said, basically, every Tom, Dick and Harry are in a band these days and merely copy the old greats and get a deal. At least back in the day the aforementioned bands and myself were creating original music. Today, copy-cats rule the planet!

Dead Rhetoric: How near-and-dear do you hold the self-titled debut and On the Seventh Day to your heart? They’ve aged quite well.

Speckmann: This is a silly question as all the Master albums have had something to offer. Everything was recorded in a different time or place, but the enthusiasm and energy were always in the right place. The newer albums like The Witchhunt and Slaves to Society certainly have surpassed the first two. I live for the future and don’t waste time looking back. The band has achieved greater success these days than ever before, touring across the globe, playing the classics worldwide!

Dead Rhetoric: More recently, you’ve enjoyed quite a nice run of productivity. What can you attribute that to?

Speckmann: “Productivity,” as you so well put, it has never ceased. It’s just the promotion has increased once again thanks to FDA Rekotz and Clawhammer!

Speckmann: We rehearse twice per week but touring every month keeps the band in rare from. As for writing, I write tracks throughout the year every year and when the time for recording begins, I bring tracks to the table. This has never been a problem in the Master camp!

Dead Rhetoric: You’ve had Alex [Nejezchleba, guitars] and Zdenek [Pradlovský, drums] in the band for 10 years now. What do both of them bring to the table?

Speckmann: Zdenek brings great ideas to the drums and Alex brings decent guitar playing to the Master tracks. The guys and I work hard at our craft and this can certainly be heard on The Witchhunt!

Dead Rhetoric: What made you follow up The New Elite with The Witchhunt so quickly?

Speckmann: The guys were bored and needed money, so I wrote ten new songs and Alex brought in one track and rest is history. I never waste my time thinking about such things, really, my friend. When I am ready, we begin!

Dead Rhetoric: Operating the band out of the Czech Republic: What are the advantages/disadvantages?

Speckmann: There are no disadvantages. I moved to Europe in 2000 and have been playing shows and tours ever since. When I live in the USA there was little or nothing going on, only work. Here in Europe, music is my only work! 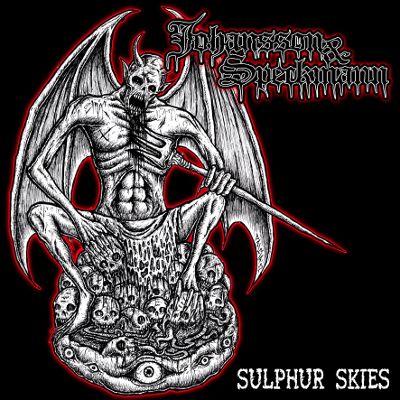