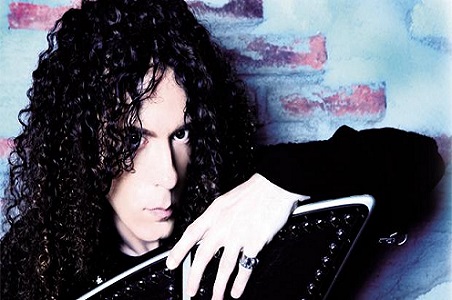 Dead Rhetoric: You achieve a nice balance between the instrumental songs, and the songs with vocalist, like “Sociopaths” with Dave [Davidson] from Revocation, and “Lycanthrope” with Alexi [Laiho] from Bodom, all the way to “I Can’t Relax” with Danko Jones. For you, was this top of mind when sequencing the album?

Friedman: Absolutely. This is by far the most intense album of my life so far, which means the density of the guitar, the sheer information of how much guitar you’re going to listen on this album, it had better be balanced out by some vocals or no one is going to be able to stand it. [laughs] I knew the first vocal thing I wanted people to hear was Danko’s. “I Can’t Relax” starts, and it’s just Danko’s voice with no band at the beginning. After four instrumental songs that tested your limits on how much you can stand, his voice really takes you into a new dimension. He just blew my mind with his enthusiasm and his abilities.

Dead Rhetoric: You have the track with Jason Becker, “Horrors,” and unfortunately, he’s the ultimate “What could have been?” guitarist. Do you do much reflecting on your time with him?

Friedman: Not really. It is the ultimate “What could have been?” The way it turned out, he might be inspiring more people this way than what he was about to become. Either way, he’s a huge inspiration to so many different people on so many different levels. I tend to look at it that way. I think he’s wonderful.

Dead Rhetoric: You’ve had some considerable success in Japan. Did you ever in your wildest imagination think you’d have this kind of impact there?

Friedman: No, not at all. The first time I went to Japan with Cacophony, I thought “This is the last time I’m going to come here.” [laughs] I didn’t know I’d come as much as I did, and God forbid, completely assimilate into society here to the point where I have no idea what’s going on in my home country. It’s embarrassing, but how many places can you live at the same time? So far, it has exceed anything I ever planned or expected to do. It’s all gravy.

Dead Rhetoric: And, you’ve done a lot cool things like TV commercials and shows. Did those things fall into your lap, or was it from making the right connections and hard work?

Friedman: Getting started in TV was the big opening door to everything. I had no intention to do that; I got asked to do a TV show that was a goof on heavy metal, so I wasn’t really into it. I gave it a shot and the day of the first taping, the biggest management company – who had put together the show – said they wanted to manage me. Since then, I’ve done 600 shows and all the other things like that. It opened up everything and gave me the freedom to do what I want in music, which is the main goal. It’s fun and I love doing it. It keeps my mind working and have something other to think about other than touring and recording, which gets you in a musical rut sometimes. Obviously, it’s extremely hard work and going out of the box to do crazy stuff. Every day is crazy.

Dead Rhetoric: Getting used to being on camera – cue cards, etc. Did that take some warming up to?

Friedman: No, I loved it. The thing that kept me into was the fact was doing it all in Japanese. I never had any hobbies growing up or on tour, but learning Japanese was a slight hobby. When I got good enough to do my interviews in Japanese in the 90’s, I got fluent. It really revs up your language stuff because you have to be in the moment. You have to say something really clever and really quickly. You have to read cue cards really fast. I really like the stimulating aspect of it, regardless of what the content of the program was. It was really good for my brain.

I was just talking about this the other day: If you look at my musical growth from 1989 to 2000, and then from when I moved here in 2004 and now, it’s absolutely revved-up. I can’t even explain it. I would have never thought I could have made an album like Loudspeaker back in the 90s. It’s beyond my scope of what I could have thought about and now coming to Inferno, it really makes me happy that I made some of the decisions I made. I think I was getting lazy before I came over here; I was getting really comfortable and when you come over here and you have to do different stuff all the time, you get challenged. When you have a musical career for a while, challenges get slimmer and slimmer, and you wind up repeating yourself.

Dead Rhetoric: And most guys, when they stop being challenged, they go the safe route just to keep a steady paycheck.

Friedman: Sure, and I understand that too. Sometimes I’ll see situations where guys are doing the same thing every day and I admire that as well. There’s the stability in that that I don’t have. Different things are suited for different people.

Dead Rhetoric: With Inferno getting a proper release in the States, will this territory become more a point of focus?

Friedman: Absolutely, and that was the point. This is the first album that I’ve done in a really long time that is an international release, simultaneous. It means I have to be in many places at once, like right now, but I plan to do an American tour, an American promo tour, a live tour. I’ll be touring in Europe this May and I’ll do stuff in Japan after that. I have to do a lot more cultivating outside of Japan, which I’ve done for the last X number of years. I knew that I was going to do it sometime and I wanted to be damn sure I was happy with the record. I wouldn’t do it on some half-assed record. My heart wouldn’t be in it.