Manticora – The Will to Live 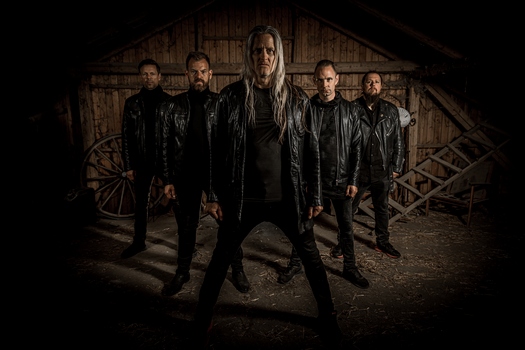 A band that has been a testament to putting in the work and pushing ever forward is that of Denmark’s Manticora. Their dark version of power/progressive metal has brought them through conceptual albums over the years, and most recently, To Live to Kill to Live – a direct successor to 2018’s To Kill to Live to Kill, has been released. A potent mix of personal storytelling and riveting heavy metal power, it’s certainly the strongest work of the band to date. Vocalist Lars F. Larsen gave us some of his thoughts about the album and it’s deeply personal nature, making conceptual albums, and some thoughts about the impact of coronavirus on touring.

Lars F. Larsen: It represents the last part of the book I wrote. The previous album was about page 1-149 and this new album deal with pages 150-334.

Dead Rhetoric: Given the personal nature of the inspiration of the two albums and book written (To Kill to Live to Kill), is there some catharsis in getting both the albums and book out there?

Larsen: It’s actually the perfect catharsis, I should say. I was attacked – completely unmotivated – by 3 assholes back in 1999, who broke my chin-bone and my nose, and I had some nightmares and some kind of PTSD, due to this, for me, completely un-comprehendible episode. I was waking up at night, bathed in sweat, and sitting in front of my computer for longer periods of time, just staring into the screen, grinding my teeth, and flexing my muscles to the max…..just to “wake up”, and not being able to account for those minutes, I had been staring straight into nothing. It was kind of eerie and I had to do something about it. After 10 years of this shit (and experiencing strange breathing problems as well), I think it was my brother who told me to write something about it. It didn’t matter what I wrote….just something about the incident.

So, I began writing about how I’d kill these 3 fuck-heads in my imaginary basement in my imaginary house, and at the same time, I had this dream about a small, Chinese boy, standing on a small dunghill in the dusk, cleaving insects with his Katana sword. I began writing a story about that as well, and suddenly I was thinking to myself: “Hey Lars – you’re actually writing a book”! Enter the story about the gruesome hitman, and there you go. A complete novel. After I pressed “enter” for the last time, I have not experienced one single nightmare, so I have to say that the therapy helped, and luckily something good actually came out of this horrible incident.

Dead Rhetoric: How does the writing for an album like this work, when you are working from a story that you also developed?

Larsen: We decided to do no more rehearsal room meet-ups, as that method has been beaten to a pulp, so we met up at Kristian’s house, where he has a room in his basement with recording equipment, etc. A small home-studio, so to speak. We’d meet up on Friday’s after work and each band member would leave for an hour and write music for himself. The only rule was that we’d set a tempo for the song, we wanted to write and with that in mind, Kristian went for a walk with his dictaphone, I’d be sitting in his living room with an acoustic guitar (which is how I write riffs), Stefan would be sitting in another room, with his electrical guitar, etc etc. After an hour, we met up and recorded ALL riffs that we had done, added drums on the computer, and began digesting things and put them together. We chose the best of the riffs and threw tons of material into the “later” basket.

In an adjacent room, we had a huge whiteboard, where we had all the titles of the songs (not all of them were there from the beginning as the book was developed alongside the music), and we’d be trying to match the feeling of the story in the book with the feeling of the song, we were developing. So aggressive songs for the ultra-violent stories and lighter riffs for the sad/sweet parts of the story. This is also why you’ll be hearing a lot of Chinese-inspired notes throughout both albums, as a lot of the Katana stories are taking place in various places and times in China.

We’d continue throughout the whole weekend, fine-tuning things on Saturday and usually, we’d have 1 or maybe even 2 songs finished by Saturday afternoon….then dinner, redwine, Gin/Tonic and suddenly a late-night session that would end up with a horrible hang-over on Sunday.

It’s been a gigantic logistic nightmare, to keep it all together, but I guess that’s also why it took so long for us to get the albums out. Nothing’s been left to chance, really…

Dead Rhetoric: The album has been recently released, how’s the response been to it so far?

Larsen: Insane reviews all over, actually. It is, by far, our best reviewed album ever, and our fans are saying the same thing. It feels a bit weird to say that we have done our best album, 23 years into the career, but I guess that when everyone else thinks so, then there must be some truth in it.

Dead Rhetoric: The band has involved with conceptual albums in the past as well. Do you feel it makes for a stronger impression for listeners?

Larsen: Not necessarily, but for us it’s important, to the brink of vital, that we tell a story at the same time, as making music. We want our listeners to involve themselves in the music – to understand why that strange note is sitting right there, after the chorus, or why that drumfill – that initially seems completely out of place – does actually fit the music.

It all relates to the stories in the music, and with the new method of releasing both a book and the albums, we have been able to explain things even further to anyone who’d like to read the book. It’s kind of a blessing, but also tons of work, hahaha.

We really don’t dig the idea of writing 10 songs, one of them becomes the single/video, and maybe another one is becoming a lyrical video…and 3 months later, all the other songs are forgotten, because there was only time/money to focus on those 2.

When writing a concept like this, we nudge people to listen to all songs and to take a stand. I like the idea of releasing the full package, so to speak, instead of just 10 songs that gives me a good vibe, but no meaning.

Dead Rhetoric: What inspires you when it comes to making a story concept, particularly one that spans more than one release?

Larsen: Well, on this new release, I obviously got inspired by the incident in 1999 and the other guys in the band got inspired by me, telling them the story, I guess – and also since they got involved in the writing. I asked them about certain passages in the book, when I was writing it, so they actually made some decisions about who of the characters were to die and who were to live, hahahaha.

Other than that, it’s really lots of different things. We read a lot in the band – at least we did in the past, and have found inspiration in books and previously also in the Cthulu mythology (The Black Circus 1+2 have a lot of Cthulu-myth in them, for instance).

Dead Rhetoric: How important is the relationship between yourself and Kristian as the backbone of the band?

Larsen: It is all-vital. I believe that if one of us stopped in the band, the band wouldn’t continue. It’d be Pretty Maids without Ronnie/Ken, Metallica without James/Lars or BurgerKing without Burger/King….doh….

Nah, in all seriousness, I can’t imagine making music without Kristian (so if he decides to stop, I’ll stop too), and frankly, I don’t want to. And without sounding too self-absorbed, there wouldn’t be a Manticora without me. So you can say that we’re both pretty vital for this.

Dead Rhetoric: How do you feel that Manticora has evolved since your start over 20 years ago?

Larsen: We have evolved immensely as human beings, but I think that’s a natural thing that comes with age and experience. We have done SO many things now….toured Europe 9 times, toured North America 2 times, released 9 albums, played in Japan and done many huge festivals in Europe, including Wacken Open Air 2 times – and along the way, we have had so much SHIT thrown at us, you can’t believe it.

But the shit that hits you in the face, tends to make you a calmer and wiser person, and so we have evolved from a band that wanted to do it all at once, to being a band that calculates our every move and to having the patience, which has created a super-friendly atmosphere amongst the musicians.

As musicians, I think that we’re just more focused and open-minded than we used to be. We’re not necessarily better musicians. but we’re definitely more open to ideas and to embrace what actually comes out of our twisted minds.

Dead Rhetoric: Do you have any bucket list type goals still for Manticora?

Larsen: I’d like to play shows in South America – a tour, if possible – and then I’d REALLY like to play in Finland as we have never done so, but other than that, I believe that we have done most of what’s bestowed upon us.

Dead Rhetoric: Do you have any concerns at how the live scene could end up changing due to the impact of COVID-19?

Larsen: Yeah, we are all very concerned about this. So far, we have lost revenue of some 8000€, on cancelled shows, and it doesn’t look good for the live scene at the moment.

I LOATHE the idea of bands, doing “live” shows through streaming. I think it’s an abomination and a huge pile of puke on the musical integrity of the bands. It’s the wolf, tamed into becoming a dog….bands, prostituting themselves for attention, if you ask me.

So, I hope we’ll soon have some scientists, getting a vaccine ready for the virus, so that we can all look each other in the eyes in a normal live situation again….and sooner, rather than later so this streaming-crap doesn’t get the chance to become the norm.

Dead Rhetoric: What’s planned for the band for the rest of the year, going into next year?

Larsen: We’ve been playing a show in Copenhagen last week and we have another one here in Denmark (very limited amount of people in the venue), so for the rest of the fall, we’re doing promotion for the new release, trying to set up some festival shows for next summer and will most likely begin writing some new material, if I am not mistaken…