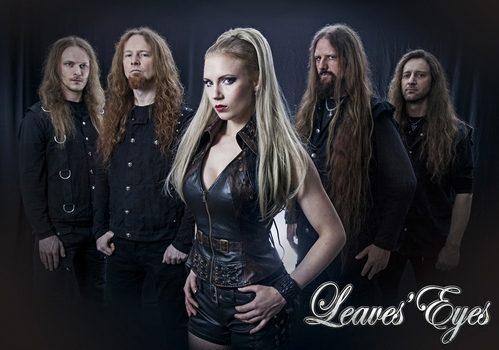 Earlier this year, the split between Leaves’ Eyes and former female vocalist Liv Kristine was at the very forefront of the scene. Given the age of the Internet and how fast information/disinformation can be spread, it didn’t take long for it to grow into a more personal and upsetting departure, with fans seemingly caught up in the middle. Rumors, gossip, it all found its way into the mix – but Leaves’ Eyes forged onwards, with a new vocalist Elina Siirala, injecting some feelings of rejuvenation into the veteran act.

Since Siirala has become part of the band, they’ve been busy to get themselves back out there. In addition to festival season in Europe, the band just put out a new EP, in part to showcase Siirala on vocals (it contains a new song, both electric and acoustic, and some re-recordings of older tracks). Now they have journeyed to North America for a tour with Sonata Arctica and Omnium Gatherum, which lead to a meeting with vocalists Alexander Krull and Elina Siirala before their show in Clifton Park, NY to talk about where the band is at currently, and what lies ahead for them.

Dead Rhetoric: In terms of Liv’s departure, was it unfortunate that it ended up in this big Internet mess?

Alexander Krull: That was not the plan at all. We made a statement together with the band, with Liv and Elina [Siirala], presenting her as the new vocalist in the band. Then it turned out that suddenly rumors were spread – the statement was attacked by our former vocalist as well, which was very disappointing for us. It was not a decision made from one day to another, or planned behind anyone’s back. Not at all. It [the statement] was coming up as a process, as things happened. After our personal separation [between Krull and Kristine], everything was solved. The personal side was solved, and the band side was solved – actually in a peaceful way.

But then, it happened that someone else popped up, in the personal life of Liv, and was affecting the band. Her therapist was affecting her side of life, and also the band. We were really surprised with what was said to us – no more tours, no more interviews, without the “therapist.” We were like, “what’s going on now?” It was not very nice to see what was happening. Speaking for myself, and not for Tosso [Thorsten Bauer], we supported her ever since she started her career. I was there when the label signed her, I was always on her side – as manager, producer, and songwriter. Then you see this – I’m a little bit surprised at how fast it can go, as someone goes there and manipulates, and does stuff like that.

On the other side, we were really, really lucky to find someone like Elina in that situation. We had the band meeting – Liv had told us that a tour like this would be her suicide, or whatever. There was no way that we could continue [with her]. We had to cancel everything or we had to find someone else, who could fill this huge role. Not just to fill in the big shoes of Liv Kristine, but someone who is their own character – charisma, strength, a great singer…also looking great [laughs] – the whole package. She had to be suited for the band. Because it is a band – not a solo project. It was never “a project of the Atrocity guys with Liv Kristine.” In the beginning we had that going on, and we had to tell everyone that it was a full band. We had other band members coming and going – it’s obviously a very important role, and we had to find someone who could not only fill her shoes, but also be refreshing and give us new possibilities in the music.

It’s all about the music. It’s about the philosophy behind the lyrics, and the concept of the band. Not the gossip that’s going on about “Alex replacing his former wife with a new chick” – bullshit like that. That was not at all happening – even Liv wanted to be part of looking for a new singer – it was not about private stuff. But we said, no, we will continue the band ourselves, so of course, it’s up to us who we want to work with in the future. It just so happened that we found Elina, and for both sides, I think it was very lucky. Also, it was a matter of time – we had to decide whether we would cancel Indonesia, European festivals/tours, and this [North American] tour as well…or we might have the opportunity to go on.

Dead Rhetoric: So Elina, what do you feel that you bring to the band?

Elina Siirala: I think, first of all, like Alex said, I don’t see myself as replacing Liv because that’s not possible. I think we are very different – as characters, as singers, and as performers. I think, hopefully, I bring something new, in terms of vocals – our styles are different. Maybe performance-wise – the voice is always going to dictate what you do with the music, so I think the future songs are going to show this more. We are still performing the old repertoire at the moment. I can just be myself, I’m not trying to copy anyone but just do everything as myself and hope people like it.

Krull: It’s been working out amazingly well. The so-called old stuff is working very well with Elina too. That was the idea behind it – not to have a copycat but have someone with their own charisma and their own signature, which is suiting to the way we do our music. And it’s working very, very well. All the guys, all the fans and friends, and the music business side as well – thought “oh is it even possible?” And they were all like, “Holy Christ! It’s amazing! We didn’t think it would work that well.” That it was a perfect match – these were the reactions that we had from the fans. We were, nervous is the wrong word, but looking forward to what the fans would say. Even the first show in Indonesia, which had 21,000 people, and we jumped right into the cold water, Elina especially. We just had to go for it.

I was very convinced when we were doing some production stuff in the studio, that it would be really great for the band in the future. When we played in Indonesia, the chemistry was there – everything was clicking. Even crew guys were like, “wow, this is awesome. It’s like another era is starting right away.” I don’t want to say a new level – we will see. But a new era is embracing Leaves’ Eyes. When we were touring in Europe and they all knew us from previous tours – promoters and local crew – and they were like, “new singer – awesome!” They enjoyed it, as the fans have as well.

Dead Rhetoric: So Fires in the North is the new EP – was it meant to introduce Elina as the new vocalist and set the groundwork for people who haven’t seen the band live lately?

Krull: Both – it was kind of a demand from the fans. We re-recorded three songs from King of Kings, and they thought it sounded cool and wanted to buy it. There’s no live album and nothing we could record in a professional way. So we decided to bring out some proper recordings, and something brand new –also showing her side as a singer, with the acoustic version of that song. That was always a big strength of Liv, to have the acoustic versions and soft songs, not only the heavy tracks. It’s great to see that all these things with Elina too.

Just to say it, we wish all the best for Liv. We offered to help her with the solo stuff too, but she goes her own way. There is still daily contact, because of our son Leon. People have the wrong picture of what was happening, I guarantee you. But I don’t want to go out with the whole story, because I want to protect my son from that. I don’t him to get any blame at school or whatever – it’s enough already. A lot of crap people were writing – it was never the intention – we were all friends for ages with Liv. Tosso was writing songs for her and stuff like that. We have band members who work for us who were working for her solo band. So if everything was true – what everyone was saying, how is it possible? How would we turn from [normal] one day to assholes in another? It makes no sense at all.

Dead Rhetoric: With the one new track and the acoustic version, do you have plans – once touring dies down – to sit down and write more new material?

Siirala: Yes, absolutely. But now with all of the touring – all of the recording and releasing, it takes a lot of time. You have to plan ahead, so we’ll have to see when it is going to happen. Hopefully soon – hopefully sooner than later, but it is in the pipeline.

Krull: We have kind of a schedule already. But it’s hanging with a few tour offers coming up. The label said that there’s so much opportunity so you should grab it. King of Kings is still selling really well, and the Fires in the North EP is sold out again! They could not deliver them for the acoustic shows. We have some EPs on the road now so you can get them here. I heard it was sold out everywhere, and it has been that way since the start. They are reprinting so it will be all okay, but it’s good to hear that it is going that well! We have an idea – we will record definitely next year, the production is in process already and we are writing songs. We hope to get it out, if not 2017, which I think is not realistic because of new tour offers – so we will go for 2018, early on. That’s the plan.

Dead Rhetoric: I know that Leaves’ Eyes have not been back to the United States in some time – Elina, is this your first time over here or have you been through with other bands?

Siirala: No I haven’t played, I’ve just been here once before. This is the first time playing so it’s very exciting.

Dead Rhetoric: So do you feel that there’s a difference in playing in North America as opposed to over in Europe?

Krull: Yeah – in a way. It’s such a huge continent. Even within America there are different types of audiences. It’s very interesting and it’s awesome. We are really proud to be here and back again. I would say the metal community, it’s great to have that international family. So there might be differences, but it’s only positive to come here and play for the fans and have such a warm welcome. There’s enthusiastic fans, which is awesome.

Other places you have the opportunity to play more often and it’s interesting to meet people again. There are people from the States even coming to certain festivals in Europe who say, “Hey I saw you guys in Texas” and it’s awesome. There are also places like Latin America where you have great shows and you have these adventures, in a way, for a European guy coming and playing 10 different countries and they all have their own cultural stuff going on. For us, we have now toured 50 countries on 5 continents – it’s like an adventure always and this one is as well. It’s about 6.5 weeks. This is probably our longest run, and we are looking forward to just starting it. Yesterday there were some technical issues – and there were 7 bands in one night. Today is the same – I think that tomorrow we are going to the normal version of the tour.