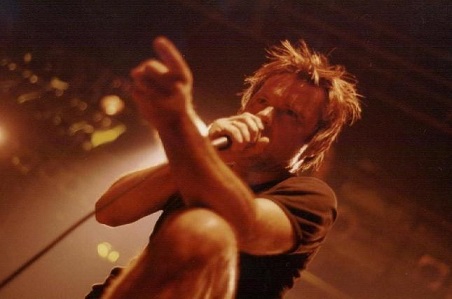 Fifteen years doesn’t seem like that long of time considering how much longer people can live in today’s world. When thinking back to 1998, my then 27 year-old persona would begin to make a series of decisions that would eventually set in motion life in marriage, a fresh career, and adopting two children who cannot help but change your perspective beyond the limits of time and imagination.

The tide in America was also turning for metal after a long drought where grunge, alternative, and nu-metal ruled the general media/ populace’s attention. Other parts of the world like Europe, Japan, and South America never lost sight of their love for the genre though- so it shouldn’t be surprising that many acts from those lands would infiltrate North America in a better way. Guitarists started reigniting with lead breaks that weren’t just ‘shredtastic’, but also worthy in terms of emotional connection and context.

Angel Dust – Border Of Reality (Century Media)
I realize this release didn’t get much attention stateside in comparison to the follow up Bleed, but these Germans returned to the scene without missing a beat. A little more power metal than the 1980’s thrash-oriented predecessors, the fiery Bernd Aufermann guitar licks that open the title track, the straight-forward mid-tempo crunch for “Nightmare” and their spirited cover of Rainbow’s “Spotlight Kid” would signal the vitality of the genre and prove Teutonic metal is always reliable and dependable.

Bruce Dickinson – The Chemical Wedding (Sanctuary)
While contemplating his return to the Maiden fold, Bruce managed to make a few killer solo offerings- of which The Chemical Wedding may live on far beyond any of the Blaze Bayley-led Maiden efforts in the same decade. Proving you could possess a heavier guitar tone thanks to guitarist Roy Z and his production work and still be traditional/ melodic, check out “King in Crimson”, the Harris-like bass antics throughout “The Tower”, and the exotic, emotive “Jerusalem” to remember the Air Raid siren still had a lot of creative songwriting and output left in those years.

Eldritch – El Nino (Inside Out Music)
This Italian band hit the jackpot with this studio album, finally separating themselves from the Dream Theater-ish clone tag on their third studio platter El Nino. Slightly tempering the technicality with a little bit more heaviness and ‘groove’ worthy parts, there’s no denying the harmony and melody elements of “No Direction Home”, personal favorite “Heretic Beholder” with its evil main riff and 11:51 epic title cut closer.

Evergrey – The Dark Discovery (Gothenburg Noiseworks)
A Swedish band who seemingly came out of nowhere with their debut album. The Dark Discovery had elements of progressive metal, power, and even extreme elements at times- along with the bluesy, clean delivery from guitarist Tom Englund that needed to be heard on a continuous basis. Picks to hear include “Blackened Dawn”, the guitar/drum synchronization duels that make the title cut, as well as the creeping, crawling riff elements against a slower tempo backdrop for “Trust and Betrayal”. Their first performance on US soil at the Powermad festival would also go down as goose bump city for many in attendance, a sign that the band would make their mark with future recording and touring excursions.

Helloween – Better Than Raw (Raw Power)
Many of you reading this probably hold the Keepers Kiske-led saga in highest regard from these German veterans. As far as the Andi Deris fronted era, Better Than Raw needs to be in the running for one of their best. Be it the aggressive guitar stance for “Push,” normal happy fare with progressive drumming within “Falling Higher” or the commercial leanings that drive home choruses you can hum for days with “Hey Lord!” or “I Can,” top to bottom Helloween proved that their early 90’s missteps of Pink Bubbles Go Ape and Chameleon were a distant memory.