Never fear, metalheads – I haven’t abandoned the deep search for buried treasures of metal from the past. Life, family, work, and other obligations can often take me away from these endeavors, but I feel the time is ripe to return to 1994, a year notable in the metal world especially in America, as most record labels were dropping bands like flies and calling this style anything but what it was. Grunge, alternative, and the start of nu-metal would take shape; melodic lead breaks within songs were starting to phase themselves out, and Headbangers Ball on MTV was on its last legs.

Through the good fortune of a Midwest touring jaunt as a tour manager for a New England band, that summer I would take in the Milwaukee Metal fest, seeing Slayer headline a few months prior to their release of Divine Intervention, witness the impressive stage shows of Morbid Angel and Overkill and understand the grim reality of multi-stage, 100 bands + in two day festival action warts and all. So even though the tides were changing, a lot of bands stuck to their guns and released some worthy albums that may have been lost in the flannel and smoke haze. Here are some records that I think deserve a more intense listen and appreciation from that year: 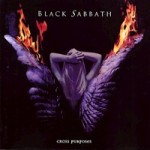 Black Sabbath – Cross Purposes (I.R.S. Records)
A lot of people look at the Tony Martin-led era as the black sheep of Sabbath discography, but I feel there are many hidden jewels to unearth if you can come across these records. Cross Purposes has a lot of the early classic Dio feel, yet the subtle swing/rock groove from Bobby Rondinelli that made the mystical “Cross of Thorns” and deeply bluesy doom-meets-power crusher “Immaculate Deception” stand up well in their tremendous catalog of songs. 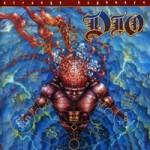 Dio – Strange Highways (Reprise)
The sixth studio album would be the first for Dio with guitarist Tracy G, and I think his slightly modern approach worked well for the dragon master to bridge the gap between his conventional fantasy/ rainbow themes and gain new appeal through an angry youth culture. “Jesus, Mary and The Holy Ghost,” the gloomy title track, and “Blood from a Stone” are just three premiere tracks from this severely unheralded release. 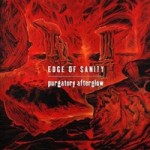 Edge of Sanity – Purgatory Afterglow (Black Mark)
Dan Swanö and his Swedish progressive death metal troop Edge of Sanity continued to throw curveballs on this fourth studio platter Purgatory Afterglow. Be it the punk-ified “Black Tears,” the doomy meets 70’s epic rock riff groove for “Blood-Colored,” or haunting 7:51 progressive opener “Twilight” that shimmers from clean keyboards against clean vocals, then picks up into this energetic, low death riff that kicks your teeth in – it’s classic EOS 101 here. [Damn right this is a classic – ed.] 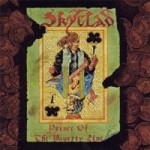 Skyclad- Prince of the Poverty Line (Noise)
Most of your folk metal groups that have gained traction owe a debt of gratitude for the Skyclad discography. The marriage of witty lyrics full of smart personal/political insights and musically moving through electric guitars, bass, drums, and fiddle, Martin Walkyier survived the Sabbat break up just fine, thank you, because songs like “Civil War Dance” and fiddle/ guitar jig worthy “Sins of Emission” were not like anything else coming down the metal pike in the mid 1990’s. 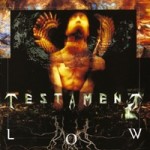 Testament- Low (Atlantic)
Coming off of the commercial (and musically) disappointing The Ritual, guitarist Alex Skolnick would jump ship for Savatage as drummer Louie Clemente simply couldn’t sustain the rigors of playing thrash. Given a new lease of life in guitarist James Murphy (Death, Obituary), plus a more proficient drummer in John Tempesta, the Bay Area veterans set about dialing in a heavier record for Low, record company be damned. Who can deny the brilliance of “Hail Mary”, the ripping title cut, or attacking riff mastery “Dog Faced Gods” where Chuck Billy first unleashed the lower growls that give Testament a fierce edge.