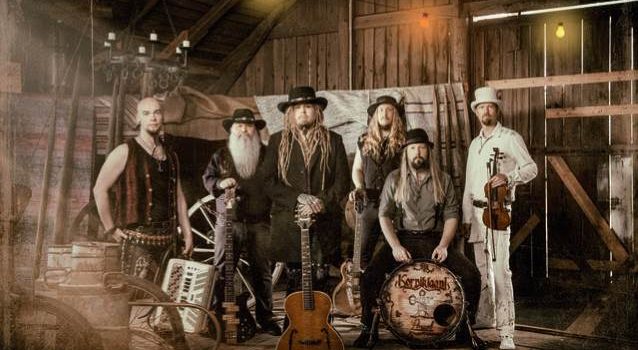 One of the pioneers and continued leaders of the folk metal scene, Korpiklaani have been a perpetual force for ten albums and over two decades. Their particular brand of folk metal is easily identifiable, and while some songs over the years have been very ‘party-oriented,’ there’s been a more mature side to the music that has continued to evolve over the last few albums. The recently released Kulkija represents their strongest foot forward in this regard.

Including a more melancholic and restrained side to compliment the more uptempo, traditional tracks, Kulkija is a very well-rounded effort for Korpiklaani. A refreshing step considering the number of releases they have under their belt. With a new album out, and a US tour approaching, we were able to grab bassist Jarkko Aaltonen for a round of questioning. We discuss the band’s evolution and new album, live performances, and more.

Dead Rhetoric: With 10 albums in, what continues to be your driving force in creating new music?

Dead Rhetoric: How do you feel that Korpiklaani have advanced, or matured, with Kulkija?

Aaltonen: I think someone actually even mentioned that in a review, that we were getting older or more mature. We have been doing this for quite a long time – so of course you get older and you change in many ways, more than just musically. But there are things that you don’t notice as much. People start pointing things out, like, “This sounds more adult. There’s a more mature thing you are doing.” We are like, “Oh, we are adulting now!” Everything that we do, not just the albums, honestly the crazier and younger days are behind. Everything has become accidentally more professional and more grown-up in a sense. I think the music has changed a bit, in that we have gotten better – the songs are better written, the arrangements are better, and the production is better. If that is getting old, then so be it.

Dead Rhetoric: With all of those albums, each time around you are adding in more experience too.

Aaltonen: We don’t really plan much ahead of time, when it comes to the albums. We don’t decide in advance if we are going to do one thing or another. But from the past albums, you learn things that you won’t be doing again. All of the things that you see afterwards that you should have done differently, you try to avoid that in the future. So that way, you are bound to get better every time. Unless you figure out how to make new mistakes.

Dead Rhetoric: What do you feel were Janne Saksa’s contributions to the production?

Aaltonen: The reason why we wanted to change producers was that we sort of had an idea of where we would be going, sound-wise and production-wise. We also sort of knew that we couldn’t do that with our previous producer. We had done a lot of good things with him and we got a lot better in many ways, but the things we wanted for this album would not work with him. So we were looking for a new one, and Janne had told us previously that if we needed a producer, he would be willing to work with us.

So we had a chat with him and he had a similar idea to how the album would sound and how the studio work would be. It worked out exactly like we wanted. We wanted a more natural and raw sound – something less polished and produced, and a bit of a fresher attitude on the violin and accordion. We decided not to aim at perfection, musically, but have it fresh so it would have a beautiful solo or magnificent vocal line, but it wasn’t going to be perfect. Janne was the perfect guy for this approach.

Dead Rhetoric: Given the idea of ‘The Wanderer’ as the new album, what do you feel Korpiklaani’s journey has been so far?

Aaltonen: Sometimes it’s like going in circles [laughs]. We end up at the same spot every time. Musically, we have come a long way. If you take the first album and the new album and listen to them, you will notice there’s quite a few differences. But if you listen to all 10 albums in a chronological order, we have never really changed that much. It’s been more of a natural musical development. At the same time, we have toured the world a few times. It’s been a journey, but I really don’t know where we started or where the end will be, but we are certainly traveling somewhere.

Dead Rhetoric: Do you still feel like you are learning new things as a band?

Aaltonen: I’d like to think so at least. Everyone is getting older, but I would like to think we sort of learn things. I think we have been doing that. Musically, the few line-up changes we have had in the past has made a huge difference. The band learned something, even if the individuals didn’t [laughs]. But we do learn – we try to look at what other people are doing and trying to avoid their mistakes. We have matured, as we were speaking earlier, in that sense.

Dead Rhetoric: Being that Korpiklaani is one of the more famous of the folk metal bands, what do you feel unifies the idea of combining folk music and heavy metal?

Aaltonen: With our band, it’s a bit different than many other bands of the same genre, because this band was basically first with the folk thing. Everything started from the folk part, and then the heavy guitars and drums were added later. So that was a natural progression that the band had made. So I never really thought of there being anything strange in that combination, because that’s what we were doing. Technically, when it comes to production and the live-sound, that’s where you get the problems. You have all of these things going on, and you’d like to hear them all as well. But musically, I think it comes very naturally to us.

Dead Rhetoric: I saw somewhere that someone in the band advised listening to the album as a whole. Do you feel that idea is starting to become a lost art?

Aaltonen: It is a lost art, and I hate myself for becoming one of those people. Everything is so hectic nowadays that we don’t have the time to listen, but of course you have the time, you just need to take the time to do it. But you are absolutely right – it is a lost art. Everything is about Spotify or YouTube or whatever. I remember growing up, you had money to buy one LP in a month or something like that, and then you get that LP and you listen to it a million times from start to finish. You read the linear notes, and you even knew which company printed the sleeve. You read all the fine print. That is definitely gone now.

I do understand that when we have an album that is 70-something minutes long, it’s a big demand to ask someone to sit down and listen to it. We know it’s a problem, but we still make the albums as one whole thing. So if there is someone who is willing to listen to it start to finish, there will be some logic to it. Sadly not as many people notice these things anymore.

Dead Rhetoric: I’m in that minority – I can’t do singles or anything, I really like to just sit down and hear something from beginning to end.

Aaltonen: I love singles – the actual 7” releases. I have a huge collection of those. I think it might be the greatest release form, for certain purposes. But then again, an album is an album. But I love the old school way where you have a single and you have the B-side that was nowhere else.

Dead Rhetoric: What’s most important at this point when it comes to the band’s live performance?

Aaltonen: I have no idea – but we have really sort of tried to become a better live band. People think that our songs are simple, but they are really fucking difficult to play live properly, like they are on the album. There’s so much going on, and we are trying to get to the point where people would hear the same music and the same sound live as they hear on the album. Maybe this is one of the things that we are slowly learning.

Dead Rhetoric: With the simple aspect, do you feel that is due to the drinking songs that have been written through the years?

Aaltonen: That is one thing, yeah, because many people think that the band is only about vodka and tequila. We just did a tour in Russia – the whole country from west to east and we played 11 songs from the new album live. In that sense, we have musically come a long way from “Vodka” and “Beer Beer.” I’m not saying there’s anything wrong with those songs, and there’s nothing wrong with people loving that stuff.

But sometimes it does bother me that there are so many people that never pay attention to the other side of the band. I love playing “Vodka” live – the crowd goes crazy and it’s a good live song, but at the same time, I’m quite sure that Tony Iommi is not so happy that he has to play “Paranoid” every fucking night when he has written some of the greatest heavy metal songs of all time – dozens of them – and he has to keep playing “Paranoid.”

Dead Rhetoric: You will be touring with Arkona soon here in the US. What else do you have planned as we finish up 2018?

Aaltonen: The only thing going on for this year is the North American tour. The next thing we have planned is a European tour with Turisas, so as far as I am concerned, after the US tour, it’s going to be a bit of a winter holiday.